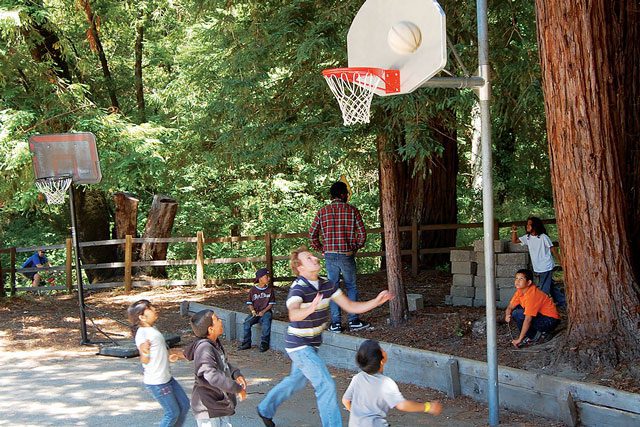 To be a kid

Located on 206 acres overlooking the Pacific Ocean in the coastal range of the Santa Cruz Mountains, Redwood Glen Camp in Scotts Valley, Calif., gives children the freedom that many of us took for granted: a chance to just be a kid.

Every summer, The Salvation Army’s Redwood Glen Camp hosts approximately 1,000 children between the ages of eight and 16. During their one-week stay, campers have the opportunity to learn new skills and experience the outdoors while remaining centered on the Christian faith.

Camp Director Ed Covert explained that he looks for program activities that are not only fun for campers to participate in, but that will also help combat summer learning loss.

“Over the last few years, we have migrated our approach to camp from viewing it as a purely recreation and play perspective to viewing it more through an education lens,” Covert said.

He explained that he found a variety of resources and studies that tracked and detailed the impact of summer learning loss—claiming a loss of around 70 percent of the knowledge gained throughout the school year.

“As we look at each of the electives we provide and other program areas, we identify the scope and sequence of what the staff is going to teach and what they hope to accomplish and how that will help combat summer learning loss,” Covert said.

A popular elective and one that Covert enjoys watching is archery. Out at the archery range, instructors will fill balloon targets with strips of paper letters. While the campers retrieve their arrows, they will simultaneously pick up the pieces of paper from their balloons. If they can make a word out of their letters, the campers will earn extra points for themselves and their cabin.

“They are having a great time shooting arrows and popping balloons, and we as instructors are getting the opportunity to contribute to reinforcing their literacy skills,” Covert said.

Redwood Glen Camp focuses on giving children opportunities for adventure and challenging their imaginations while inspiring them to meet great people. Not only are the camp counselors well trained and excited to meet the new campers, they take an interest in each individual. Covert believes and hopes that by the end of camp, every camper will take away a belief that God loves them deeply and that regardless of their current circumstances, they are going to find hope and opportunity.

“The core values that we try to impress on the campers first and foremost are that God loves you deeply and wants to have a relationship with you. I want kids to know that and to be able to experience the depth of God’s love and presence in this place and in their lives,” Covert said.

In reviewing the demographics of the populations the camp serves, Covert realized that many of the kids tend to be fairly transient. In order to follow up with those that attended the camp, Covert and his staff put together a spiritual well being report from data collected through surveys and input from counselors in hopes that once this data is sent to the corps officers, they will follow up with the kids in order or influence and guide them.

“It is really critical that we have continuity in our staff and retain as much of the ‘cream of the crop’ staff every year so that for those kids who do come back, they have some familiar faces to see and can re-engage with them,” Covert said.

Instead of setting goals for the camp and those that attend, Covert likes to come up with a set of core values that he wants the kids and staff to experience. By beginning with the end in mind, Covert creates a set of values that he and his staff agree to honor and protect in order to ensure that the kids can experience and appropriate these core values for themselves.

Covert believes that one of the camp’s biggest strengths is its commitment to guiding the discovery of the hope of the Gospel.

“You cannot come through the gates of any Salvation Army camp and leave the same person you entered as,” Covert said. “God’s power and presence is alive and evident in the created order of what you see around you when you come into these places. Our greatest strength is to be able to give to people and to introduce them to the creator of all. Being in a position to guide people’s discovery of who God can be in their life is one of our biggest strengths.”

Making a difference in a child’s life is what Covert loves to see the most. He views the week at camp as an opportunity to get away from anything and everything that is going on at home. Giving children the opportunity to put their worries behind them, even if it is for a short amount of time, is something that brings out a lot of emotion in Covert.