Ready to serve: Joyful Intercessors ordained and commissioned as lieutenants

General André Cox brings message at Commissioning and Ordination service.
By Karen Gleason –
The West’s 50 cadets of the Joyful Intercessors Session became the territory’s newest lieutenants during the Commissioning and Ordination service June 4 at the Terrace Theater of the Long Beach (California) Convention Center. General André Cox spoke at the meeting, calling everyone present to mobilize for God’s kingdom.
Before the entrance of the Joyful Intercessors, Chief Secretary Colonel Douglas Riley welcomed the  congregation and suggested that everyone, in this “holy time [and] holy place,” disconnect from the secular world and devote themselves to consecration to God. He then led the hymn, “Holy, Holy, Holy.”
Members of the Territorial Creative Arts Ensemble performed “Who Do You Say That I Am?”—a Scripture presentation of the names and characteristics of God.’ 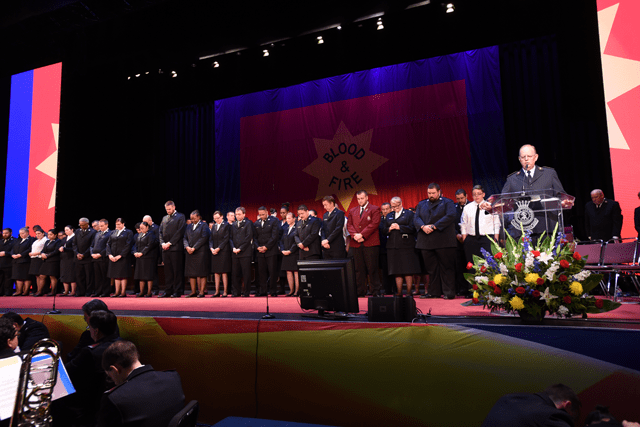 College for Officer Training Principal Major Brian Saunders quoted the Joyful Intercessors Session verse: Rejoice always, pray continually, give thanks in all circumstances; for this is God’s will for you in Christ Jesus (1 Thes. 5:16-18).  This is especially good advice, he said, if you’re a Joyful Intercessor. He commended the cadets to the Western Territory as being ready to serve God as officers in The Salvation Army.
In keeping with tradition, the cadets marched in one by one to the sound of the band playing, “All There Is Of Me,” reflecting their personal sacrifice to a life in service to God. They wore white gloves, a symbol of clean hands and a pure heart.
After the flagbearer positioned the session flag, the massed cadets sang “By His Hand.”
In unison, the cadets recited The Salvation Army Affirmations of Faith to Riley, and promised to adhere to them at all times, to love and care for others and to be faithful officers of The Salvation Army.
Territorial leaders Commissioners Kenneth G. and Jolene K. Hodder then received the cadets, individually or as couples; Jolene K. Hodder read their life verse and Kenneth J. Hodder ordained each as a minister and commissioned them as lieutenants in The Salvation Army.
Jolene K. Hodder gave the dedicatory prayer. 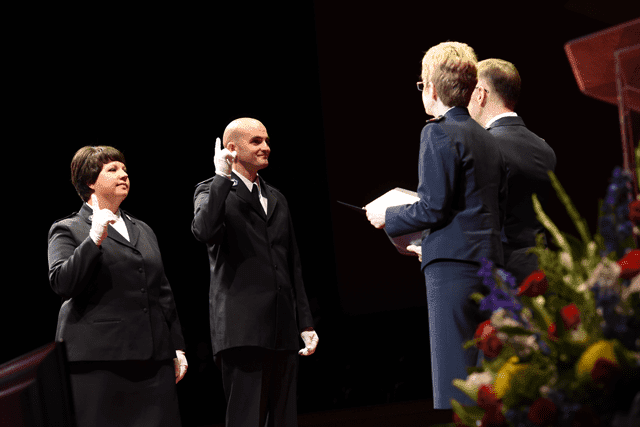 Lt. Perfecta Weeden gave her testimony, saying she felt “overwhelmed by the love and support in this room, the visual evidence of answered prayers on the stage, and most of all, the lengths through which God allowed me to go so that he could reclaim me as his child.”
God never gave up on her, she said. She quoted Proverbs 3:5-6, and noted that for her and her fellow Joyful Intercessors: “God is not done with us yet.”
Commissioner Silvia Cox read the Scripture, Hebrews 2: 1-11.
In his message, the General said there is no better day today—Pentecost—to ordain and commission new lieutenants.
“We recognize the coming of the power of the Holy Spirit…God is calling us to go out into the world,” he said.
He told the congregation that it is not just the responsibility of the cadets to spread the Good News, but that it is the responsibility of all of us—we are all called by God in some way to serve him in this hurting world.
As for the Joyful Intercessors, he said, “These are not going to be toy soldiers.” Instead, they will be on the front lines in service to God.
Finally, Christ preached peace for all people, he said. To find this peace, we must accept his invitation into a relationship with him.
After the altar call, Cox invited those people called to Salvation Army officership to come forward, and the stage filled with candidates and prospective candidates.
Colonel Colleen Riley brought the service to a close with a prayer and choral benediction.