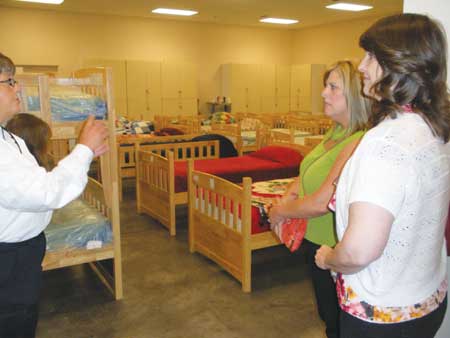 Captain Lisa Smith, director at The Salvation Army Berberian Homeless and Transitional Living Center in Modesto, Calif., spends a portion of her time networking with the Stanislaus County Sheriff’s Department in an initiative created as an alternative solution to overcrowded jails in the area.

To reduce the number of inmates in California’s 33 prisons to 137.5 percent of design capacity, the “Jail Alternatives” component resulted from the state’s realignment bill that places the care and responsibility of low-level inmates into the hands of individual California counties. It was ordered by the Three-Judge Court and affirmed by the U.S. Supreme Court in June.

The Stanislaus County Sheriff’s Department began the Jail Alternatives program with the Berberian Shelter in August, paying for five beds for low-level (non-violent, low risk) inmates who have been sentenced to house arrest, but have no home.

“Basically, it is a place for the inmates to stay until they finish their sentence or find a home,” Smith said.

The $74,000 initiative is completely underwritten by the Sheriff’s Department with the possibility of adding five more beds in the center. This new endeavor is also made possible by the recent remodel of the shelter.

The inmates are treated as transitional living clients and provided with case management and life skills services. They “own” and maintain their own areas—men and women reside in separate sections—and are required to wear ankle bracelets.

“Many of these non-violent, low-level offenders have addiction issues. The clean and sober living environment is good for them and they do have accountability. This is a chance for them to rehabilitate and also prevent them from going back to prison,” Smith said. “To date, we’ve not had any trouble. In fact, the inmates are very helpful and they’re part of the life of the building. They socialize with others, volunteer and help out. They want to stay busy.”

The program has produced two success stories to date: a man found an apartment and is now living independently, and a woman finished her sentence and will be going into the Berberian transitional living program as soon as a bed is available. She starts a nursing program in January 2014.

According to participant Antoinette, “Coming to The Salvation Army has given me the opportunity to have a healthier self-image and a blessing in serving other people.”