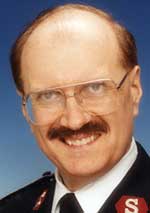 Raymond L. Peacock was born in Denver, March 9, 1942, to Lester and Helen (Bartlett) Peacock. He was commissioned as a Salvation Army officer with the Heroes of the Faith Session in 1964 and served at corps in Spokane, Centralia and Pasco Temple, Wash. He was then appointed to the School for Officer Training as the field training officer in 1967.

Peacock acknowledged three callings: first, to be a Salvation Army officer; second, to be a social worker; and third, to encourage young people. Always expecting the best of himself and desiring to improve, he earned a bachelor’s degree in Sociology and Psychology from LaVerne College; a Master of Social Work from the University of Hawaii; and a Doctorate of Ministry, Leadership Development from George Fox University.

Even in retirement he continued working and was instrumental in helping to raise funds for the new Harbor Light Center in Denver. 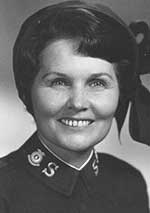 Jean Foote was born June 3, 1921, in Breckenridge, Minn., to Hazel and Loren Foote. She had a brother, Loren, and a sister, Marian. When she was 8 years old, her family drove from South Dakota to Washington in a brand new car that her mother had won from a contest on a cereal box.

Upton entered training school with her husband in 1946 and was commissioned with the Warriors Session in 1947. Their careers spanned 40 years and included corps officer appointments in Los Angeles, Lincoln Heights and Inglewood, Calif.; Hilo, Hawaii; and Tacoma, Wash. She served as the divisional Guard and Sunbeam director in the Northern California and Southwest divisions; as League of Mercy and Home League secretary in the Southern California Division; and as director of the San Francisco, Denver and San Diego Adult Rehabilitation Centers.

Upton was preceded in death by her husband in 1988.