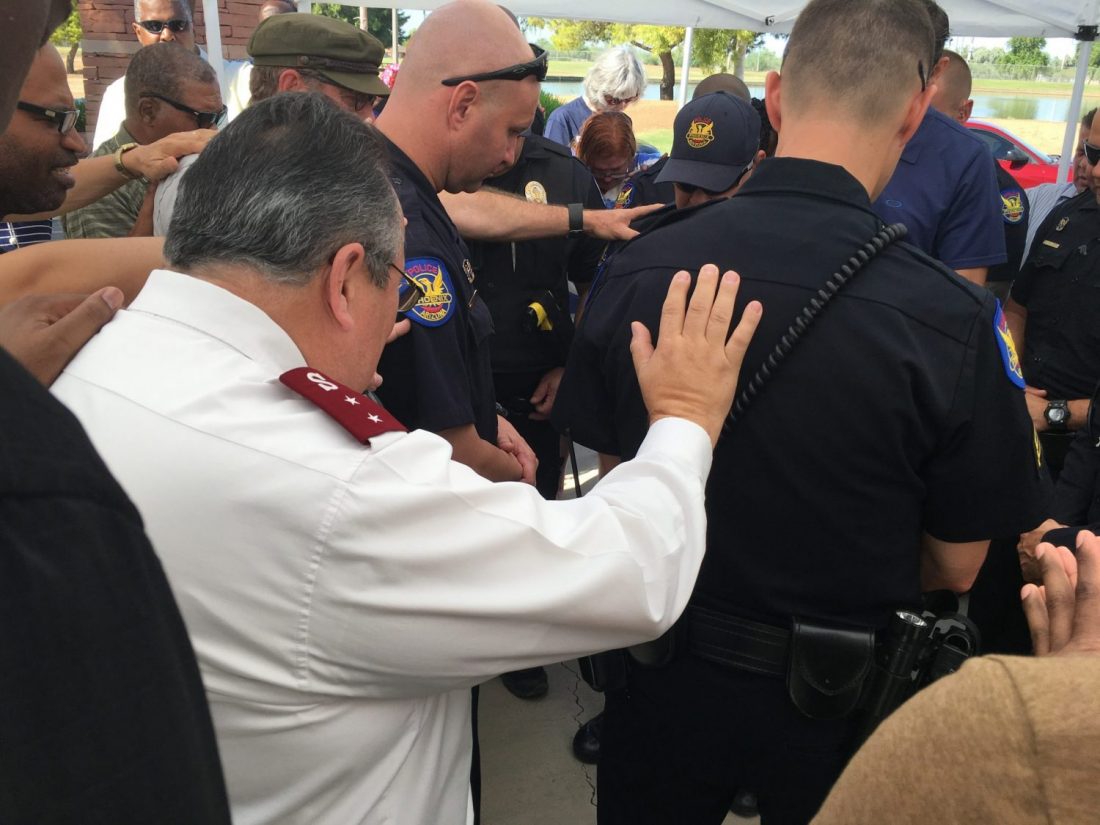 The Phoenix Maryvale Corps is helping to rebuild community relationships through servant leadership.

The Salvation Army and law enforcement are working diligently to help make their community in Phoenix, Arizona, safer, not by the use of force and fear but by the power of understanding and prayer.

Through the Faith and Justice Program, the Phoenix Maryvale Corps, several other local churches and the Phoenix Police Department have been on a two-year mission to rebuild community relationships through trusted servant leadership.

It’s the program’s vision to foster partnerships with the community, schools, businesses, law enforcement and the faith community to enhance fairness and mutual respect in the socioeconomically troubled eastside neighborhood of Phoenix.

“We all have a vested interest in the area,” said Captain Joseph Cisneros, Corps Officer of the Phoenix Maryvale Corps, who has taken a leadership role in the program. “We want to be more visible in the community. We are pastors of the community, not of four walls. We are eager to go into the community and help clean it up.

“We are a community of faith—all faiths,” he said. “We try to be inclusive, not just Christians. We want to introduce Muslims to Jehovah Witnesses, introduce Mormons to Jews…We focus on prayer and to be witnesses.”

The program began in fall 2015, pioneered by pastor Warren Stewart Jr. of The Remnant Church. Since then, several local churches have answered the call to become leaders in the community, including The Salvation Army.

The churches and the Phoenix Police Department hold community-oriented events such as the Young Engagement Forum, a Foster Care Community Awareness Gathering and a variety of townhall meetings among others.

They also take faith outside of the four walls of their churches and into the community, holding numerous open-air prayers. 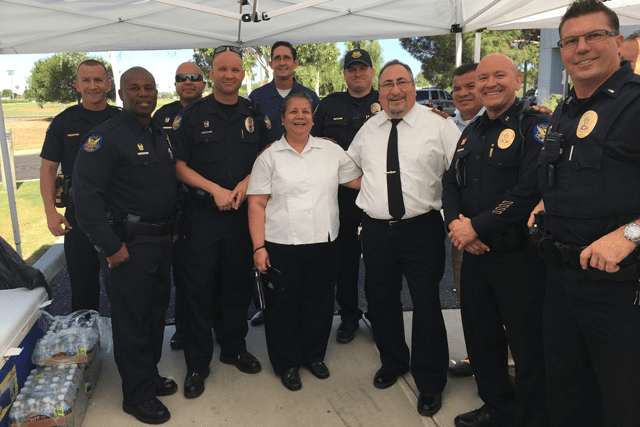 It’s all about bringing people together, hearing their stories, and understanding that we, as people, deserve to be loved and respected, no matter of skin color, uniform or faith.

“I want to invite all of our neighbors, our immigrant neighbors, our Mexican neighbors, our Muslim neighbors—anyone who feels ostracized in our society. I want you to feel welcome in a church community,” Stewart said in a short video on the Faith and Justice page on Facebook. “I want to hear your story, how you are feeling in this current climate in our nation. We just want to love on you. Jesus told us to love our neighbors as we love ourselves.”

That message isn’t getting lost and is bringing people of different backgrounds together for a good cause. And largely because of that, the program appears to be working.

Surrounding the Phoenix Maryvale Corps were two hot zones—areas rife with drugs, prostitution, robbery and gun violence. But over the past two years, Hot Zones 1 and 2 have been downgraded, according to Cisneros.

Was it the work of groups such as The Salvation Army, which, as an example, led an effort to help the residents of a nearby filth-ridden, seedy condo complex clean up their locale? Has it been law enforcement cracking down on crime in the area? Was it the power of prayer?

One thing is for certain, people from all walks of life are working together to make their lives, and those around them, better.

“It’s going well,” said Police Community Affairs Specialist Nikki Wells. “It’s brand new, at the developing stage. Grassroots initiatives like this take time. But things have improved with the work that has already been done. As long as the city stays involved, I don’t see any reason why this can’t be a long-term initiative.”

Another important aspect of the Faith and Justice Program is building a strong relationship between residents of Phoenix and the police. In a time where that relationship is often cracked or even broken, it’s important to build trust, eliminate misconceptions on policing and establish a better understanding of law enforcement.

To that end, the Phoenix Police Department works in tandem with the local churches to provide support and visibility to Faith and Justice Program events. And the faith community reciprocates by aiding the police on a spiritual level.

When police officer David Glasser was shot and killed while responding to a 911 call in May 2016, The Salvation Army and other members of the Faith and Justice Program mobilized en masse to the site of the shooting to pray for the Glasser, his family, his fellow officers and the community, helping bring some calm to a tense situation.

Cisneros recounted another story, one with a much happier ending, about an officer who was caught in the middle of a shootout. Despite shots ringing all around, the officer came out of the harrowing experience unscathed, later telling Cisneros, “Thanks for praying for me and keeping me safe.”

“When we pray [for the police], it lifts them up,” Cisneros said. “It’s important to have those kind of testimonies.”