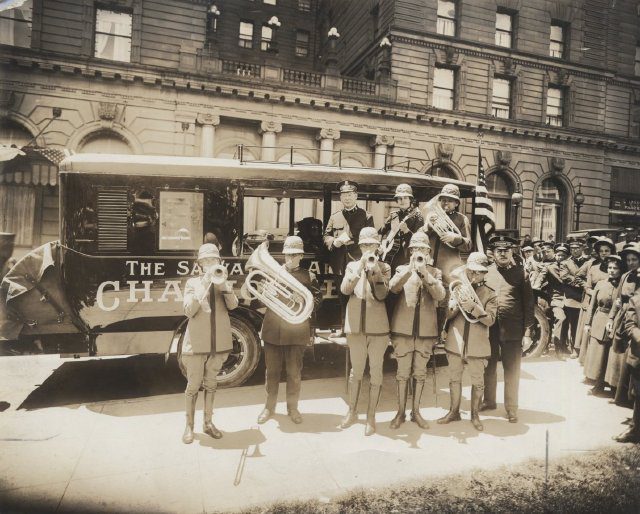 The Salvation Army expands into the Western United States.

In the early 1890s, a group of enterprising Salvationists acquired a used Wells Fargo stagecoach and turned it into a “War Chariot.” Equipped with the all-terrain vehicle of the time, the small band set out for the mining camps and towns of the Sierra Nevada. Many of the Charioteers were musicians who attracted large crowds by playing popular tunes sung with God-honoring lyrics. They took the church to the people who lived in areas too remote for most church denominations to reach. In the West, miners, more than factory workers, were the teeming masses needing to hear the good news that Jesus saves.

Moving into the 20th century, the West continued to grow rapidly. New industries and opportunities for a new life had always been the promise of the West, and the world flooded in to claim that promise.

Following World War I, The Salvation Army decided to revisit the tactics of the Charioteers. The horses and chariot gave way to a custom-built truck that could transport the new Charioteers from San Francisco, headquarters for The Salvation Army in the West, to the lumber camps of the Pacific Northwest and beyond.

Packed with everything the expedition would need, the truck carried tents, sleeping equipment, personal necessities and the Charioteers. In 1923, the Brigade of Charioteers was led by Adjutant Naton and comprised seven officers and one cadet, Flaherty, who was the assistant cook.

In the mornings, the Charioteers would rise at 6 a.m. for personal prayers before breakfast and Bible study. The typical day included camp duties, visitations to invite people to the evening meeting, band practice and open-air meeting followed by a salvation meeting beginning at 8 p.m. The group had lights out at 10:30 p.m. A wash day took place once a week, when all clothing and equipment were cleaned.

The War Cry of 1922 and 1923 published numerous accounts of the Charioteers going into distant communities and having altar calls where occasionally more than 100 souls were reportedly saved. Perhaps, in the current atmosphere, where people—isolated by COVID-19— are not able to make it to the corps building, Salvationists can take heart and inspiration from the Charioteers and their pioneering spirit.