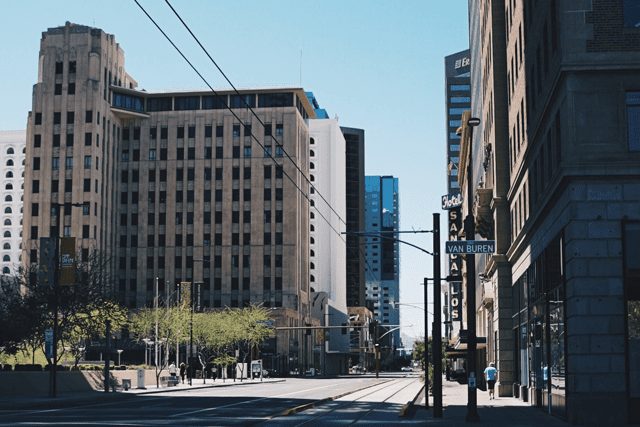 Walking down the streets of Phoenix eight months ago, Shannon Myles blended in like everyone else—a thirtysomething mom with two young daughters by her side. Little could anyone tell, not even her really, that she was one step away from becoming homeless.

In most cases, homelessness doesn’t look like a dirty, unshaven man pushing an overloaded shopping cart down an alley. It generally looks a lot like moms, dads, brothers and sisters. It can look like you.

“Never,” Myles said about ever thinking that she would one day be homeless. “I don’t think anybody ever does.”

But then the unthinkable happens.

Fortunately for the victims of homelessness and domestic violence in Phoenix, The Salvation Army has the Kaiser Family Homeless Shelter and the Elim House Domestic Violence Shelter to help those such as Myles get back on their feet and live stable, self-sufficient and fulfilling lives.

The Kaiser shelter provides temporary housing, food and care to approximately 500 homeless families with minor children each year. Families can regroup through several programs, including life skills, parenting, vocational rehabilitation and financial management classes for the adults and after-school mentoring activities for the children.

The Elim House is similar to the Kaiser shelter in terms of capacity and the tools and resources for those in need, but provides safe haven to women and men (with no children to care for) impacted by domestic violence, which often leads to homelessness.

“We try to help them build a better life for themselves and their kids,” said Anabelle Ramirez, who manages the Kaiser and Elim houses. “People are homeless for a reason. Our goal is to break the barriers that made them homeless.”

That could be as simple as the shelter staff helping someone get a driver’s license, write a resume to acquire a job with a living wage, or entangle some legal issues. Of course, it could take up to 120 days of counseling and rehab in the shelter program and another six months in the Pathway of Hope program to break the cycle that might include more serious problems such as substance abuse and mental illness.

“The system works,” said Major Barbara Sloan, Executive Director of Phoenix Family Services, a longtime Salvation Army officer and advocate for the homeless. “We can’t solve all of the world’s ills, but we help the ones we can.”

Myles and her 8-year-old and 5-year-old daughters are among the The Salvation Army’s success stories in Phoenix.

In January, her family was on the verge of becoming homeless after she fled the abusive father of her youngest daughter. The Salvation Army, upon gaining knowledge of her situation, reached out to Myles and brought her family to the Kaiser shelter.

She was somewhat hesitant. “I didn’t know what to expect,” Myles said —but it turned out to be a “blessing.”

“We had our own living space…I couldn’t have asked for better,” Myles said. “They have a game plan with what you need to do to get back on your feet.”

Some things she learned while there: “You get out what you put in,” Myles said, and “take advantage of what is given to you. Not everybody does.”

Almost 90 days later—after some counseling and vocational assistance—her family was out on its own again, living in affordable housing. Meanwhile, Myles, who maintained a part-time job during the whole ordeal, is working on becoming a phlebotomist and expects to be working full time in the medical field by October.

“It’s very exciting,” said Myles, who feels closer to her girls after the experience; she also has an adult-age son who lives in the area and helps her out when he can. “I’m excited to be working in the medical field. It’s what I’ve wanted to do since I was a little girl.”

Sloan calls family services “hard work,” but said it creates special feelings when it pays off.

“When someone comes up to me and says, ‘You don’t remember me, but..,’” she said, “those are heartwarming moments for me.”