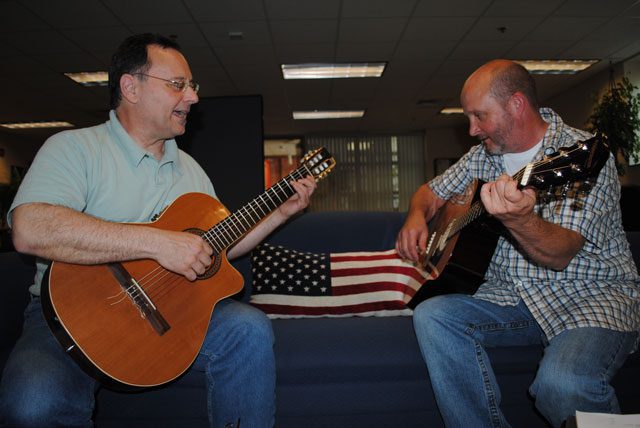 Musician Vinny Stefanelli wondered about his purpose in life, but it was not until 9/11—when a swarm of young soldiers enlisted in the U.S. military—that he found it.

“I’m not a veteran; I’ve been a musician all my life, but I had to do something. It was driving me crazy,” he said. “So I did the only thing I knew how to do, which was play and teach music. I decided to talk to the Veterans Administration (VA) and offer a program to teach vets how to play music with the purpose of providing a tool that they could use to find some peace and solitude.”

From this idea, the non-profit organization Music for Veterans was born in 2011 in Erie, Pa., to help veterans with psychological trauma cope through music. 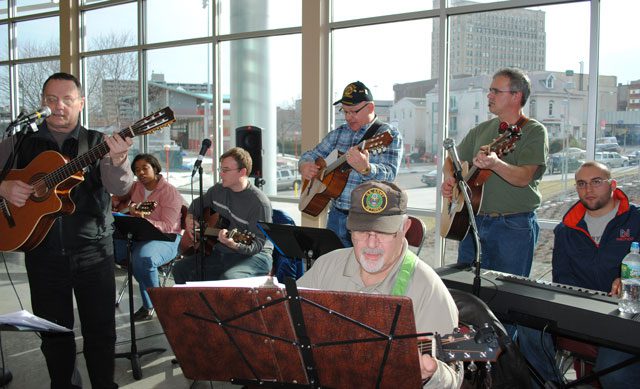 Stefanelli started reaching veterans through the VA, but was not getting results at first.

“Every time I was about to quit, someone would approach me thanking me for the program,” Stefanelli said. “Things like that that made me realize I couldn’t quit; I get so much back from seeing these veterans take to music and have this camaraderie.”

Music for Veterans began with guitar lessons, and expanded to other instruments as Stefanelli gathered donations of musical instruments.

“Some [vets] come back and they’re either going to college, getting their families back together or trying to find a job—they don’t have money to buy an instrument,” he said. “We knock on doors and ask people for instruments.”

As the program grew, Stefanelli needed more space to teach classes and contacted The Salvation Army Erie Temple’s Major Leslie Walter, a veteran, who agreed to offer classes at the corps.

“By learning to play music, it gives [veterans] direction, purpose, and something to work on in times when they are alone with their thoughts,” Walter said. “I think [this program] gives an avenue for them to concentrate on something other than bad memories.”

The corps also looks for instruments for the program and the local Adult Rehabilitation Center sets aside any instrument donations it receives. Walter plays guitar, and volunteered to teach the beginners class when needed.

Classes are set up by age group or war that the veterans participated in, adding an additional element of unity among participants. The Vietnam veterans meet at the VA center, while the younger group meets at the corps.

“For a lot of these vets, the people they best relate to are veterans,” Walter said. “Not only does being a veteran give you a common starting place, but loving music does that too.”

Stefanelli said he knows the program is working because of the success stories.

“I’ve seen young kids coming back who are in their mid-20s, and you can tell the pain is written in their faces of what they’ve gone through, and you can tell that the Vietnam veterans have carried the pain for decades,” he said. “They tell me now that they still wake up in the middle of the night, but when they do they grab an instrument…and play for five to 10 minutes. They’re able to forget, relax and go back to sleep.”

This was the case for John Chizmar, a Vietnam veteran.

“This is a program where you can take your negativity—maybe a night of nightmares or not being able to sleep for a couple of days—and funnel it toward something positive,” Chizmar said. “You get this anxiety building in you, and get the guitar and you play out the feeling that you have; instead of wasting it into the air, you can make a song.”

Chizmar hopes that this program will reach more young veterans that need help.

“We didn’t have this when we came back from Vietnam; we suffered,” he said. “We’ve got to reach out to these younger veterans to let them know that they’re missing out on a good opportunity for a better life.”

Laura Harper was diagnosed with post-traumatic stress disorder (PTSD) a year after returning home from service in Iraq and Afghanistan. While pursuing a degree in counseling, she sought to volunteer in the mental health field and found Music for Veterans in 2013.

“Vinny was not going to let me sit there and help him do things without playing [an instrument],” Harper said. “I was a bit reluctant, but it didn’t take long for [him] to turn me around—thank God for that.”

Pretty soon, Harper went from playing the hand drum to strumming chords and playing full songs on the guitar.

“Some nights I’d be playing, and it didn’t even matter if I knew the chords; it just felt comfortable to have that sort of relief,” Harper said. “It just gave me one more resource—one more thing that I could use in my battle against PTSD.”

She was especially excited when she learned a younger group would be meeting at The Salvation Army.

“I think I left the group [that night] and cried just because there was one gentleman in particular and we had both been in similar places,” Harper said. “It was pretty special that in the midst of him sort of helping me out with different chords or us sharing songs that we like…we could talk about the things that we did and stuff that we saw [while deployed].”

With proven impact among veterans, Stefanelli wanted to extend the program to others significantly impacted—military kids.

“[Many veterans] go away and come back, and they’re different. They’ve seen horrific things in the past month or year, and so they’re living with that,” Stefanelli said. “So the kids look at mom or dad thinking, ‘Why are they so sad? They should be happy to be with us.’ So it affects the whole family.”

Cyndi Treiber, mother of R.J. and Abbie, immediately enrolled her children when the class began.

“Military kids deal with different stressors than regular kids, and I knew that they needed to expand their coping skills and needed something to do to together,” Treiber said. “[The program] is just all-around really helping them as people.”

Now that Stefanelli has a program that is working and thriving for veterans and their families in Pennsylvania, he would like to expand it throughout the country.