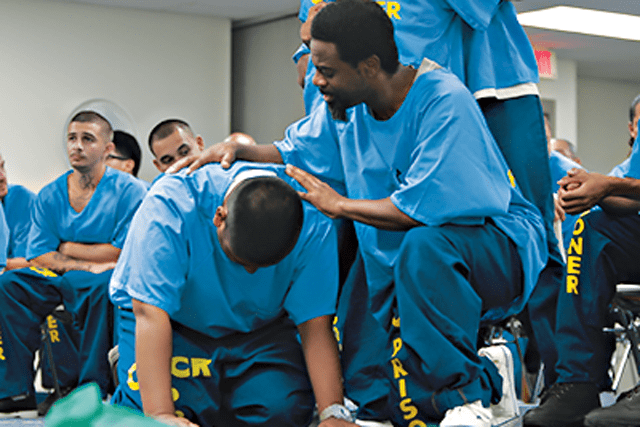 Onward to the ‘City of Champions’

Would a group of “hardened” prisoners open up to the creative process, becoming vulnerable and sharing their feelings?

A group of men incarcerated at the California Rehabilitation Center in Norco experienced prison in a new way when the TCAE led them in a late September weekend workshop. In fact, by Saturday night, many of them were able to envision a victorious future with Jesus in charge of their lives.

Team members’ own reactions were a surprise as they got to know the men.

“Without trying very hard, you will realize that these men are someone’s brother, father, son, nephew or cousin,” Luong said. “Not many ‘outsiders’ often afford them that liberty when speaking about the prison demographic.”

The TCAE team participated with the inmates as they told their stories—past, present and future—through drama, movement and creative writing. In a dramatic final victory scene, men boarded a bus bound for the “City of Champions,” steered by TCAE member Lt. Colonel Tim Foley portraying Jesus.

“I am always astonished at how the arts can create bridges between different communities and populations,” Fagerstrom said. “Throughout the weekend, there was never a division of ‘them’ and an ‘us’—it was always just ‘we,’ and I think that was the most beautiful aspect of the weekend for me.” An inmate reads the letter he wrote to his future self while fellow inmates dramatize it through creative movement.

“God is constantly working on us and he can change even the hardest of hearts given a chance,” TCAE member Arrianna Tate said. “I saw God really working in the prison and I felt him working in me. There’s something freeing about working with like-minded people no matter who you’re with or where you go.”

Some TCAE members took part in a similar one-day ministry at the prison in April that likewise allowed the men to tell their stories through the arts. Word spread about the ministry—it was both fun and powerful—and about twice as many men showed up for the recent two-day experience.

The additional time allowed for more detail and depth in the creative process. In addition, a media team from Western Territorial Headquarters accompanied the TCAE, filming highlights from the weekend and interviews with inmates and TCAE members. They will create several videos to be used throughout the territory—and possibly beyond—in Salvation Army ministry.

“We hope that the filmed material will demonstrate the power of the arts to bring people together, to allow for creative expression, to heal and empower, and ultimately to bring people to Jesus,” Fagerstrom said. “We hope to convey that the arts can be used in similar ways throughout the Salvation Army’s Western Territory, stirring and liberating the souls of congregation members, [Adult Rehabilitation Center] adherents, and social service beneficiaries alike.”

The film crew also videoed the inmates and TCAE as they sang “Soon and Very Soon,” “O Freedom” and “Amazing Grace,” with the men adding their own additional lyrics to the first two songs.

The weekend concluded with a Saturday night performance to a full house.

“The defining point for me was when one of the inmates grabbed my hand as he was about to exit the room when we had concluded our final program,” Foley said. “With tears in his eyes, he said, ‘Tim, thank you for allowing me to forget I was in a prison these past two days.’ For me as an artist it was a sign of true success. Imagination took hold and hope had its way in our efforts.”

Ultimately, the TCAE is not just about performing; it is first and foremost an outreach ministry group.

“The Territorial Creative Arts Ensemble is about bringing the love of Jesus Christ through the Arts to people who are hurting,” TCAE member Hannah Bridgeo said. “Our weekend at the Norco Men’s Prison accomplished just that…We all have an innate desire to be loved and cared for and the ministry God provided through the TCAE allowed these men to finally connect with one another as brothers in the kingdom of God.”