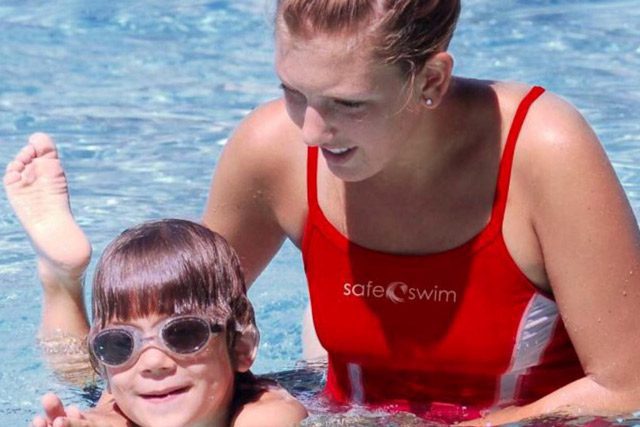 Nearly 120 kids learned to swim this summer at the Red Shield.

Marge Derby vividly recalls why the pool was built 50 years ago at what is now the Modesto (California) Red Shield.

“The sheriff in the area was very concerned because there were drownings there because of a canal, which still exists, and the river, which still exists,” said Derby, a former Salvation Army Advisory Board Member. “He felt the kids needed a safe place to go.”

During a visit to the Red Shield at the end of the past school year, Derby observed a group of middle schoolers on a field trip at the center’s pool. After the students had completed their swim assessments with the lifeguards, she noticed most of them had wristbands with a color denoting they did not know how to swim.

“There was a great number of them with nonswimmer tags and they were sixth graders. I watched them for a while and got in the car and started home,” Derby said. “I thought to myself…50 years ago, this pool was built in order to keep children from drowning, and I’m going to this pool and I’m looking at all these nonswimmers. Well, the canal still exists. The river is still there, and why, if we have a pool, do we have nonswimmers?’”

Derby asked the question and was told parents, especially those with multiple children, could not afford the $35 fee for a two-week session of swim lessons that covers the cost of being taught by a lifeguard. In fact, last year, the center only had 30 swimming lesson students.

“Most parents couldn’t afford it,” said Maria Arellano, Modesto Red Shield business manager. “Even though it doesn’t sound like a lot of money, in the neighborhood that we serve, it really is.”

“It’s been the easiest fundraiser I’ve ever done,” Derby said. “I still can’t believe it.”

With the funds, starting in May, the Red Shield offered families 30-minute swimming lessons at $5 per two-week session for the first child and $1 for each additional child.

“It was really affordable for the families,” Arellano said. “So, when we put it out there people just took it like crazy. Our whole summer filled out very quickly with swimming lessons.”

The success of the class is evident, not only in sign-ups, but in the growth of the kids as swimmers.

“We’ve had some really good results of kids who were absolutely afraid of the water, and now actually are not afraid to jump in the 9-foot deep side and swim,” Arellano said.

Even parents are joining in and learning to swim alongside their kids, she said, as they can now afford the reduced rate of their children’s lessons.

“It benefits a lot of the families. Where we live in the community, there’s only a couple of options for swimming. We have the canal…and local lakes,” Arellano said. “This summer, just about every other week there’s been drownings at these local lakes and reservoirs. So, for our community to be able to have access to this beautiful pool and to learn to swim correctly with certified lifeguards I think is a benefit and a win-win for everybody.”

The reduced fee applies to each session as the students progress between class levels.

“The goal was to make sure that they don’t take just one set of lessons, but they take enough lessons that they become strong enough to be good swimmers,” Arellano said.

And while the swim season ends at the end of September, donations have already been secured by another Red Shield Advisory Board member to be able to offer the same reduced-fee swimming lessons next year, too.

“It was just a very positive program,” Arellano said. “We’re very grateful to our advisory board members who made this happen. It was unexpected, and it was a hit this year…We hope that they become confident swimmers and are not afraid of the water anymore.”