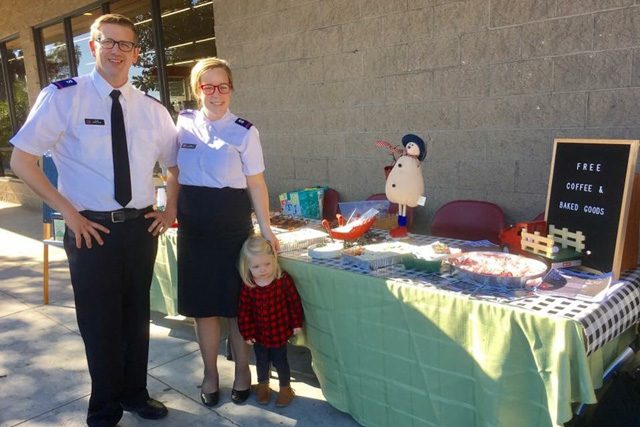 It all felt very awkward at first.

It was the second night of our College for Officer Training Christmas assignment to the San Fernando Valley (California) Corps and we were participating in valley miSsionAl communities’—a new ministry expression of The Salvation Army—first book club meeting at the Canoga Park Thrift Store.

I was excited about this idea and opportunity, but here we were, circling chairs in the middle of a thrift store, armed with used copies of our chosen book, “The Purpose Driven Life,” and some light refreshments, while people shopped around us. Some even stepped into our circle just to look at the price of the chairs.

At the last possible minute, we were joined by one thrift store volunteer, and began the study. The conversation was Spirit-led, and as we progressed through the first section of the book, one woman kept walking by our circle. Once. Twice. Three times. Eventually, she sat down about six feet away, intent on listening, but not committed to the group. We all noticed her.

With just ten minutes left before the store closed and our study ended, the woman came and sat down within our circle. She introduced herself as Barbara, and told us that she had been in an argument with her husband that evening, and came to the thrift store to get out and cool down a bit. She divulged more and more of her story, about her faith in the Lord, her children and her current life situation. She said that as she was shopping, she heard our conversation and it was like God was speaking directly to her. It was everything she needed to hear. We were able to pray for Barbara that night, and throughout our assignment.

Barbara was just one person, on one night, but like we read in Luke 15:4 (MSG), “Suppose one of you had a hundred sheep and lost one. Wouldn’t you leave the ninety-nine in the wilderness and go after the lost one until you found it?”

Cadets Aaron and Meagan Ruff are in their second year at the College for Officer Training at Crestmont.