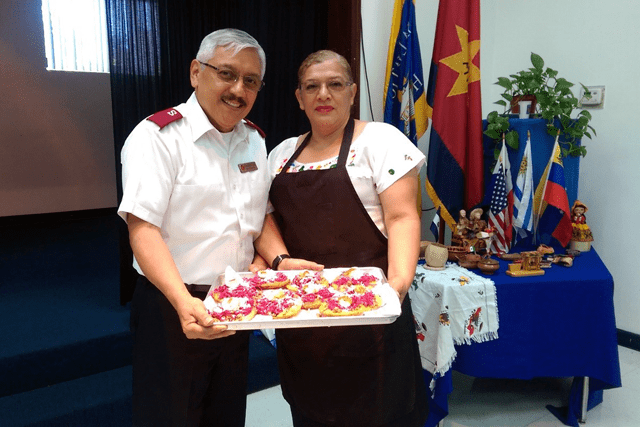 One culture in Christ

The kingdom of God welcomes all people.

While The Salvation Army honors multiculturalism throughout the year, it holds a special time of celebration in January, Cultural Awareness Week (CAW), when corps take time to acknowledge their diversity, often sharing ethnic food and traditional attire.
“We are blessed to be a diverse Army with many different cultural populations, while remaining ‘One Army,’ with one mission and one purpose,” said USA Western Territorial Multi-Cultural Ministries Secretary Major Linda Manhardt. “Here are some of the ways that we beautifully celebrated the multi-cultural ministries, which give flavor and reach out with the love of God in our communities.”
The Boise (Idaho) Corps, led by Majors Robert and Rhonda Lloyd, discovered two additional languages spoken in their congregation: French and Romanian. One of the French speakers recited the Lord’s Prayer in her native language during the worship service.
Territorial Headquarters held its annual multicultural chapel, this year featuring the senior dance group from the Sally’s House Ministry at the Los Angeles Central Corps, who performed India-inspired dance numbers in traditional costumes.
On Cultural Awareness Sunday, Coos Bay (Oregon) corps members described their cultures, which included Tongan, Indian, Native American, Russian, African American and American. The scripture reading, from 1 Peter 2:4-12, emphasized that Christians become a “new culture” in Christ. Envoys Dennis and Tawnya Stumpf are in-charge of the corps.
The Whittier (Calif.) Corps, led by Lts. Ryan and Jennifer Bearchell, celebrated with Indian dancing, testimonies and a Laotian prayer. At the Apache Junction (Ariz.) Corps, the congregation studied a map of the international Salvation Army and discussed Army symbols from different parts of the world. Majors Kris and Terry Suarez are the Corps Officers in Apache Junction.
The Santa Ana (Calif.) Temple Corps, led by Lt. Colonels Zoilo and Magali Pardo, used materials provided by the the Western Territorial Multicultural Ministries department during CAW.
“We had beautiful success during the week,” said Zoilo Pardo, who is also Southern California Divisional Secretary for Latino Ministries. The Bible study materials “did not only increase our cultural awareness as to sharing the gospel within the church, but also prepared us to proclaim the gospel in our city of Santa Ana and the surrounding area,” he said.
The Santa Ana Corps’ Cultural Awareness Sunday meeting—with 234 people attending—focused on the cultures and home countries of its members: Mexico, Guatemala, El Salvador, Bolivia, Honduras and the second generation—those born in the U.S. Soldiers brought native dishes and shared their country’s clothing, history, poetry, songs and flags.
“The abundance surprised everyone,” Pardo said. “[There arose] the recognition that each country in culture has much to contribute not only to the church, but also to the United States… The Santa Ana Corps is a challenge for the people that congregate.”
In addition to celebrating members’ cultural heritages, the service included a segment on being willing to work with other ethnic groups to share the love of God. Scripture references from Matthew 28:19 and Acts 1:8 challenged members to reach out to others without cultural boundaries, knowing that God can dissolve barriers and bring all people together in his kingdom.
Noting that no cultural group is above another, Pardo also commented on the full meaning of “intercultural.”
“In intercultural relations a relationship based on respect for diversity and mutual enrichment is established; however, it is not a conflict-free process,” he said. “Conflicts are resolved through respect, dialogue and mutual listening. It is important to clarify that intercultural deals with both the interaction between a Chinese and a Bolivian and between a man and a woman, a child and an elder, the rich and the poor, a Marxist and a Liberal, and so on.”
Other Western Territory corps that observed CAW include Roseburg (Ore.), Hollister (Calif.), Los Angeles Central and East Los Angeles.