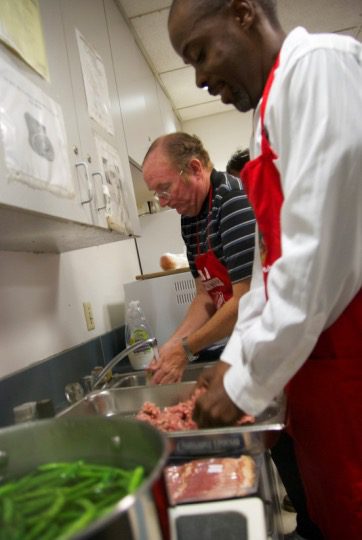 Volunteer Linda Stump has been leading a popular cooking class she designed for San Diego’s STEPS program since 2013.

This month, STEPS starts up another round of the popular series that’s been running since 2013. It’s the brainchild of Linda Stump, the owner of local Stump’s Family Marketplace, who has always looked for creative ways to be an active member of her community.

“I’m a hands-on person, not a tea party person. I want to be there and do it and see what happens,” she said of her approach to volunteering.

Just such an opportunity came knocking when Stump received an email from The Salvation Army calling for volunteers. Without hesitation, she clicked through and immediately set up a meeting with the volunteer coordinator.

“I didn’t know anything about The Salvation Army at the time, I just saw that they needed help, and I was looking to help,” she said.

Together, they devised a new, tailored educational initiative from scratch.

“We put together a program for the men at STEPS to come once a week to class to learn something about shopping, cooking or nutrition,” she said. It was a soup-to-nuts approach, even mapping out which stores to frequent, and how to “power shop,” or ferret out the best deals.

Creating the curriculum poised unique challenges, as many of the men in the STEPS program didn’t know the first thing about cooking, or even own basic cookware. With Stump’s extensive nutrition background, she created creative and simple recipes to teach.

“We started with techniques anybody could master. In fact, I tested it on my grandchildren, and if they could do it, I knew the guys could do it,” she said. “We taught them how to make scrambled eggs in a ziplock bag and boiling water. They have to have ways to prepare their food, because they come with nothing. We start from the bottom up.”

Soon, the class became so successful that attendance became mandatory for the men in the STEPS program whose work schedules didn’t conflict with the class.

To add some extra spice, Stump and her volunteers decided to begin ending each series with a competition, styled after the Food Network’s hit show “Chopped.” Just like on TV, the men are placed in two teams and given a basket of food items to prepare a three-course meal, using the cooking skills they learned in the class. The meal is then scored by Stump and the other program volunteers. Winners take home bragging rights, plus a small kitchen appliance for one randomly selected participant.

After successfully completing the course, Mark S. (left) and Steven G. (right) join their teammates in the final competition. The cooking class has worked so well, it’s become a mandatory part of the STEPS program. | Photo by Sophie Davey

“Linda has really been the key ingredient to making this class possible,” said Stacy Dertien, divisional volunteer coordinator. “She has such a passion and enthusiasm for teaching the men about nutrition and really wanted them to succeed.”

Over time, Stump’s commitment has only grown. She began teaching a Bible study before cooking class and has been excited to witness the impact the course has had on the men.

In fact, Stump said she’s been so impressed by how hard the men in the STEPS program are willing to work to get ahead in life, that over the years, she’s hired four of them to work at her family’s grocery store.

“The best part of this cooking program is the community that it reveals to one another as they share the food,” she said. “We always pray together and always sit down and eat together. And then we talk.”

Ultimately, the food is only part of the draw. “It’s not only that we have volunteers come and help us cook and that’s it, they actually take the time to find out what our background and stories are that got us to this point,” said Edwin, a STEPS client. “And to be able to enjoy food with them? They make you feel normal, feel wanted, feel accepted. Even though it’s a very challenging time in your life.”