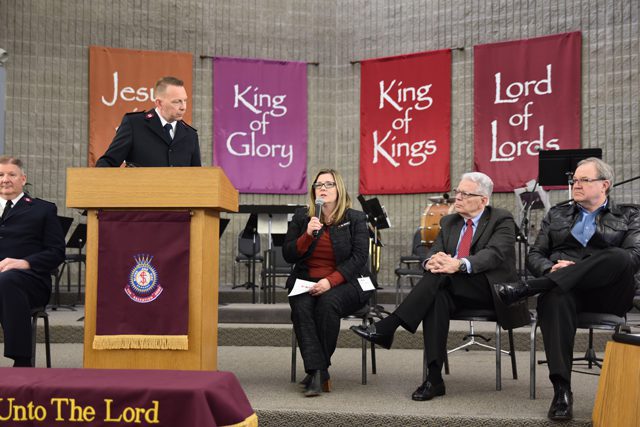 Salvation Army advisory board and council members from throughout the Northwest Division spent a day sharing and networking this spring at “IMPACT 2019,” the Divisional Advisory Organizations Conference, aimed to educate, inspire and energize advisory groups in the Northwest. It also served as a preliminary event to the 2020 National Advisory Organizations Conference.

Due to the vast expanse of the Northwest’s geography, the conference was held in both Seattle and Spokane—one day in each location—to accommodate advisory members from the west and east side of Washington, respectively. A third day slated for Missoula, Montana, for advisory members in Idaho and Montana, was cancelled due to inclement weather. “Our advisory board and council members are such an important part of the Army’s mission,” Northwest Divisional Commander Lt. Colonel Bill Dickinson said. “We wanted to give them an educational experience that would equip them in meeting the challenges of today, and prepare them for challenges in the future.”

Commissioner Paul Seiler assisted the Northwest staff in coordination of the conference. Seiler, a Western officer, retired in 2017 as Territorial Commander of the USA Central Territory. “We built the curriculum with tangible results in mind,” Seiler said. “We needed meaningful days with corps officers and advisory group members returning home with new knowledge and ideas to put into practice—a real desire to help the Army be more effective in serving the needs of the community.”

Conference attendance was strong, with 45 attendees in Spokane and 110 in Seattle. In each city, participants selected a workshop track, attending a three-part series throughout the day. This format allowed for a more in-depth study of the topics including board/council recruitment, fundraising, board/council engagement, long-range planning, and growing women’s auxiliary membership. At the workshop conclusion, participants completed a detailed goal-setting sheet to take back to their corps/unit for follow up. The conference began with devotions, a welcome message from Bill Dickinson and an opening speech from Flinn. As the recently retired Executive Director of the Tournament of Roses Association and current member of The Salvation Army National Advisory Board, Flinn shared insights on volunteer recruitment and engagement, and connecting with different generations. A main goal of the conference was to encourage advisory members, officers and staff to establish goals.

“We had hoped in our planning that those who attended would return home with specific goals to accomplish,” Seiler said. “How exciting after the conference to read written goals such as ‘recruit more board members,’ ‘raise $5,000 more,’ orient new members better,’ and ‘write a five-year strategic plan.’”

In the coming months, divisional leadership and staff will follow up with local corps to make the goals a reality.

The Northwest Division is planning another Divisional Advisory Organizations Conference for 2021.