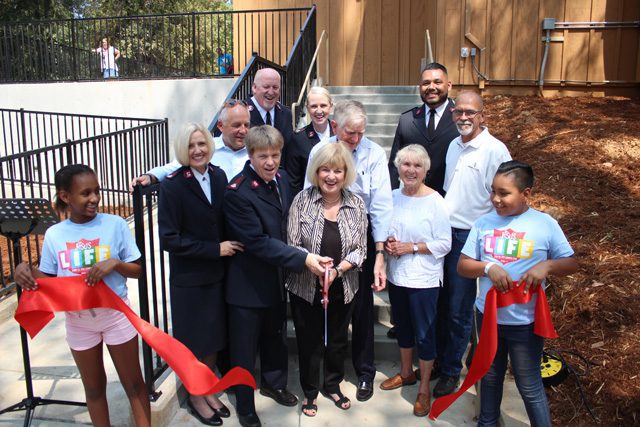 The Stephen S. Ball Conference Center is a large multipurpose room that doubles as a gymnasium and contains three lodges with 13 rooms in each building.

The conference center can host businesses, churches and school groups from August through May for retreats, meetings and team-building experiences. Currently, the conference center’s weekend dates are already booked through November.

“The conference center is important, and a new chapter to our Camp Del Oro experience,” said Major Ivan Wild, Del Oro Divisional Commander. “With groups renting the buildings, our biggest hope is that we can offset the expenses for families to send their children to our summer camp.”

The funding for the new facilities was made possible by the estate of Stephen S. Ball. Several members of the Ball family were in attendance during the center’s official ribbon-cutting ceremony on Aug. 25.

“Stephen would love this because he loved the outdoors and he loved kids,” said Susan Ball Syar, sister of the late Stephen S. Ball. “He wanted to support The Salvation Army because they helped his friend. They supported her during a rehab program, finding work and giving her a reason to get up every morning.  Stephen was impressed with that.”

This past summer, a total of 950 children attended summer camp at Camp Del Oro.  And since 2005, the campsite has served nearly 12,000 campers.

“Camp is about creating lasting memories,” Wild said. “We know the Stephen S. Ball Conference Center will be key for more youth to experience camp for years to come.”

For additional information about the Stephen S. Ball Conference Center, go to campdeloro.org