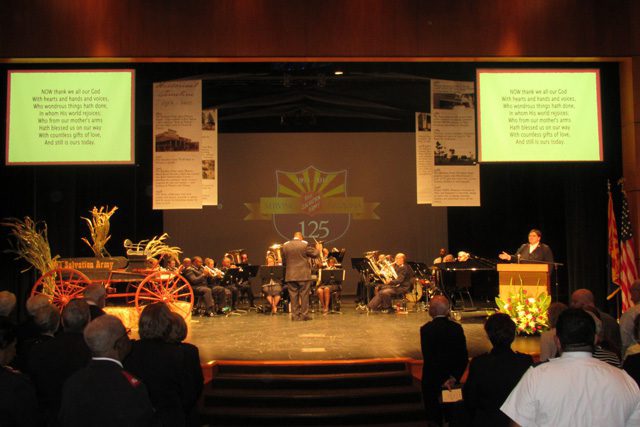 Commissioners David and Sharron Hudson, National Commander and National President of Women’s Ministries, respectively, were on hand to lead the celebration.

Musicians young and old played as hundreds of guests filed into the Kroc Center, and Sharron Hudson officially kicked off the festivities with a stirring rendition of “Banners and Bonnets.”

The crowd was regaled with more song, music and a look back at the Army’s first 125 years in Arizona before Captain Raymond Dihle, Southwest Divisional Men’s Ministry Director, led the offering.

The day’s offering, Dihle said, would be directed to the Jaluit Corps Community Center. Located in the Jaluit Republic, in the Marshall Islands, between Hawaii and Australia, it is a corps with limited resources.

David Hudson recalled moving to Phoenix three decades ago and serving in the Southwest Division for nine years. He marveled at the Army’s 125 years of serving Arizonans in need and dubbed it, “a good start.”

Hudson asked the audience why The Salvation Army is successful. The answer is simple, he said. It’s the mission. It’s a mission we can stand behind and one worth rallying behind.

He spoke of the United States as a nation that is polarized, a nation in need of hope, and he called upon The Salvation Army to be the light of the world and continue to be vessels of grace.

“We need to speak with unity, with clarity and make sure the mission is always culturally relevant,” Hudson said. “We need to stand in the gap for those who can’t stand for themselves.”

Hudson said the groundwork for The Salvation Army’s mission in Arizona was laid by those who came before us and declared: “The next 125 years depends on the work you do.” He closed with a challenge for all to leave a legacy for generations to come.