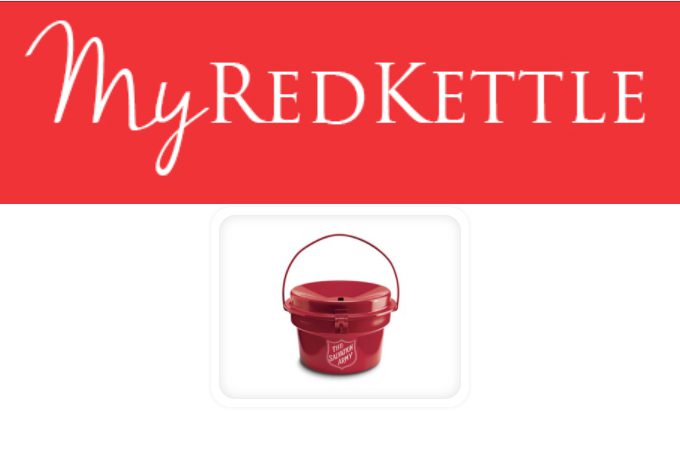 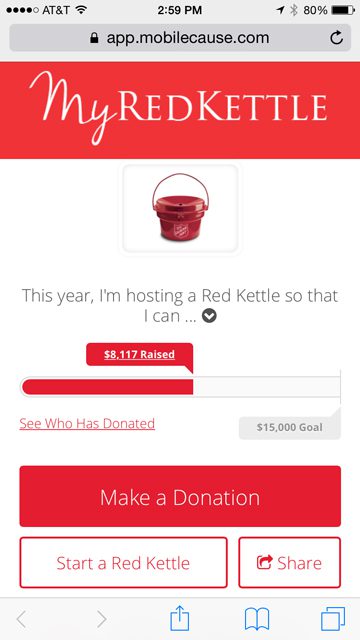 Text “quick” to 71777 to see a sample Mobile Red Kettle campaign, “Give Christmas Away.” The new platform is available this holiday season in addition to the Online Red Kettle.

The Southwest Division is testing a peer-to-peer fundraising campaign this month to raise $10,000 to feed local families through an average $10 gift from 1,000 people.

The test is part of a national shift in fundraising that banks on the recommendations of friends or family, and leads donors to give immediate, small amounts.

“Today’s donors want those tangible accomplishments—for us to say, ‘When we meet X dollars we feed X families,’” said Cheri Comer, the Southwest’s development web and social media specialist. “We’re going to target that Gen X demographic, for example via high school Key Clubs and Red Kettle Clubs, that will give $10 on their phone, and hoping that once they’ve had a chance to get their buy in that we’re then able to communicate with their parents and their families in a different way—to build a family to family connection.”

The goal is for every $10 donation to provide 30 meals, Comer said, and with $10,000 The Salvation Army in the Southwest can serve 7,500 families in need. “We’re focusing on food because our pantries have hovered at emergency thresholds for too long, and the purchase of food takes funding away from rental assistance for families,” she said.

In her community of Las Vegas—one of three target cities for the campaign including Phoenix and Albuquerque, N.M.—15 percent of the county’s population (roughly 300,000 people) are food insecure, according to Feeding America.

The October test will help The Salvation Army prepare for a new Mobile Red Kettle that will be available this holiday season in addition to the Online Red Kettle, which last year raised $2.4 million nationally (up from $2.1 million in 2012). Overall, the 2014 Red Kettle Campaign raised $135.9 million through the support of donors and corporate partners.

The added approach is one outcome of ongoing work to strategize marketing tactics with a team of 16 digital specialists across the Western Territory, including Comer, led by Director of Digital Strategy Angela McIntosh.

“What we found is that we have really talented staff across the West, but they didn’t have all the tools they needed to be successful so we immediately got them new tools—a new email platform and mobile fundraising platform—and we built channels for them to share information and results,” McIntosh said. “It turns out that 40 percent of our website traffic is mobile and 50 percent of our traffic is from 25-44 year olds. But our donation tools weren’t aimed at this huge online audience or optimized for mobile. So we made a big shift to make Mobile Red Kettle our primary tool for peer-to-peer fundraising this Christmas.”

Social fundraising is up 32 percent since 2012, according to the DonorDrive 2015 State of Peer-To-Peer Fundraising Report. Further, two-thirds of mobile donations that come through social media are from smartphones.

“Donors and supporters are more hands-on than ever,” McIntosh said. “Millennials give as a part of who they are not as an act of sacrifice. This is a big psychological shift in the generations. This generation can start a campaign for hospital bills or start their company through funding on Kickstarter. But they won’t do anything quietly. It’s a sharing economy—these guys don’t just want to give. They want their own page where they can have their picture next to the good they are doing. It matters for them to publish the idea of doing good.”

And it’s that component, of being part of people’s identity, that The Salvation Army often seems to miss, Comer said. “This new generation of donor needs to have a gift be a part of who they are, whether it is making it part of their social media profile or in how they talk to their friends,” she said. “And we want to be a part of it.”

Unlike the Online Red Kettle, the Mobile Red Kettle (powered by MobileCause) uses responsive design, meaning that the pages automatically adjust to the user’s device. For millennials, this means a clean and simple experience, for boomers it means the text gets bigger and easier to read in all the right places. As a bonus, it takes an administrator (divisional staff) 15 minutes to set up, an individual fundraiser three minutes to set up, and a donor just 90 seconds to give.

“We’re encouraging people to choose an angle so that people know exactly what they are giving to and what their individual donation is going to do,” McIntosh said. “At the end of the season, we hope to look at 60 to 70 campaigns and see what did well—that the experiment will provide innovation capital for us and we can replicate whatever succeeds next year.”

A sample campaign, “Give Christmas Away,” is currently accessible by texting “quick” to 71777, and a demo is viewable on YouTube.

But first, the Southwest Division is stocking its shelves.

“We plan to hit or exceed our goal and to convey that because we could stock pantries so they are not at emergency thresholds, we can now look at sustainability,” Comer said. “Perhaps that is family budgeting classes, or workshops on how to purchase the right foods to make it last longer for your family. This campaign can literally help people between feast and famine.”