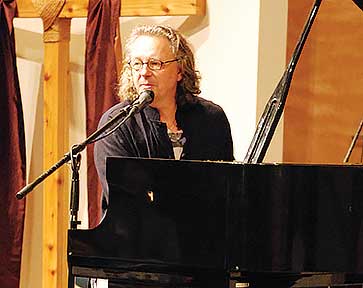 The corps holds a benefit concert for the youth music programs.

The Salvation Army of Gresham, Ore., welcomed pianist Michael Allen Harrison for the second time this year for a benefit concert that raised $13,334 to support the corps’ youth and music programs.

Harrison, who has performed a concert for the corps and its youth and music programs for several years, also accompanied and directed the corps’ Music Academy Youth Choir and Junior Worship Team.

“Michael was his usual humorous, incredibly talented self, and the children in the music academy once again were an inspiration,” said Gresham Corps Officer Major James Sullivan.

The event included auctions of a private concert opportunity with Harrison and a guitar autographed by all the original band members of The Rolling Stones. An impromptu private concert with Rowden was also auctioned off, with those funds going toward a scholarship in Rowden’s name.

“Although our crowd was a bit sparser than usual, they were very generous,” Sullivan said. “I want to thank everyone for their support in making [the concert] happen again.”