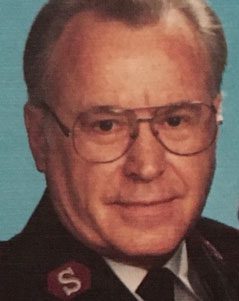 LeCappelain was born Jan. 29, 1929, in North Bay, Ontario, Canada, to Edith (Saunders) and Samuel LeCappelain. He entered The Salvation Army Training College in Toronto with the Standard Bearers Session of 1949-50. His ministry in The Salvation Army included appointments in both Canada and the United States—Eastern and Western territories—working in corps ministry, finance administration and adult rehabilitation.

Memorial gifts can be designated “The Weekenders” and sent to The Salvation Army of Canton, Ohio. In conjunction with the local food bank and two local schools, The Salvation Army provides hungry children with weekend meals and snacks. LeCappelain’s experience with food insecurity during the Great Depression made him sensitive to the food needs of young children.  He had a special place in his heart for the children of the Canton Corps.