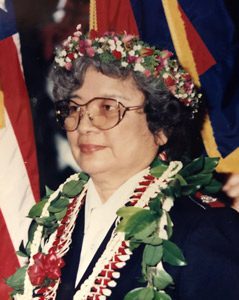 Lt. Colonel Grace Cline, 88, was promoted to Glory Nov. 1, 2019, from Carmel, California, where she lived with her daughter, Eiko Cusick.

Grace Junko Taba was born Feb. 15, 1931, to James and Tsuru Taba in Honolulu, where she grew up and attended school. She married William Phillips in 1956 and they were commissioned as Salvation Army officers in 1957 with the Faithful Session of cadets. They served in several corps appointments in Hawaii, including Lahaina, Koloa, Liliha and Aiea, and as corps officers in Chico and Eureka, California.

Grace continued to live in Hawaii and remained active as a soldier and pianist at the Japanese Corps and Kauluwela Mission Corps until she moved to Carmel to be closer to her daughter.  She was a faithful member of the Honolulu Women’s Auxiliary, working on such projects as the Fashion Show/Trinkets and Treasures to raise money for Honolulu social service programs, the community Thanksgiving dinner and the annual membership tea.

Throughout her life, Grace used her God-given musical gifts and her organizational and public speaking abilities to honor and glorify the Lord.

A celebration of life service took place Jan. 19 at Nuuanu Memorial Park and Mortuary in Honolulu. In lieu of flowers, donations may be made to The Salvation Army, 2950 Manoa Road, Honolulu, HI 96822.