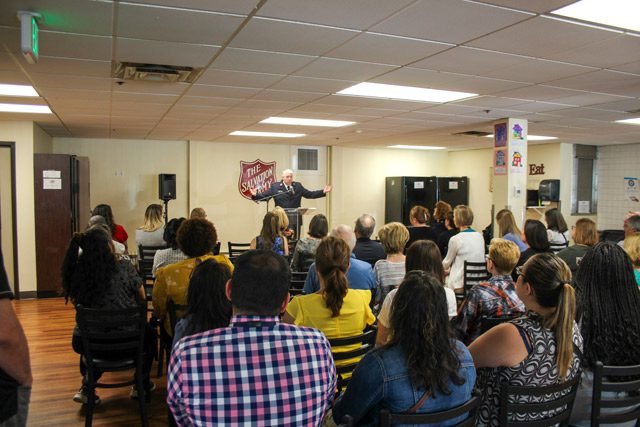 In the first half of 2019, the center helped 33 Denver families into stable or permanent housing.

Following more than three decades of helping families experiencing homelessness, the Lambuth Family Center recently renovated its 20 rooms and restructured its program in hopes of helping even more families find a place to call home.

The center reopened in January 2019 as a 90-day low-barrier emergency shelter for people with a child age 18 or under in school.

“Our goal is to serve as many people as we can and not to screen people out,” said Kristen Baluyot, Divisional Family Programs Director. Lambuth staff helps a child make a paper airplane in an after-school program.

Previously, the center was a transitional housing program where families could stay for up to two years. That extended period, rather than helping some people, Baluyot said, was holding them back.

“People were complacent and hunkered down, and Lambuth became their home instead of a stopping point to their home,” she said.

And because it was called a transitional housing facility, guests weren’t considered homeless, making them ineligible for some housing opportunities. Additionally, the center’s rules and screenings blocked many people in need. Under the new program, the large handbook was pared down to a framework of expectations geared around safety and respecting others. For example, while Lambuth performs a background check on guests, there’s no longer a blanket “no felons” policy. Instead, the center decides on a case-by-case basis, looking at the nature of the crime and when it happened. The Education Room at the Lambuth Family Center, painted by Denver Echelon volunteers, offers a place for children to play and enjoy programs after school.

And now, rather than trying to find people on the waiting list, “if there’s an opening and they call that day, they could have a place to stay that night,” Baluyot said. “Our goal is to serve people who are literally homeless or have no safe place to be.”

The Salvation Army’s Community Connection Center takes about 1,700 calls a month, not just for Lambuth but also providing referrals and connections to assistance to the broader community. If there’s room at Lambuth, families get a room with bunk beds, a private bathroom and three meals a day. A mother and daughter share a room at Lambuth Family Center.

Once there, guests sit down with a case manager who takes a housing-first approach.

“We want folks to be in stable housing as quickly as possible, so we talk about what that plan looks like and how we do it together,” Baluyot said. “We’re focused on the exit out of Lambuth because we recognize that institutions and shelters aren’t the best places for families—being in a home is better.”

Four families have recently found permanent housing, in partnership with the Metro Denver Homeless Initiative, which offers subsidies to help with first and last month’s rent and deposits as part of its rapid rehousing services.

Using The Salvation Army’s Pathway of Hope, guests set their own goals with their case manager instead of vice versa.

“We ask ‘what do you need to move your family forward from homelessness to self-sufficiency?’” said Major Richard Pease, Intermountain Divisional Secretary for Business and Metro Denver Coordinator. “Once they get housing solved, they can work on other issues that may have contributed to them being homeless. The majority of the folks we see come through Lambuth are folks who have had something traumatic happen in life. They lost a job, had a medical emergency or something else—and things just fell apart.”

Families have access to age-appropriate classes and activities, including reading groups for teens to family cooking classes, parenting courses and field trips to a local fair or a community gardening facility. Multiple families now attend the nearby West Adams Corps for worship. While class participation was mandatory under the previous program structure, classes are now optional—and much better attended, Baluyot said. Clients post achievements on a mural in the dining hall of Lambuth Family Center.

The results are adding up, as Lambuth served 53 households from January to July, with 36 of those families having left the program or being discharged—33 into stable or permanent housing.

“Ninety-one percent of households have exited into positive placement,” Baluyot said. “In 2018, only 45 percent exited into stable housing, and in 2016, it was 60 percent. We’ve seen some real positive changes as far as our exit rates, and I expect them to increase.”

Even after a family leaves Lambuth, the support continues. An after-care program begins two weeks post-departure and continues for up to six months to ensure families stay housed or to increase services, if needed.

“We want to make sure families not only find housing but that they’re able to keep it,” Baluyot said. “We’re here to help support them as they get their feet under them.” 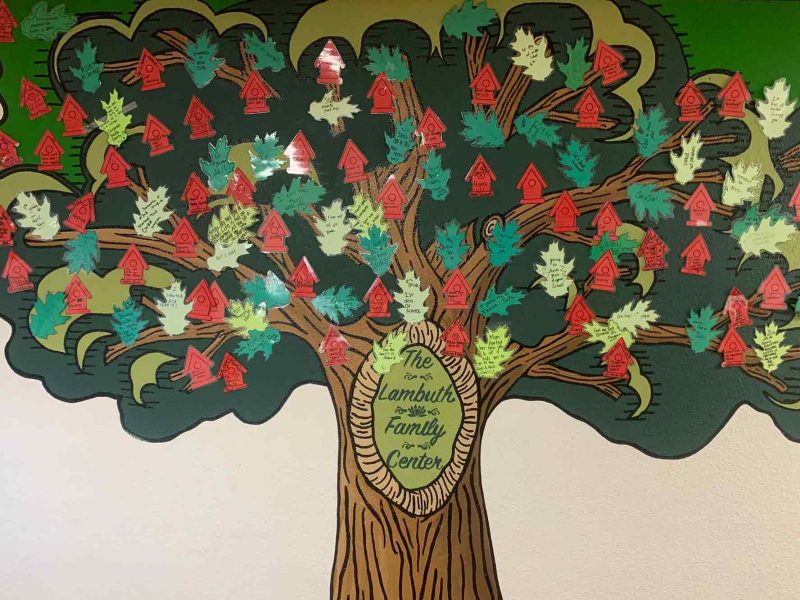