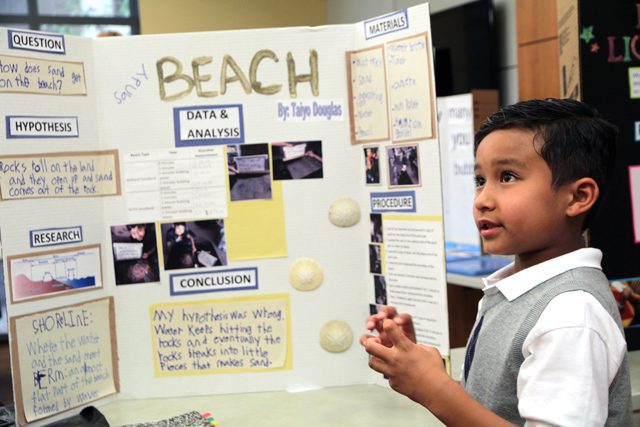 Kids show off their displays at science fair.

“It was a chance for our young people to explore fun ways science is used in the real world,” said Barbara Guzzo, family enrichment manager for the Suisun Kroc Center. “They developed critical thinking skills and learned a lot this year about the scientific process.”

The fair is one component of the Kroc Center’s new Kroc University program, which offers students “electives” in fitness, education, music and character development.

“What made it fun was getting to make something that’s about what I’m learning in school and trying all the activities,” said Amyah Whittenberg, 8.

Kids show off their displays at science fair.

Frances Reinking, 8, was initially reluctant to participate in the fair, but by the end say, “It was so cool that I want to do something with chemistry next year.”

Participants also enjoyed the “Kroc Science Experience,” an area devoted to interactive science displays that they could try out with their families.

“As a judge of the science fair, I was extremely impressed by all the projects submitted and I believe it speaks to the quality of the new Kroc University concept,” said Captain Vickie Harvey, corps officer.

All science fair participants received a certificate of achievement, and the first-place winners received new bikes, thanks to a generous local donor.

“Many projects were family efforts, and it was exciting to see the students’ pride in what they accomplished,” Guzzo said. “We hope to expand to a much bigger event next year and include middle and high schoolers as well.”