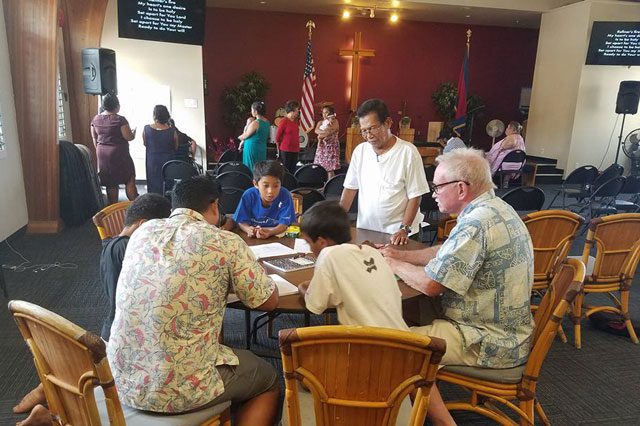 Sunday service featured six different prayer stations.
The Kona (Hawaii) Corps recognized World Day of Prayer at its Sunday worship service by setting up six prayer stations in the chapel. Corps Officers Lts. Richard and Joanna Wang encouraged congregation members to move about as they pleased, taking the time they needed at each station. Each prayer station had brief instructions and relevant Scripture verses.
The stations were “Rest,” “Praise and Thanksgiving,” “Forgiveness,” “Salt of the Earth,” “Pray for the World,” and “Pray for Yourself.”
At the “Rest” station, people could draw a picture or write a note to God, expressing whatever was on their hearts, using coloring pages or journals, and reflecting on Psalm 119:105 and Matthew 11:28. The written expressions will form the beginning of a corps journal.
Visitors to “Praise and Thanksgiving” found butcher paper on the wall and markers available for them to draw pictures or write phrases expressing their gratitude; Bible verses were Psalm 106:1 and 1 Chronicles 16:8.
Meditating on Psalm 103:12 and 1 John 1:9, people sought deliverance at the “Forgiveness” station from whatever was blocking them from a closer relationship with God. They inscribed these hindrances on a white board, and as they asked God for forgiveness, they erased the board, symbolically showing their understanding that because they are forgiven, they can release their guilt.
At the “Salt of the Earth” station, visitors tasted salt, considered its importance (Matthew 5:13), and asked God to direct them to those people to whom they can be like salt.
At “Pray for the World,” people wrote prayer requests for specific countries on Post-it notes and placed the notes on a globe; Scripture was 1 Timothy 2:1. Finally, at “Pray for Yourself,” people prayed for their own needs, writing them on note cards that went into a prayer request box; Bible verses were 1 Peter 5:7 and Philippians 4:6-7.
“This seemed to be received very well by our corps people,” Joanna Wang said. “These activities kept the children, teens, young adults and older adults engaged—they seemed to enjoy both the time of prayer and the fellowship at the same time… The Lord guided this time together and he blessed it.”
The Kona Corps serves and ministers to people residing on the west end of the Big Island of Hawaii.