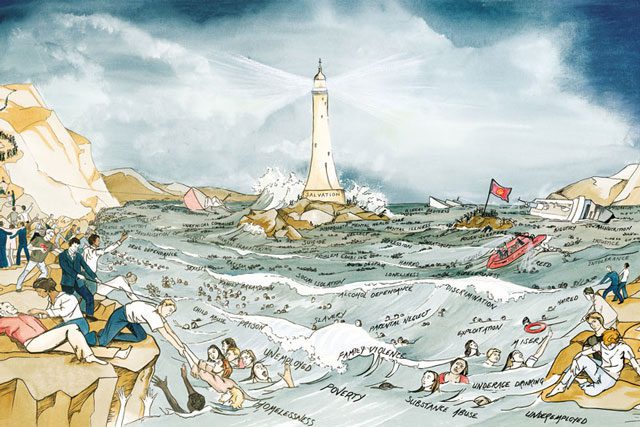 How does The Salvation Army help with housing and homelessness?

“Go and do something.”

William Booth’s words to his son Bramwell ring as true today as when he spoke them in 1888. Booth had become aware that people with no homes were sleeping under a bridge in London, and was compelled to act by providing food, shelter and a warm place to stay to men, women and children in need. That compassion continues to this day with The Salvation Army’s housing and homeless services.

For those facing extreme heat, unbearable cold, wet weather or other dangerous elements, Salvation Army shelters are a welcome respite featuring a safe place to eat, sleep and shower at no cost.

Rather than separating families in need by gender or age, The Salvation Army’s family shelters help parents and children of all ages stay together. In addition to temporary shelter, they provide families with meal-planning, utility and long-term housing assistance.

“In Darkest England and the Way Out”

In 1888, after witnessing large numbers of men sleeping under bridges crossing the Thames, General William Booth began to turn the Army’s attention toward assisting the homeless.

In 1890, Booth published “In Darkest England and the Way Out,” which documented the appalling conditions in which many of London’s poor lived.

Nationwide, Booth claimed that the total of what he called the “submerged classes” numbered around three million, or one in 10 of the population—“the submerged tenth.”

In his book, Booth proposed a new “social scheme,” which outlined a number of practical ways that the poor could be helped. Booth envisioned three types of communities be created:

THE CITY COLONY—to “gather up the poor destitute creatures, supply their immediate pressing necessities, furnish temporary employment, inspire them with hope for the future and commence at once a course of regeneration by moral and religious influences.”

THE FARM COLONY—“this would consist of a settlement of the colonists on an estate in the provinces, in the culture of which they would find employment and obtain support.”

THE OVER-SEA COLONY—“in our Colonies in South Africa, Canada, Western Australia and elsewhere, there are millions of acres of useful land to be obtained almost for the asking…We propose to secure a tract of land in one of these countries…settling it gradually with a prepared people, and so create a home for these destitute multitudes.”

Following the enormous success of the book, and the income it generated from sales and donations, The Salvation Army began to put the scheme into practice. A wide variety of social care establishments were opened, initially in London and later spreading to cities in Britain and around the world.

Get a free digital download of  “In Darkest England and the Way Out” by General William Booth at gutenberg.org and iTunes.

Sharing is caring!
Tags:
Homelessness, In Darkest England and the Way Out, January/February 2019, know your army, resources, shelters, William Booth