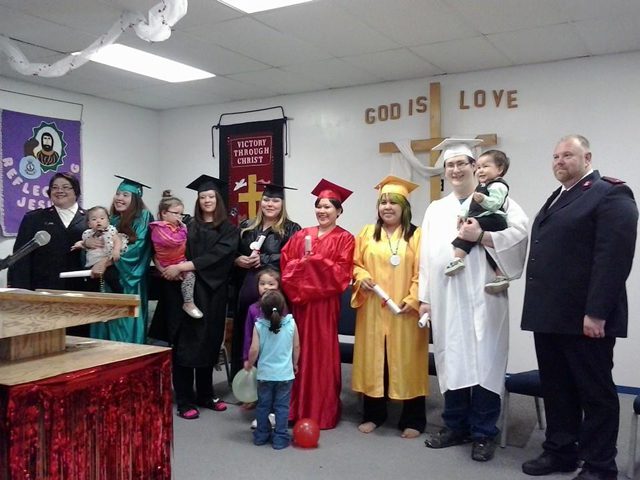 “The foundation for this event started during our training at CFOT [College for Officer Training at Crestmont],” Corps Officer Lt. Michael Evans said. “We were taught that when we receive an appointment we are not appointed to the building but to the community. Noel took that to heart.”

Kake is a village of about 400 people, and when something bothers a portion of the residents, the rest of the town soon knows about it.

After the Kake High School graduation, people who had passed their GED test felt sad and left out. Not able to “walk” in a graduation ceremony, they believed their accomplishments went unrecognized. Talk around the community turned to why these graduates don’t receive a celebration.

“As a GED graduate myself, I understood. I never knew what it was like to walk in a service of recognition until I graduated from CFOT. I knew I had to do something to allow these people the honor of feeling the emotions that take place during this type of ceremony.”

Evans went into action. She checked with the Organized Village of Kake, a federally recognized tribal government that serves the community and administers the test, and got the names of everyone who had passed the exam in the last four years. She placed calls to them, asking if they’d like to take part in a ceremony. Six people said “yes.”

In less than a week, Evans organized an event that brought together over 85 people who showed their respect and support for the graduates.

“It was a very nice ceremony,” Tribal Elder Joel Jackson said. “Lieutenants Mike and Noel did a great job. The graduates worked hard to get their GED; this will enable them to earn more money and perhaps they go on to higher education…hopefully this will encourage others to get their GED. So proud of these graduates.”

These individuals all had one thing in common: They had overcome hardships and turmoil and dedicated themselves to doing something to better themselves and improve the lives of their families. Each graduate was able to choose their own “walk” music; they could even have their kids alongside them as they made their way to the podium to receive a certificate of excellence award from the city of Kake and The Salvation Army Kake Corps.

“This was awesome,” GED graduate Dannielle Connolly said. “I hope it motivates more people who had problems and could not complete high school to now triumph and get their GED!”

The Evans plan to make this an annual event at the Kake Corps.