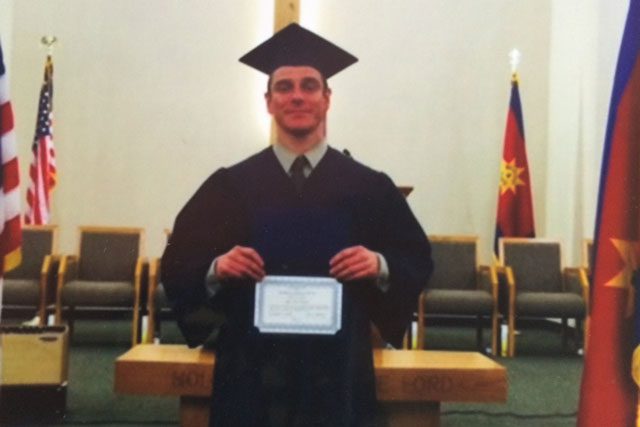 Jason Johnson, 34, was promoted to Glory Oct. 1. A victim of a shooting at Umpqua Community College in Roseburg, Ore., Johnson graduated from the Portland Adult Rehabilitation Center (ARC) July 15, and was in his fourth day of college.

“Jason really gave himself to this program 100 percent; he gave himself to the Lord in chapel early in his program and as we watched him grow in his faith we saw tremendous changes in him,” said Captain Dennis Earnhart, administrator of the Portland ARC. “He worked hard on his journals, was active in his counseling as well as process groups. He embraced the work therapy unit and was someone we could count on.”

After 90 days in the ARC program, Johnson became a mentor to newcomers.

“Jason took ownership of this and was a positive influence in the lives of a number of new men who came in and helped them adjust while showing them the way of the Lord,” Earnhart said.

He was one of the first to complete the center’s new GED program, and received his GED with honors.

“On graduation night, he received three challenges from a man in his process group: build a support system in Roseburg, continue to develop a relationship with the Lord while going to meetings, and to continue in education by going to college, modeling his life after what he learned at the ARC,” Earnhart said. “Jason did all three of these.”

Johnson’s family released a statement, which was read by a law enforcement official during a news conference.

“Jason Johnson, age 34, was proud to be a Christian,” it said. “Jason recently enrolled in school at Umpqua Community College. Jason’s mother said that Jason was proud of himself for enrolling in school, and so was his mom. They felt that Jason had finally found his path. His family says that he will be loved and missed.”

“Jason was a model of excellence in his walk with God and with his program of recovery, reminding himself that they go hand in hand,” said A/Captain Adriana Earnhart, Portland ARC director of special services and program. “We thank God for his witness to all of us at The Salvation Army Portland ARC.”