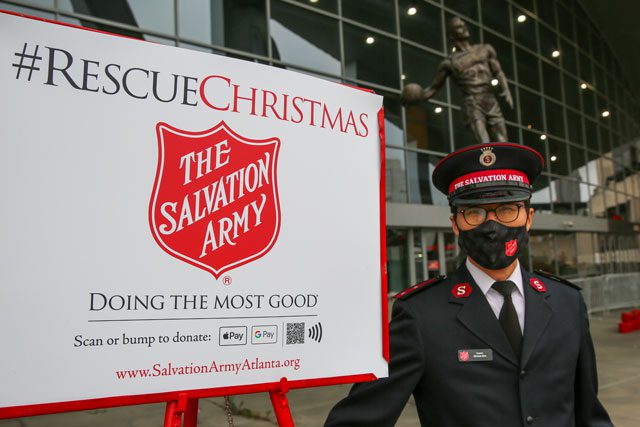 Following the Sept. 14 launch of the nationwide Rescue Christmas campaign, Salvation Army units throughout the West began fundraising and assistance efforts to meet the amplified need caused by COVID-19. The augmented giving season aims to stave off anticipated deficits due to pandemic-related factors, like the closing of retail stores, decline in the usage of cash and coins, less foot traffic at stores and an increased unemployment rate.

“After the challenging year that we’ve all just experienced, we want to rescue Christmas for the most vulnerable and share the gift of Jesus Christ,”  said Western Territorial Commander Commissioner Douglas Riley. “Since

March of this year, we’ve been serving nearly 10 times more food than in a typical year, and we’ve helped support many with housing and rental assistance as they continue to experience the economic impact of COVID-19. It’s no surprise that for safety reasons, we might have fewer opportunities to ring our bells at the kettles…Even so, we still want to care for our communities with food and shelter and gifts that make Christmas special.”

In Denver, The Salvation Army brought in more than $6,000 in the first week of its Rescue Christmas campaign. The effort was featured in a national Zoom call for best practices along with a presentation from The Salvation Army in El Paso County, Colorado.

“Our division is quite large, land-wise…so in our area, we really focused on getting some media coverage and…lots and lots of digital—everything we could do,” said Rachael Fowler, Intermountain Division PR and Special Events Director. “We didn’t actually have an in-person event.”

Corps and unit websites throughout the Intermountain Division were updated with related materials, pointing to a landing page featuring ways people can help and get help. Additionally, daily social media posts were made across the division along with a Facebook Live the day of the launch. The efforts helped the Army receive more than 60 media mentions and a 30 percent increase in website users.

In Northern California and Nevada, the Del Oro Division launched virtual red kettles Oct. 15 and created a central hub for all 31 of them at virtualredkettle.org. There, donors can click on a city or county name to designate where they want their donation to be used. The story about virtual kettle launch was picked up by some of the largest TV stations in the area

Across the territory, corps are preparing for virtual Red Kettle kickoffs, with many scheduled to happen in mid-November. In Las Vegas, the Army is holding a virtual Run For Good—during which participants who pay a flat rate of $50 can race in their own 5K, 10K or half marathon by running or walking between Nov. 1 and Dec. 26. They’ll also receive the race bib and medal that typically come with showing up for the race.

While many of the rescue Christmas efforts have gone virtual, traditional kettles will still happen with COVID-19 safety measures in place. The Reno and Carson City (Nevada) corps announced they’d join forces for kettles to rescue Christmas.

“Christmas 2020 will be unlike any Christmas in the history of The Salvation Army,” said Captain Mark Stearns, Corps Officer in Carson City. “With Reno and Carson City working together, we can pool our talents and imaginations as never before to Do The Most Good and serve more of those who have found themselves in crisis over the last year.”