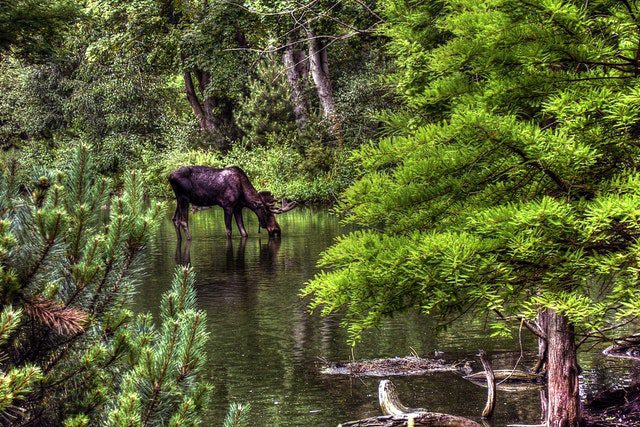 State troopers hand off surrendered moose meat to The Salvation Army, where the gift is multiplied.

In Petersburg, Alaska, hunting is no indulgence—it’s a way of life.

The city on the Norwegian-influenced Mitkof Island area relies on the meat and fish caught for its nutritive benefits. After all, in some of the island’s villages, high shipping costs have led to a gallon of milk costing $8.

“When you’re looking for proteins and meats and stuff for your family to eat, fishing and hunting is very necessary for survival,” said Major Loni Upshaw, Petersburg Corps Officer.

Each year, during October’s moose hunting season, hunters search out across the island for moose to take down and bring home to their families. In most areas, moose need to have antlers at least 50 inches wide to be fair game. Registered hunters are even required to watch an instructional video: “Is this Moose Legal?”

When a hunter kills a moose that is too young, they face fines, but they have the option to turn themselves in and instead pay a $300 fee to the Department of Fish and Game to have the meat processed.

Last year, hunters around Mitkof Island shot five moose illegally, which provided more than 1,500 pounds of surrendered meat. Of that meat, half went to the school district in Petersburg and the other half went to The Salvation Army to distribute to 10 service organizations at no cost.

“It’s important because we have a feeding program, and most of the elders don’t get moose meat anymore,” Upshaw said. “They don’t go out hunting anymore…But even feeding our kids at the school and feeding the people at the hospital and the homeless, the cost of giving meat like that to serve people, it’s expensive.”

Upshaw estimates that the 750 pounds The Salvation Army distributed fed about 3,200 people. One of the groups who received the meat is Monday Night Dinners, a volunteer operation that initially began as a prayer group before branching out to a potluck dinner for people in low-income housing areas on a Monday night five years ago.

“The response was just overwhelming. We decided to do it the next Monday night. We’ve never stopped,” said Butch Young, one of the founders. “People ask me sometimes, ‘How long are you going to do this?’ Well, until God says, ‘That’s enough.’ Because he has provided the food. He’s provided the people to bring the food. We rarely run out of food. We rarely have too much. And it seems to be orchestrated by the Lord.”

The group holds the gathering at the Narrows Inn, an old motel across from the ferry terminal that Young says is the least expensive place in town to live. Before each meal, someone delivers a short sermon. While the number of dinner attendees fluctuates, Young estimates the group feeds 30–40 people each week, with some people taking food home to their families.

The addition of the moose meat was welcome, and split between several freezers. It’s already been a hit.

“Talk about eyes light up—it’s probably because we’re in Alaska. People here love moose meat,” Young said. “It’s just one of those items that all of us appreciate.”

The group plans to continue using the remaining moose meat in dishes such as enchiladas, meatballs, chili, stew and a number of casseroles.

“It’s a blessing from God,” Young said. “When you’re involved in a problem like this, you always wonder where the next food is going to come from because it’s strictly volunteer, and to have the moose meat as a staple, it really helps. It’s a real blessing.”