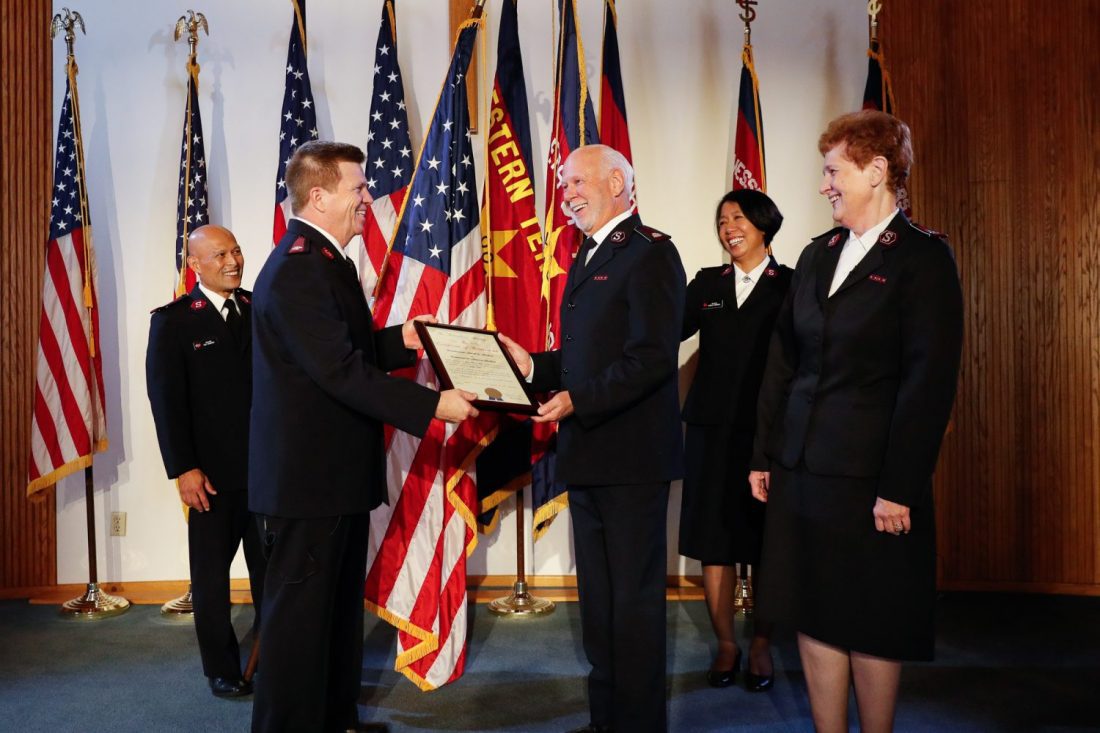 Commissioners David and Sharron Hudson received their certificate of retirement Sept. 12 during the 2020  Welcome of Cadets online event at the College for Officer Training at Crestmont in Rancho Palos Verdes, California. After serving 45 years as active Salvation Army officers, they retired in July as USA National Commander and National President of Women’s Ministries, respectively.

“This territory loves [the Hudsons],” Territorial Commander Commissioner Douglas Riley said in his opening remarks. “We are so grateful for their 45 years of service to this Army, and with the leadership they have provided… they represent 14 appointments and eight commands that they have served in and made an impact completely on this territory—immeasurable.”

Speaking directly to them, Riley said: “You have served faithfully as true soldiers of the cross, and on behalf of the thousands of lives that have been transformed because of your witness for Christ, I simply say this, thank you, from all of us.”

Dr. Jack Anderson—Director of Officer Care and Development for the Western Territory, a soldier and friend of the Hudsons—spoke next, noting that the Hudsons are the last members of the 1975 Soldiers of the Cross Session to enter retirement. He said that early on, the Hudsons set their aim high, and he quoted Philippians 3: But one thing I do: Forgetting what is behind and straining toward what is ahead, press on toward the goal to win the prize for which God has called me heavenward in Christ Jesus (13b–14).

“Thank you for loving Jesus,” he said. “Thank you for the ways you’ve invested in the lives of people…All of us are better people when we come into contact with you, because the love that you have for Jesus and the joy that you have for him just overflows and spills naturally into everybody.” He quoted Hebrews 6:10: For God is not unjust so as to overlook your work and the love that you have shown for his name in serving the saints, as you still do. Wild emphasized the “as you still do,” saying he knows they will continue to transform the lives of others by showing the love of Jesus.

In their remarks, the Hudsons spoke of the gratitude they have for God and for the opportunities they’ve had to serve others through The Salvation Army. Sharron Hudson emphasized the importance of prayer and encouragement. “I continue to pray for The Salvation Army, for those who are in active service, officers and soldiers,” she said. “I pray that the Lord will continue to guide you and direct you in your path—and know that someone is there praying for you and encouraging you on the way.”

“It’s all about grace,” David Hudson said. “It’s about the grace of God who unconditionally loved us and accepted us as we are, and we are grateful.” He said The Salvation Army extended grace in 1973 when it accepted him as a cadet. He expressed gratitude for grace shown over the years—the grace of leaders who believed in him when he didn’t believe in himself, and the grace of coworkers, who, he said, “literally made me better.” He spoke of the grace of family, and particularly of the unconditional love of their two daughters. “And it’s about the grace of this territory. West is best,” he said—noting he can say that now that he’s retired.

Commissioner Colleen Riley offered a closing prayer of gratitude. Afterward, the Rileys presented the Hudsons with a book of letters and a labyrinth plaque of Scripture verses.