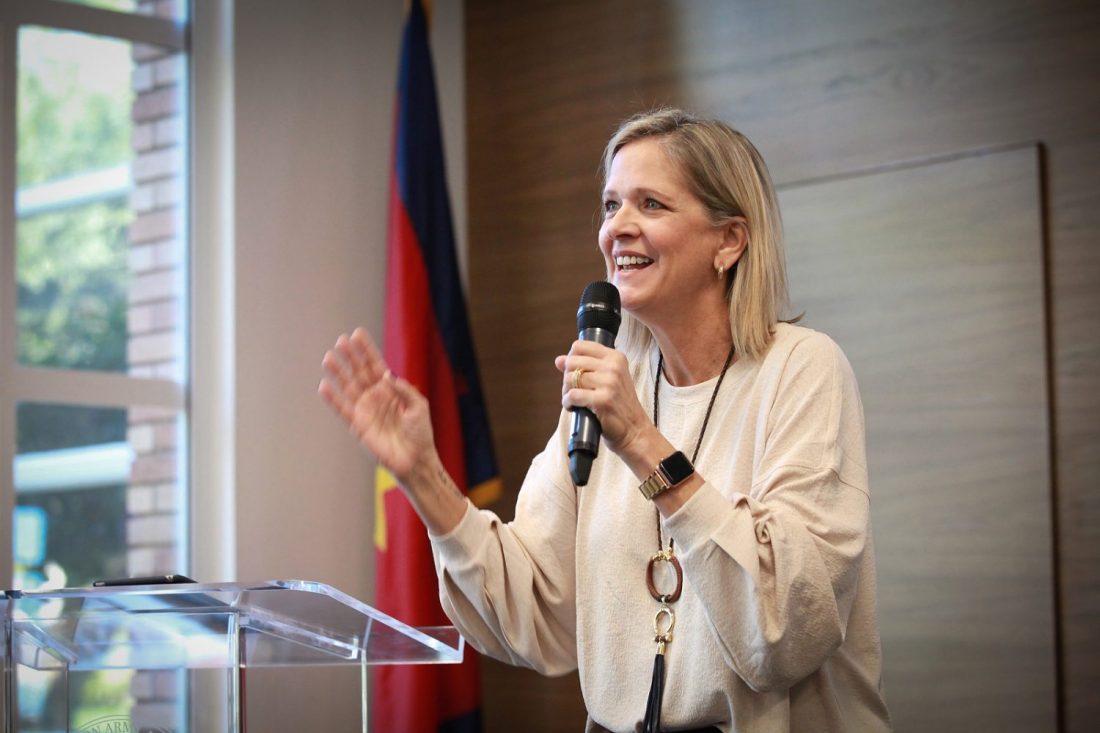 Cadets at the College for Officer Training at Crestmont (CFOT) and Territorial Headquarters employees entered the college lecture hall Oct. 29 and faced an unusual sight—a pitched tent on one side of the lecture area. Cadets and employees had come to hear Holly Wagner—Senior Founding Pastor of Los Angeles’ non-denominational Oasis Church with her husband, Philip—speak about church leadership. The talk was part of the Crestmont Lecture Series organized by the Territory’s Communications department.

Chief Secretary Colonel Doug Riley introduced Wagner as a “passionate woman who loves God…[who] speaks out on what God wants for women.” Through Oasis’ women’s ministry, “She Rises” (formerly GodChicks), Wagner has empowered thousands of women around the world. The author of 10 books, she also serves on the CFOT Advisory Board. The Wagners began Oasis 35 years ago as a home church; today it means in a large cathedral.

“I believe the house of God has the potential to change lives,” Wagner said.

The tent proved to be a key illustration for Wagner, who used stories from her own journey as a church leader to explain key points relevant to all people seeking to fulfill God’s plan for their lives. As she began speaking, Wagner set up a doll-size tent at the other end of the stage to represent the starting point in an individual’s journey with God. She then talked about the tricky part—the path full of pitfalls between the small tent and the large tent.

“Our job is to make the journey from one size to the next,” Wagner said, indicating the tents to each side of her.

“Enlarge the place of your tent…do not hold back,” she said, referring to Isaiah 54:2. God is looking for us to enlarge, strengthen and stretch as we walk with him.

“The battle is between the tents,” she said. And it begins as soon as someone makes the decision to enlarge. No one knows what lies ahead on the road, but we are meant to keep our trust in God. She quoted Acts 1:8: “But you will receive power when the Holy Spirit comes on you; and you will be my witnesses in Jerusalem, and in all Judea and Samaria, and to the ends of the earth.”

Of course, she said, as soon as you reach one tent, there’s always the next one. She offered three points on how to make the journey from the small tent to the large tent, illustrating them with personal anecdotes and Scripture references. The first point concerned handling the adversity and pain inherent on the journey. Decide to keep putting one foot in front of the other, she said. “If the apostle Paul could handle all he went through, I’m pretty sure we can, too,” she said.

When the pain is overwhelming, she said to get help; don’t stay “in the pain” because that’s selfish. She also reminded listeners that people have their own pace, their own journeys. “Don’t compare,” she said, acknowledging the difficulty of avoiding comparison in an age of social media.

Her second point was the importance of investing in relationships.

“We are meant to live in community,” Wagner said. “In the body of Christ, God’s assigned each of us a role… Our victories come when we work together. You’ll never get to the next tent alone. Every time we choose independence, we’re playing right into the devil’s hands.”

Her final point was to choose not to quit. “Just make that decision,” she said, referring to Philippians 1:6: being confident of this, that he who began a good work in you will carry it on to completion until the day of Christ Jesus.

While God is working in us, we do have an enemy, she said. The enemy is always trying to mess up what God is doing, but God’s purposes will prevail.

“Keep making the journey from the little tent to the big tent,” she said as she ended her talk.

A question and answer time followed, facilitated by Riley. During one response, Wagner confessed her love of confetti—how, even when circumstances seemed grim, she’d go into her back yard and toss confetti toward heaven, praising God. He is with us even when the road is darkest.

“Always operate from a place of victory,” she said.