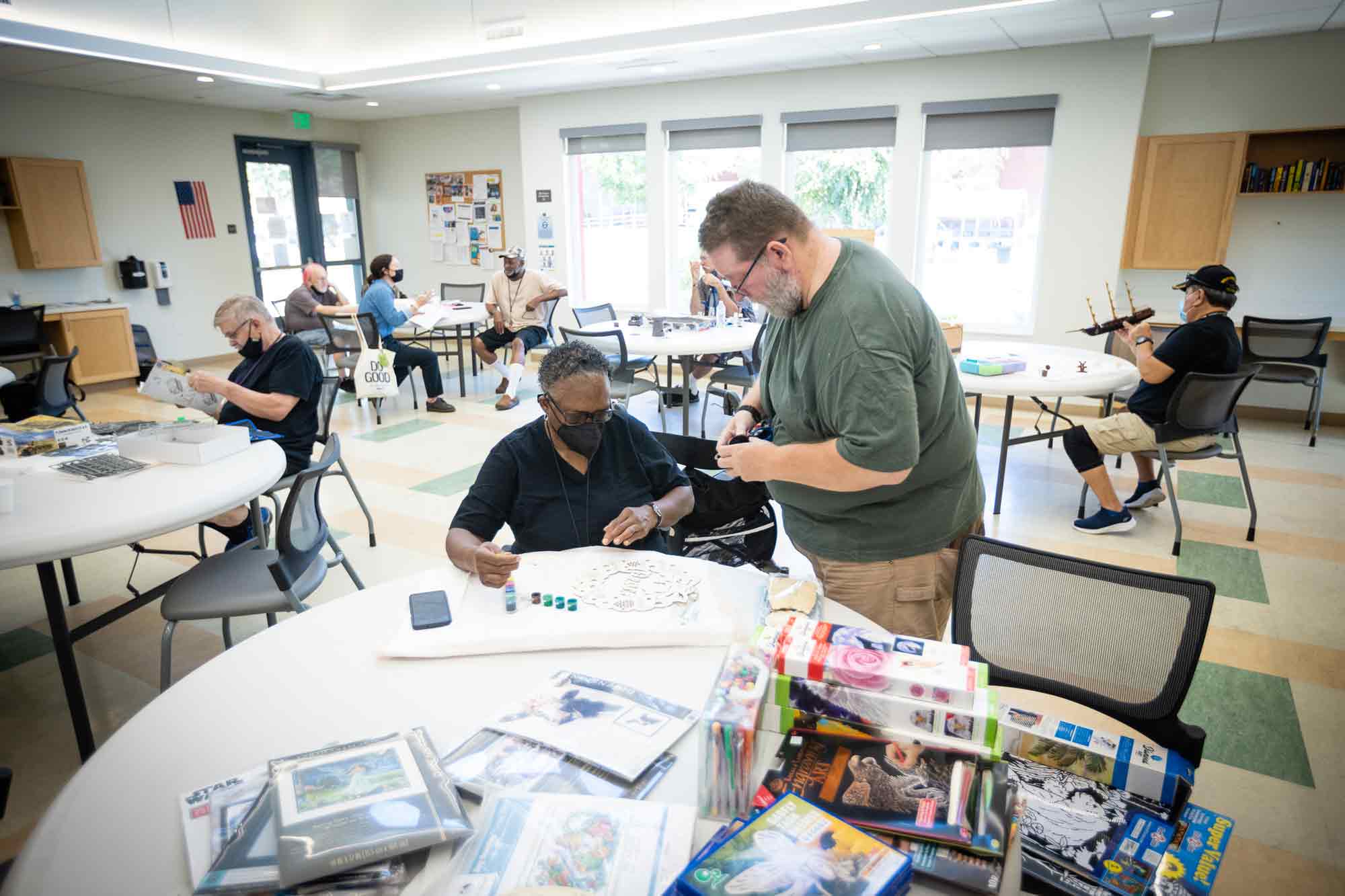 Not long after The Salvation Army Donald and Priscilla Hunt Bell Oasis Apartments opened in 2018, resident Patrick Doran began teaching an arts and hobbies class as a way to give back to his new community.

Four years later, the class continues to grow, drawing in anywhere from 8 to 15 residents each week. While in the two-hour class, each resident can choose from various materials and craft kits Doran has available, from car and airplane modeling sets to paint-by-number kits to leatherworking supplies and needlepoint patterns.

“I know how much my hobbies help me with my depression and there’s no way I’m not going to pass that on,” said Doran. “When people want to learn something, I help teach them and help them get through it.”

Although Doran said the apartment buildings are separated between veteran residents and DMH (Department of Mental Health) residents, the class is open to everyone. “We try to do things as a community,” he added. “Some come to do projects, some just come to talk and drink coffee.”

Located directly next to the Bell Oasis apartments, the class takes place in the community room where each Thursday morning Doran brings the art supplies he’s collected over the years to share with others.

The room is bright and inviting with several large tables perfect for residents to spread out their current project materials. The smell of freshly brewed coffee fills the air and often on the first meeting of the month a resident baker will bring in sweet treats, like German chocolate cake, to celebrate the birthdays of that month.

“From the beginning, Patrick’s always been someone who’s open and willing to help out,” said Karen Lee, Bell Oasis’ on-site veteran case manager. “I think in having the arts and crafts group, he’s really grown and helped a lot of people in the process.”

“It gives you something to do when you’re isolating,” said Doran, noting how crafting helped him through long periods of solitude during the COVID-19 pandemic. Even since the class started back up in January 2021, he said residents still tend to “stick to themselves” and he’s hoping the class will offer an opportunity for people to connect again.

By teaching people how to approach new arts and crafts projects, he said he’s also helping his fellow residents stay active mentally. “That way they don’t go into bad areas of their mind,” he said.

“A lot of the barriers for the veterans we serve is related to past trauma, whether it’s from childhood trauma or military trauma,” Lee added, mentioning how unaddressed trauma can lead to mental health and substance use issues for residents.

During the height of the pandemic, for “almost a full year,” Doran said the class couldn’t gather in person due to isolation orders and quarantines, which is when he said his “depression got a little deeper.” While Doran worked on his own projects independently during that time, he said he missed teaching the class and sharing his knowledge with others in need of a pick-me-up.

Research shows an association between engaging with art and lower rates of depression, according to a 2020 systematic review in the Journal of Public Mental Health. And for many residents, participating in the arts and hobbies class each week helps to improve their mental health.

As someone with a great deal of artistic knowledge, Doran said he felt like “the person most equipped” to run the class. “He’s always had this artistic side and this crafty side…like a jack of all trades,” said Lee.

“Ever since I was a kid, when I got stuck at home with hives and they couldn’t figure out what was causing it…I built every model I had because I was bored out of my mind,” said Doran. “ I did whatever I could just to keep my mind busy.”

Over the years, Doran took to new mediums like lego building, woodworking, crocheting and leather arts. While in the service, he added needlepoint to his toolbelt— a skill he continues to harness as he works to complete a large needlepoint canvas of a tigress and her cubs.

Not only does Doran help guide others in new crafts, but he also funds the majority of the class’s supplies—even offering to drive to specialized hobby stores when someone is searching for something specific. “If I don’t have it, I’ll add it to my list and try to find it,” he said.

In addition to providing transportation to hobby stores, Doran said he helps to give residents rides elsewhere when needed. “He has been giving a lot of folks rides,” said Lee, noting how most residents live without reliable transportation and have difficulty with public transit and ride-sharing apps.

“On multiple occasions when a neighbor has had an emergency, he would help and go and take people to the hospital and he would go pick people up…that’s just one of the many things he also does,” she added. “He’s always volunteering and helping people out when they need it.”

For Doran, being able to drive others is rewarding in itself. “For the longest time I didn’t have transportation and when my van broke down and it became my bedroom,” he said, mentioning the four years he spent living out of his vehicle before finding housing at Bell Oasis.

When asked where he draws his motivation for helping others, Doran cited his mother. “It was just the way we were raised,” he said. “We’d help whenever anybody needed something.”