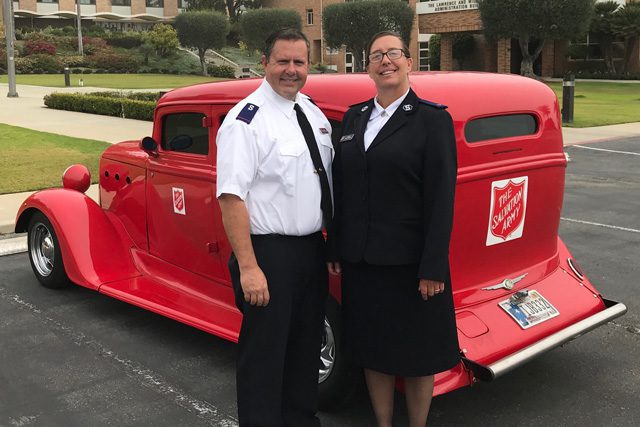 At 8 a.m. on the first Saturday of the Red Kettle Campaign, Joe greeted us.

“I’m happy to be volunteering for The Salvation Army again,” he said, adding that he wished he could do more shifts but had an upcoming surgery.

“I’m thankful for the three shifts I’ve got,” he said.

At noon, we returned and thanked him for his service, watching as he walked with a cane way out in the parking lot to a shiny red car.

The next time he volunteered, he pulled up in the same car, and we asked about it. He said it was a 1933 Plymouth street rod, fully restored. He then inquired about us.

We told him about our calling, the training college and our three teenage sons, explaining that we were new to the area and assigned to the Torrance (California) Corps for our Christmas Intensive Field Training.

Later, at the end of his shift, we said that a Festival of Lights parade was happening that night for the community.

“Someday you should drive your red car in a parade with Salvation Army shields on the sides,” we said. “Our sons could ride with you!”

At his last volunteer shift and a week before his surgery, Joe smiled as he handed us a letter.

“You mentioned that you would like to have your family in my red Plymouth Street Rod for a parade,” he wrote. “Well, your wish is about to come true. I’d like to donate my car to The Salvation Army.”

In the letter, he detailed the current value of the car and said he looked forward to seeing it in a parade.

We gave Joe a big hug as we thanked him for both his service and his unique gift.

“Go Salvation Army—what a fantastic group of people,”  Joe said as we departed with the kettle.

Our experience with Joe brought a school lesson to life.

“It’s all about relationship,” Torrance Corps Officer Major Millie Bearchell said in an interview for evangelism and discipleship class. It starts with a sincere greeting, a warm smile and finding something through which to connect.

Cadets Chris and Gina Noble are in their first year at the College for Officer Training at Crestmont.