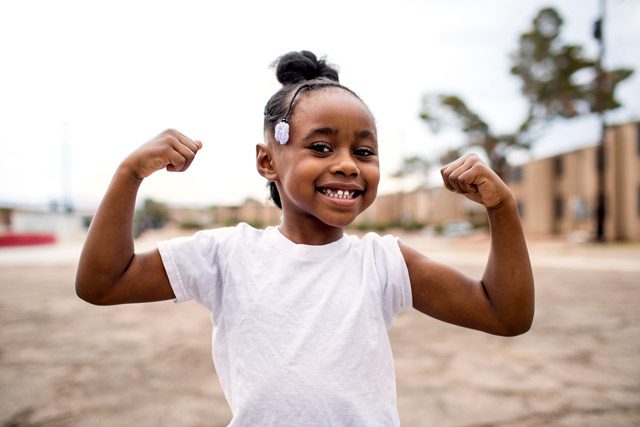 Case manager shows kids how to care for their physical well-being.

Case Manager Angela Kirkpatrick has taken a parking lot and a small community center and turned them into spaces where kids of all ages can focus on their health and wellness at The Salvation Army’s Horizon Crest Apartments complex in Las Vegas.

Kirkpatrick wants them know they are in control of their own bodies and how to care for them.

“A lot of times, bad habits have already been created,” she said. “I try to help them learn their bodies are their own. They can decide for themselves how they want to look and feel as they grow.”

It all starts with a trip to the grocery store or farmer’s market, where they learn about various fruits and vegetables available and how to be their own advocates when it comes to nutrition.

“It might be something as simple as trying a blueberry,” she added. “Sometimes one bite can lead to another. And we talk about incorporating the veggies they like and swapping smoked turkey, for example, for higher fat proteins.”

The kids take recipe books home and even get some tools to help cook and prepare meals themselves, such as graters, small knives and cutting boards.

Kirkpatrick has been a constant at the 78-unit multifamily complex since 2010. Nearly five years ago, she was one of the first to formally implement the Kids Fit Go program, part of the Healthy Army initiative designed to teach children how to make lifelong healthy decisions.

“When someone says we don’t have the time or space to do this program, Angela is a living example of how to get creative,” said Kara Cline, Director of the Healthy Army initiative in the Western Territory. “She continued it not because she was told to do so, but because she could see how it was making a difference for the kids.”

That difference could be felt in mind, spirit and body, Kirkpatrick said.

“Some of the kids were pre-diabetes when I first met them,” she said. “Many of them have lost weight, and others have learned to bypass the vending machine or choose wisely when using it.”

She’s also implemented play and exercise into the program with equipment she thinks will be fun and useful—even in a small space. For example, she uses jump ropes and hula hoops to create an obstacle course for those who don’t like running.

Yet Kirkpatrick does not take the credit, Cline said.

“The program is really showing people we love them, and God loves them,” she said. “We’re letting them know, ‘You’re special. You can make a difference.’ And Angela is living that. She’s treating these kids as special.”