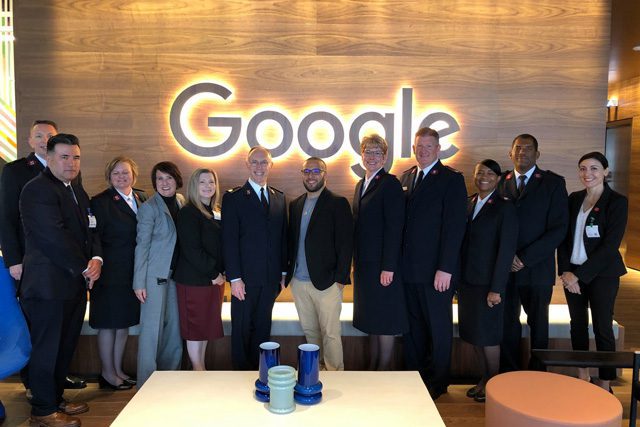 Donation the third gift from tech giant to The Salvation Army

The Salvation Army in Seattle was awarded a $1 million grant from Google, which will be used for the organization’s William Booth Center (WBC), a shelter for men experiencing homelessness in Seattle’s SODO (south of downtown) neighborhood. The Google gift marks the largest donation from a technology company to be used for The Salvation Army’s life-changing work in Seattle, and it’s the second from Google, which gave $1.5 million to the Army in the San Francisco Bay Area in August.

“The Salvation Army provides critical support, including housing and direct services for our homeless community members most in need,” said Adrian Schurr, Giving Manager for Google.org. “They are on the front lines helping alleviate homelessness at scale and Google.org is committed to continuing to support organizations like The Salvation Army in that effort. Google has called Seattle home for 13 years and we cannot wait to see the construction start on what will be an impactful effort right here in our community.”

Named for the founder of The Salvation Army, WBC serves adults who identify as male who are experiencing homelessness through emergency shelter and transitional housing services, with an emphasis on homeless veterans. The program provides comprehensive services, including shelter, meals, case management, hygiene items and referrals. Residents can stay at WBC up to two years as they work toward independence. In 2018, 156 of the residents who left WBC moved into permanent housing.

“The gift from Google will make significant impact on the lives of people served at the William Booth Center in Seattle,” said Northwest Divisional Commander Lt. Colonel Bill Dickinson. “As the need for homeless services in our community increases, The Salvation Army is committed to being part of the solution for these neighbors.”

WBC was founded in 1952 and expanded in 1993; its 190-bed facility consistently operates at full capacity. The gift from Google is the first step in determining the future of the center and exploring ways to serve more homeless neighbors.

The center represents 22 percent of the beds provided by The Salvation Army in Seattle. Every night, The Salvation Army offers a warm, safe place to sleep for 842 individuals who might otherwise be homeless. Other programs include year-round emergency overnight shelters, and full-service shelters with case management to overcome addiction, domestic violence, human trafficking and other life-threatening situations.

The WBC program reflects the philosophy of The Salvation Army in serving the “whole person”—mind, body and spirit. Tangible needs of the residents are met, including shelter, food, health and hygiene. In addition, the less obvious, and equally important emotional needs are also addressed. Caseworkers help each resident identify and resource personal issues that may be barriers to independence.