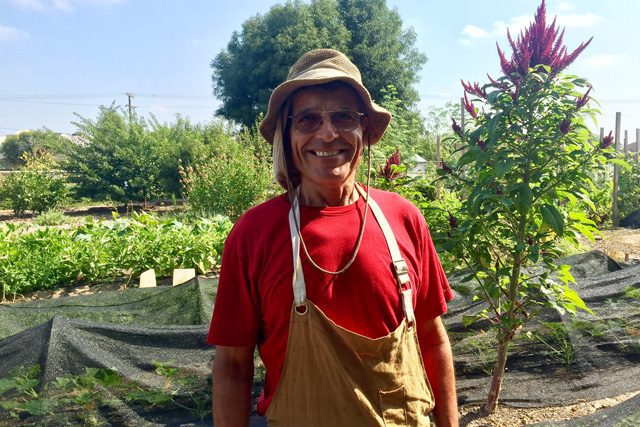 When I came to The Salvation Army Bell Shelter in Southern California, it seemed like a nightmare. I was out of a job with no home, very little money and no support from my family.

For the first few months I concentrated on my skills in computer graphics. Then I applied for a three-month employment program at GrowGood, a 1.5-acre urban farm that neighbors the shelter. Staff is projecting an output of 18,000 pounds of produce this year—more than twice the amount it produced in 2016—which helps Bell Shelter serve more than 6,000 meals each week. I thought this would be a good opportunity to earn some money while I continued my computer graphics studies.

I soon learned that working at GrowGood was going to be much more than just a job. The work was harder than I imagined, and at the end of every day I felt it. But each day it also left me with a sense of satisfaction, knowing that my labor was helping to put chemical-free, nutritious food on the plates of those experiencing homelessness. Albert Viera found a new career while working on the GrowGood urban farm at The Salvation Army Bell Shelter.

The GrowGood employment program also includes sessions conducted by Jayne Torres, the GrowGood program cultivator. Once a week we explored conflict resolution, personal strengths and weakness, keys to gainful employment and meditation. We talked about how we saw our futures and our ideal jobs. It made me think of how I saw the world as a child. I thought that if I got involved in helping the environment, maybe I could help stop all the polluting and that could help bring people together. As with most of us, as we grow older we forget about the things that seemed so important as children. As I grew, I became more concerned about what others thought of me and less concerned about what was in my heart.

Thinking about your past inevitably makes you think of your present. My address was nothing to brag about, but it was warm (sometimes too warm) and dry, and I had a part-time job that, while it didn’t pay much, I didn’t have many expenses either, and it sure was rewarding. Looking closer at my job, it was directly contributing to helping the environment. Sure, going out and sweating in the little GrowGood farm might be a small step, but it was a positive one. And I have to thank Corrine McAndrews, the farm manager, who in her words and deeds, reminds me every day of something we all know deep in our heart—that if everyone contributes just a little, the sum will be huge.

With all that in mind, I began to see my situation for what it was: a chance to do what I had wanted to do for so long. I stopped looking at my job as a temporary way to earn some spending money and began looking at it as a stepping stone to a career. I believe this change in attitude fueled my work, because soon after McAndrews told me that I was going to be kept on after my three-month program. I was ecstatic. And shortly after that, Torres told me that an organization called Community Healing Gardens was looking for someone to work in the garden at Markham Middle School in Watts. With Jayne’s recommendation and all that I had learned at GrowGood, I headed to the job interview with confidence and nailed it.

Now I work at both places, and I feel my new career is well underway. GrowGood has several projects in the works, such as community composting and a new greenhouse, and Markham is working on a partnership with an organization called L.A. Kitchen to offer cooking classes to the parents at the school.

So the rocky road of a nightmare that landed me at the Bell Shelter has evolved into a wonderful journey. Even though it is still in its nascent stages, I have a new career.

See more about the latest at GrowGood here.