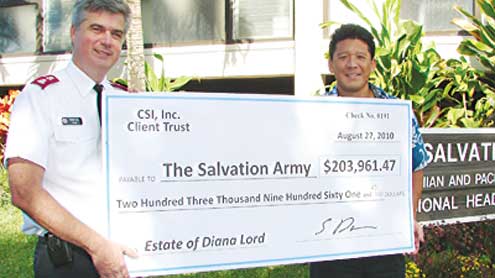 It was an astonishing act of generosity but also a mystery.

“We were caught by surprise as she had no history of giving with the Salvation Army,” said Daniel DeCastro, public relations director for Salvation Army Hawaiian and Pacific Islands Division.

She was, however, a firm believer in helping people reach their potential.

Lord was 82 when she died on March 9, 2007, at Kaiser Moanalua. She was originally from Monmouth, England, and came to Hawaii in 1954 on a teacher exchange program at Kamehameha. She fell in love with Hawaii and eventually rose up the ranks at Kamehameha’s middle school, serving as principal from 1966 until her retirement in 1982.

In her later years she lived in a penthouse on the corner of Punahou and Wilder. She hired a woman to clean her apartment. Over time the “English schoolmarm” and the cleaning lady became friends.

“I was called her caregiver, but I just thought I was being a friend to her,” the woman said. She asked that her name not be used in the newspaper and that the story focus only on Diana Lord. “We were from totally different social levels, but we were friends.”

Lord eventually sold her apartment and moved into assisted living, but hated it. Her cleaning lady offered to take her in. “I told her, ‘I just have a two-bedroom rental, nothing fancy, but I’ll fix up the other bedroom for you and you can live with me.'” Lord accepted and moved in. “I spoiled her rotten. I felt she deserved it.”

Every night, Lord would ask for a taste of her favorite ice cream, a strawberry cream-cheese flavor sold at Safeway. “I told the manager at Safeway, ‘You folks have to stock this ice cream because it’s my friend’s favorite!'”

As an educator, Lord was loved and feared with equal measure. An online memorial for her is filled with testimonials from her students. “She was a force to behold and left fear in students who she felt did not perform up to their potential. But when they did, her smile and praise would light up the sky,” one former student wrote.

Lord’s connection to Salvation Army may have been through the woman who cleaned her house and cared for her in her later years.

“I’m a recovering alcoholic, and I do volunteer work for Salvation Army,” she said. She told Lord that as a pregnant 14-year-old she went to live in a Salvation Army home for unwed mothers. “I told Diana that story, and she thought it was the greatest thing.”

Lord never married and had no children. Her estate was handled by CSI Inc., a nonprofit that provides financial oversight to seniors. The Salvation Army was her sole beneficiary. CSI Inc. Executive Director Shin Domen never met Lord, but helped administer her bequest. “Diana Lord gave an enormous gift at a time in our economy when charities are stretched thin and funding is difficult to obtain,” Domen said.

“In the end she didn’t want a memorial service. She just wanted to fade away and not be recognized,” her caregiver said. “She liked that with the Salvation Army the money would stay here locally, and she thought it was important to encourage people to better themselves.”

Reprinted with permission from the Honolulu Star Advertiser 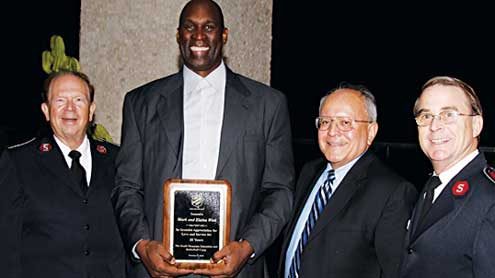