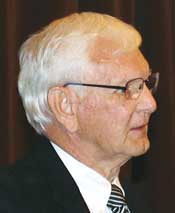 Bandmaster Edward Freeman was recognized at this year’s Commissioning for his 40 years of leadership of the Santa Ana/Tustin Ranch (Calif.) Band. Commissioner James Knaggs presented him with a commemorative conductor’s baton.

Freeman was honored earlier at a Musician’s Luncheon at the Tustin Ranch Corps, a celebration of over 100 years of combined service from three individuals: Freeman; Roberta Ames, retired songster, who served 59 years with the Inglewood, Santa Ana and Tustin Ranch brigades; and retired Songster Leader Bob Anthony, who led the Tustin Ranch Songsters for five years.

Freeman received a proclamation from County Supervisor Todd Spitzer (Orange County 3rd District), as well as a book of letters and a special “best of” music CD comprised of various tracks from all of the Santa Ana/Tustin Ranch band recordings, including the band’s first recording in 1976.

Riley spoke words of gratitude for Freeman’s leadership and example over the 40-year span, not only for the music, but also the lives touched.

“Ed, for 40 years you have been impacting lives spiritually,” Riley said. “Forty years of service as a bandmaster—that’s a lot of music, that’s a lot of practice, that’s a wonderful legacy of music ministry. You should be commended for your faithfulness.”