Focus – God and the Filmaker’s Art

“There must be a God: ‘Decalogue’ is back,” writes Kenneth Turan of the Los Angeles Times in his recent article on the Polish-made film series, and not since Cecil B. DeMille and Charlton Heston have the Ten Commandments received such a luminous review. A set of ten 53- to 58-minute films, each based on one of the Ten Commandments, “Decalogue” is now showing at the Los Angeles County Museum of Art through a special arrangement with Poland’s consul general. This is a rare event and, according to Turan, a rare treat, “as great a treasure as modern cinema has to offer.”

Wow. The Ten Commandments have come a long way since my early days in Sunday school when we memorized them with a vague sense of uneasiness born of the growing awareness they might be even more difficult to live up to than they were to recite.

Now, through the filmmaker’s art, they have become “compelling, transcendent, and rewarding.” Their inherent tension has become the material for emotionally unsettling, ambiguous pieces of film “rich in nuance and gesture,” whose characters are complex and poignant as they probe what it means to live in the space between the ideal world of the commandments and the way we end up living our lives. It seems that these cinematic gems present the commandments “gone ’90s,” about as far removed from Charlton Heston’s angry and passionate Moses as Mount Sinai is from Mount Wilson. Or maybe not. Maybe the presence of the stony tablets is never far from the films’ conflicted characters after all.

Picture Moses. See him drawing near to “the thick darkness” where God was. See him emerging fresh from God, breathless and glowing. See him pleading for his people, angry at their impatience, distressed by their idolatry. See him, the weary mediator, consumed with love, lacerated by the presence of God. Picture his eyes ­ wandering, wilderness eyes that looked through the smoking mountain for the presence of the Almighty, that looked through the wild meanderings of his people to see what a treasure they were.

Picture the Israelites. See them exhausted from their nomad’s existence, uncertain of the future. See them afraid of this rumbling God and what he might do with them. See them in the mists of forgetfulness, crafting a golden idol, turning away from their shining covenantal truth, reveling in the pleasures of the day, shattering the new commandments while the stone incisions were still fresh. See them absolutely and irrevocably human. Picture them “sinning a great sin” even in the midst of God’s caring embrace. They were the very essence of “the space between the ideal world of the commandments and the way we end up living our lives.”

It seems that whether in the biblical world of the Exodus or the cinematic world of the filmmaker, what it means to be human never really changes. As I read through the synopsis of each film with its moral dilemma, I could see the weary face of Moses and the confused faces of his people. The choices we make are never easy, and we often turn aside from the shining, God-carved truth. The mountains blaze and smoke and tremble, and many times we don’t even see. When we talk about the Ten Commandments, we are talking about ‘cinema verite.’

What I didn’t really understand in those early Sunday school days, but what I understand now, is that the Ten Commandments are not just laws and rules given by a harsh schoolmaster God. The commandments are life, our life, carved out by a God who knows us ­ our apostasy, idolatry, blasphemy, stealing, killing, lying, coveting ­but who loves us with an everlasting, compassionate love. “This is who you are,” God seems to say, “but please, please, my children, don’t do the things that will hurt you ­ do the things that will bring you peace.”

Another thing I didn’t really understand in my childhood preoccupation with rules is that in the space between the commandments and the way we live our lives is a glowing, elastic grace, another worthy subject for the filmmaker’s art. At the center of this film would be another weary human face, the face of Jesus. I’m so glad that I understand this now and that I see his face in the gap between what I want to be and what I am — at the nucleus of all of my dilemmas.

All of the films in “Decalogue” take place in a Warsaw apartment complex. Director Krzysztof Kieslowski has placed “the same watchful character in almost every episode, a man whose silent presence seems to be saying something just beyond our understanding.” A director’s genius, no doubt — human life exposed through a film’s translucence. Thomas Merton put it another way: “We are living in a world that is absolutely transparent, and God is shining through it all the time. . . The only thing is that we don’t see it.” 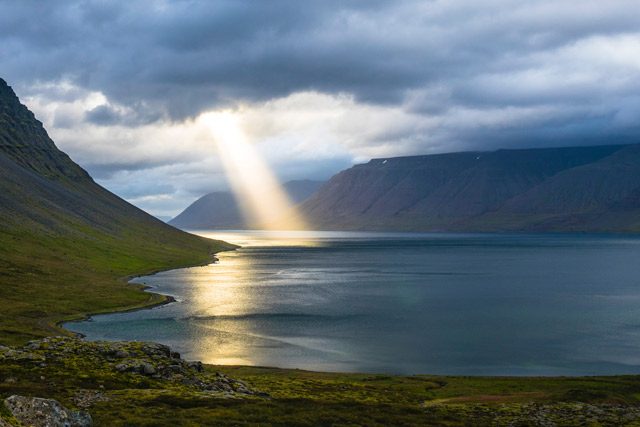