Feeding the hungry next door

Feeding the hungry next door The Salvation Army is hard at work to keep its food pantry shelves full.

Most people reading this newspaper are busy now with holiday plans, and face the daily question of “What’s for dinner?” instead of “Will I be able to eat tonight?” Yet today, around the world, and significantly, in our own neighborhoods, many people are asking that question.

World Food Day was Oct. 16—how many people gave it even a passing thought? This year’s theme was “Food Prices—From Crisis to Stability,” recognizing that rising food prices threaten to push millions more people into hunger.

The Salvation Army, seeking to feed the body and the soul, maintains food pantries and works with community food banks and other local resources to feed the hungry that come to its doors for help. In the last few years, need has increased dramatically, while supplies have significantly dwindled, due to fewer donations and decreased government funding. Many who used to donate food must now seek assistance. Salvation Army leaders are implementing creative thinking and expanding community partnerships to bridge the gap and fill the shelves.

Reports from across the Western Territory reveal that the need is great. In the Northwest Division, The Salvation Army operates 16 food banks throughout western Washington. The federal Emergency Food and Shelter Program (EFSP) cut annual funds to King County in July, resulting in a $150,000 loss for The Salvation Army. Similar Army programs in other western Washington counties received about 25 percent less than previous years.

“Fortunately, we continue to have strong relationships with local grocery stores, restaurants, farmers, and other non-profit organizations—their donations fill the gap,” said Divisional Commander Major Doug Tollerud. “But the need continues to grow, and the loss of federal funding is serious.” The Renton food bank, the Army’s largest in this region, distributed 30.5 tons of food in July, more than double its distribution in July 2010.

Three years ago, the Cascade Division’s Gresham, Ore., corps served 450 people per month in its food pantry. Today, it averages 1,861 people per month—160 families every week and 640 families each month. Because donations aren’t keeping up with the need, the food boxes are smaller, barely feeding a family for a day or two.

In Boise, The Salvation Army’s Client Choice Food Pantry received a truckload of food, donated by Fred Meyer stores. For the past five years, the number of people requesting food here has increased significantly. Currently, the Army provides about 200 food assistances per week.

The Del Oro Division reports some close calls this year. In Roseville, Calif., the need has tripled since 2007, the start of the recession. In Carson City, Nev., the Army used to feed about 30 families, now the number is in the hundreds. The Army maintains a partnership with Sacramento-based grocery company Raley’s, which runs the Food for Families program. With donations down from this program, which relies on giving from store customers, the Army’s supplies have dwindled, and money to buy food is not readily available.

Several corps in the Sierra del Mar Division report urgent need. Most are feeling the effects of the cutback in EFSP funds, along with the decrease in donations and increase in requests for help.

“Our emergency food pantry exists in a continual state of being a week from depletion,” said Gary J. Dobney, Victor Valley Corps envoy-in-charge. “However, we never seem to get to the point that we can’t give out 20-25 bags of food twice a week. We trust in God to keep our shelves stocked.”

The shelves at the Murrieta Corps are nearly empty, according to Corps Officer Major LeAnn M. Trimmer. “We are only just now receiving EFSP funds that we normally receive in February,” she said. “This has put a heavy strain on our pantry and our ability to provide fresh food.”

The San Diego Kroc Center is in the same situation, still waiting for EFSP funds, said Maria Todaro, marketing and public relations director. “A few times this summer, we had to post signs stating that we were out of food,” she said. “Typically, October is one of our highest months for food distribution, so to avoid running out, we’ve had to require that food requests from clients be of an imminent and urgent nature.”

The Ontario (Calif.) Corps has experienced a 50 percent drop in donations in the past year. Read about this online at dailybulletin.com/news/ci_19088873.

The trend—more families in need combined with decreasing supplies in food pantries—continues in the Southern California Division. Compared to clients served in 2008, the social service office at the Glendale Corps reports a 57 percent increase; many in need are first-time clients. Supply is not keeping up with demand, though, as food donations are down 18 percent from the previous year.

About 50 new families a day seek help at the Inglewood Citadel Corps, which is also running low on food. This dramatic increase began in September, when the corps increased the quality of its Emergency Food Pantry program. Partnerships within the community are making a difference here, though, with the Inglewood Park Cemetery and Inglewood Mortuary donating food to the corps. They are also providing a grant for Inglewood Citadel to buy food for Thanksgiving meals and food bags, as well as paying the monthly bill for the food bank.

The Alaska Division’s food banks are doing comparatively well. Ketchikan and Juneau both have about a month’s supply of food, with holiday food drives underway. Juneau recently received a donation of 400 pounds of moose meat. Community donations are essential as USDA commodities continue to decline. Anchorage is gearing up for its holiday canned food drive, which will provide food into 2012. The Army here reports an increase in individuals accessing its food pantry, which currently serves about 600-650 households per month.

The food bank in Kodiak, Alaska, is struggling, but this is not unusual for this time of year. Kodiak’s economy depends on a successful fishing season and work in the canneries. Since this season has been slow, The Salvation Army here is seeing increased requests for help.

In the Intermountain Division, the Centennial Corps has so far been able to meet the increased need, said Corps Officer Captain Nigel Cross. He noted a significant increase over the past year and especially within the past two months. The corps operates two food banks, one in Englewood, Colo., and the other at the corps building in Centennial, and stocks its shelves with food donations from the community and the Denver Salvation Army, grants from the Food Bank of the Rockies and private donations. “As we approach the holiday season there will be stress on our food banks to provide adequate food for Thanksgiving as well as to maintain regular food distribution during the following weeks,” Cross said.

The Salvation Army in Denver maintains a warehouse where food is boxed and sent to six area corps for distribution.

Currently the Golden State Division’s Modesto (Calif.) Corps’ food pantry remains stable, although the EFSP funding cutback may have a negative impact in the future. San Francisco, however, reports that no emergency food boxes are available, and the program lost $19,957 due to government cutbacks.

Maybe you feel you can’t make a difference. Consider, though, the food crisis that Philip faced in the Gospel of John (ch. 6)—a great crowd of people that had followed Jesus to the far shore of the Sea of Galilee needed to be fed, but they didn’t have enough money.

Jesus found a solution, multiplying the contribution of the boy who had “five small barley loaves and two small fish.” Jesus took the food, gave thanks, and distributed it to the crowd of at least 5,000.

God can take a small offering and work a miracle.

Consider donating to the local food banks, or leading a food drive to stock their shelves. Talk about this issue to friends and colleagues. Pray about hunger and for initiatives like World Food Day.

There’s still time to help a family have a happy Thanksgiving, but remember that need continues throughout the year on a daily basis, not just during the holidays.

Each year, elementary school students from Anchorage, Alaska’s Ignite (gifted enrichment) program participate in the Potato Project, planting and harvesting a crop of potatoes. Usually they grow the potatoes and take them home. This year, they decided to share them with seniors while conducting research on hunger in the community.

Students talked with seniors at The Salvation Army Family Emergency Services Office, the location of the Anchorage food pantry. Their questions included: Have you ever hunted or collected any of your own food? Have you ever had a garden? Have you ever been completely out of food or been very hungry? The seniors received sacks of potatoes from the students’ harvest.

Items most requested by food pantries

Next time you are at the grocery store, place extra items in your cart to donate.

canned fruit of any kind

bags of flour or baking mix

fresh produce of any kind

Many food pantries report that they receive enough canned vegetables, but need protein and carboydrates.

It costs about $50 to fill a food box with enough food to feed a family of five for a three-day period. Your local Salvation Army will be happy to accept a monetary donation. 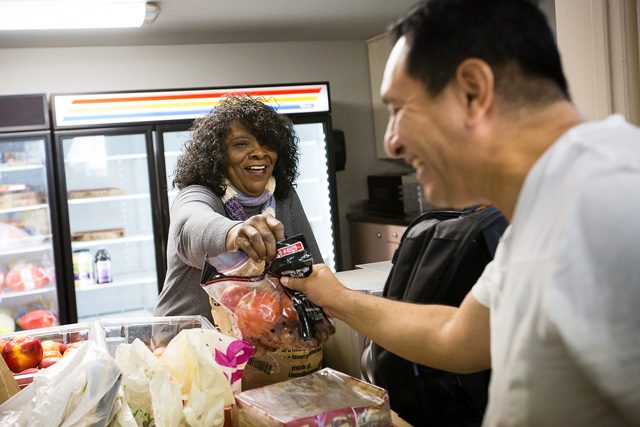 The future of food pantries? 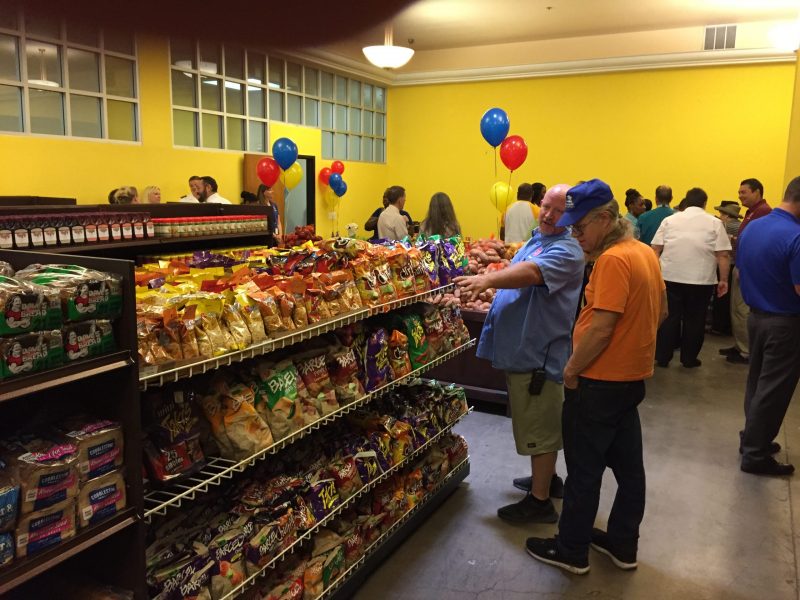 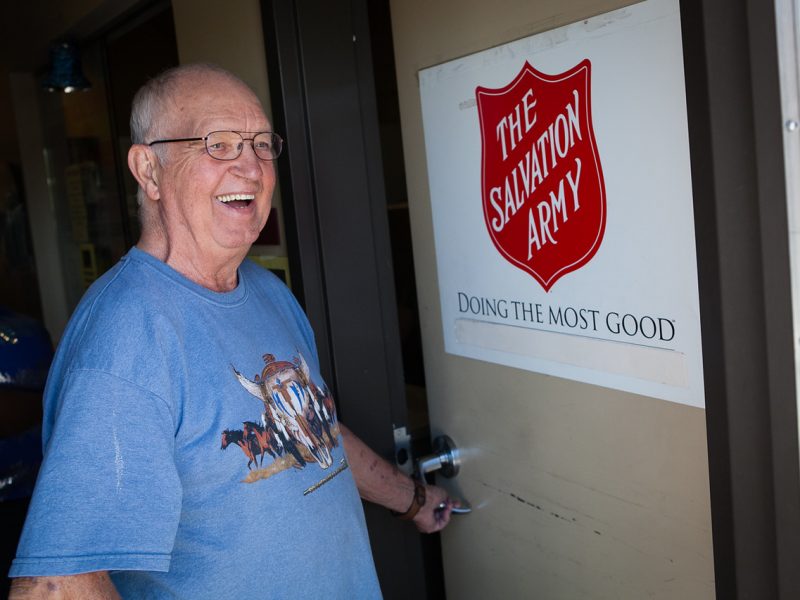