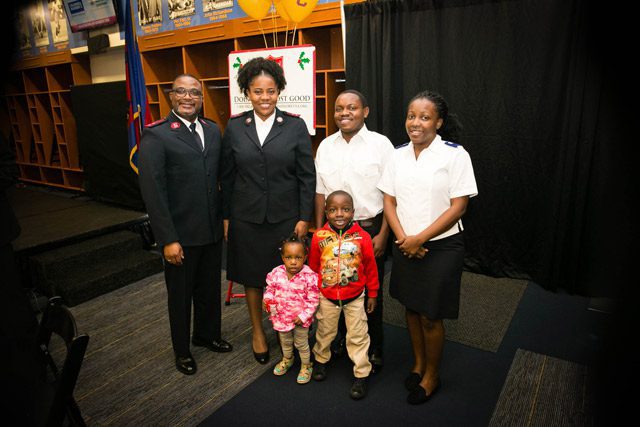 Corps ‘rolls up sleeves’ to help

Steven Seruyange knew he couldn’t tell his then 5-year-old son, Skyler, all the details of why their family was leaving their home in Uganda—they were a target of persecution; they were worried for their lives. Instead, he decided to focus on the hope he had for their new life in the U.S. He told Skyler, “we’re going to see Mickey Mouse.”

The Seruyange family—Steven, his wife, Florence, daughter, Miracle and Skyler—came to California in May 2018. When they arrived, they were advised to seek asylum. They rented a room in a crowded two-bedroom apartment for $800 a month in the San Fernando Valley area of Los Angeles.

The space was not ideal—the apartment was home to 15 people—and in the room the Seruyanges rented, an air conditioner leaked water onto the floor where they slept. Florence would wake up throughout the night to replace waterlogged towels with fresh ones to catch the steady stream of fluid.

“I hated America when we had just come,” Florence Seruyange said. “I hated everything because I didn’t know what was going on. We were living poorly.”

The living situation was taking a toll on the kids, too. One day, Skyler asked, “Why don’t we go back to our house? Is this really America?” They told him they needed to stay so Mickey Mouse could find him.

The reality of starting fresh in America without any connections, as asylum seekers, with no clear roadmap as to what to do next was difficult. A fortunate, but unlikely encounter with The Salvation Army has helped to make America home for the Seruyanges.

The Seruyanges, as Christians, knew they needed to find a church in the U.S. They walked around their neighborhood one Sunday and saw people walking into The Salvation Army San Fernando Valley Corps, but they didn’t know it was a church. They asked a man outside who confirmed it was, and they went in and were welcomed with translating devices, as the corps services are primarily conducted in Spanish.

“For some reason, we really felt at home when the sermon was ongoing,” Steven Seruyange said. A couple from the corps, Carlos and Teresa Aviles, stayed after the service to ask more about the family and made them feel welcome.

The Avileses also had two children, one of whom, a son, was born within a day of Skyler. The families became fast friends, and the Avileses offered to transport the Seruyanges to the corps for activities and church. They also invited them to their home and outings at the beach.

As the families grew closer, the Seruyanges revealed more of what they were going through. The Avileses then recommended getting to know Pasadena Tabernacle Corps Officers Captains Rutendo and Terry Masango, who are originally from Zimbabwe.

The Seruyanges wanted to know more about what The Salvation Army was about, and they wanted to meet the Captains from Zimbabwe. The Avileses drove the family to the 2018 Commissioning events held in Pasadena, where they were fully immersed in the traditions and pageantry of the Army.

“That was the sparking point of us getting sold, loving The Salvation Army, because the way things were being done,” Steven Seruyange said. “This was the real deal.”

The couple started asking themselves, what does it take to be a soldier?

“I started imagining myself being commissioned one day,” Florence Seruyange said. “I loved the uniform, the smartness, the conduct.”

During the commissioning events, the Seruyanges had lunch with the Masangos, who later invited them to dinner at their home in Pasadena. The invitation also meant the Masangos needed to pick the Seruyanges up from the San Fernando Valley. The experience gave Rutendo Masango an opportunity to see the Seruyanges’ living conditions.

“She was in shock,” Florence Seruyange said.

That week, the Masangos brought the Seruyanges to the Pasadena Tabernacle Corps Social Services, where they were given clothes, food and hygiene items.

“Who are we to get all this kind of assistance and help?” Steven Seruyange said. “Sometime that day, I remember we just knelt down and prayed to God and just cried to God for just being grateful. I mean, we had nothing.”

With the support of the Avileses and the Masangos, the family worked on a plan to find other housing. They started living in the Pasadena Tabernacle Corps’ church apartment in June 2018, soon after the Commissioning events.

“It’s really been a journey for us,” Seruyange said. “The Salvation Army is a true definition of what is talked about in the Bible. A cheerful giver is the best description of The Salvation Army.”

The Salvation Army connected the Seruyanges to the Pasadena Unified School District’s Families in Transition, which made sure Skyler got in to the best kindergarten class and received a free breakfast and lunch at school. The Masangos signed Miracle up for childcare, where she attends free of charge five days a week.

“Our Pasadena Tabernacle family embraced the Seruyange family in such a way I had never experienced before,” Captain Terry Masango said. “These were strangers God brought to us, yet the corps received the whole family as if we had known them before.”

Members of the corps donated clothes, food, money and shelter for the Seruyange family, giving them their first Thanksgiving feast as well as adopting their family for Christmas.

“When you tell this to someone they’re like, ‘No, I think that’s a lie,’ but it’s the truth,” Steven Seruyange said.  “The Salvation Army has carried us as you carry a baby from day one, to the day when you see them starting to crawl. And that is this state we’re going in right now. They have seen us from day one…and now we’re also starting to walk.”

When the Seruyanges first moved to Pasadena, neither Florence nor Steven had the appropriate permits to work. The couple offered to volunteer in the corps’ social services, and Steven put in many hours in the food bank, where he was touched by others going through tough times.

In Uganda, he worked in a bank. When the family walked down the street, Skyler would ask his father, “Do you work in that bank?” when they passed institutions like the Bank of America.

“No, I’ll show you the bank where I work one day,” Seruyange told him. “So one time, because of volunteering at the food bank, I told him, ‘Now I’m working in this bank. But this bank gives food to people who don’t have it.’”

The family also served as bellringers during the Christmas season, with Florence and Steven competing to see who could earn the most for the Army during their shift.

Now Steven has a job for a bank and Florence as a home care aid and data entry clerk. They have an apartment and things are falling into place.

“As the corps officers of the Pasadena Tabernacle, my wife and I were beaming with pride and joy as we witnessed our corps members get their hands dirty and roll up their sleeves to help a family in need,” Terry Masango said. “Now, we are humbled to share in the successes of this young family. We cannot wait to see what God has in store.”

The Seruyanges are soldiers, continue to volunteer in the corps’ social services and participate in a range of corps activities.

And, as far as Mickey Mouse goes, members of the corps made sure Skyler got to go to Disneyland, too.