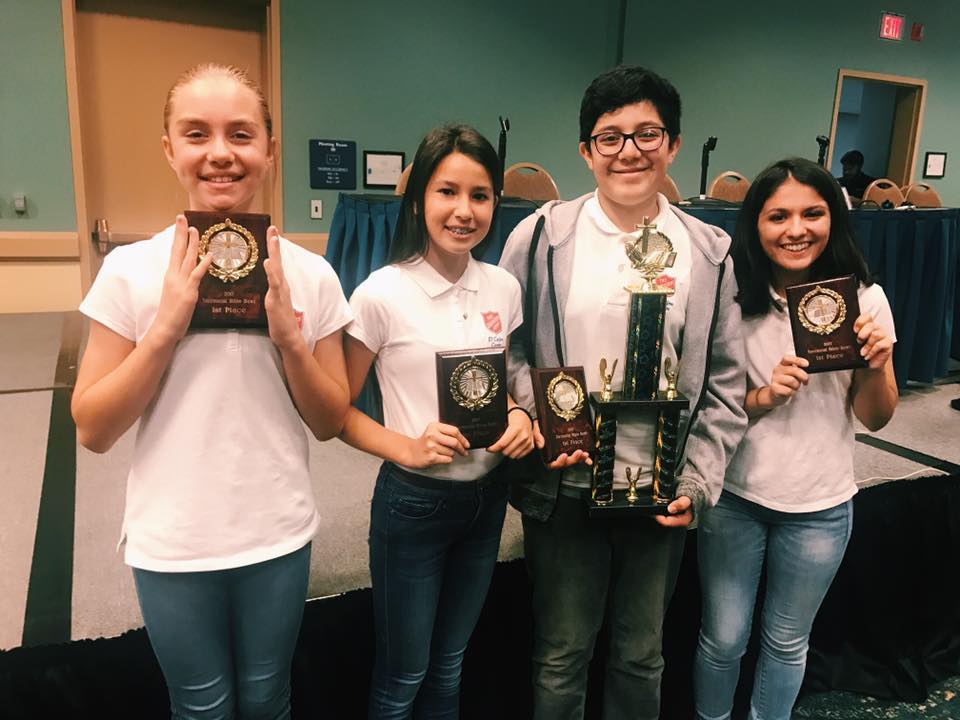 Sierra Del Mar ended Cascade’s chance of winning the championship three years in a row.
After eight months of studying and memorizing the book of Luke, the Idaho Falls Corps from the Cascade Division and the El Cajon Corps representing Sierra Del Mar Division squared off in the territorial Bible Bowl championship during Commissioning on June 3. In the end, El Cajon pulled through to win.
During the competition, judges generated questions based off of the Scripture the students studied in the months prior to the competition. Both teams spent three to four hours per week studying different sections of the book of Luke and quizzing each other over questions that might come up in the game.
Typically, one book of the Bible will be assigned to memorize and study for the competition. Sometimes there will be multiple books to study if there are fewer chapters, such as last year when the assigned Scriptures were Galatians, Ephesians, Philippians, Colossians and Philemon.
The rules of the Bible Bowl are simple. Both teams will be asked a “toss-up” question that they have to buzz in to answer. If they guess correctly, they will have a chance to answer a bonus question to total up more points, if they guess incorrectly, the other team has the chance to answer the question. There are four players ready to answer questions at a time, but alternates can be substituted out during one of the timeouts if needed.
Questions vary from basic trivia, reciting full verses and “situational” questions, where the player must correctly answer who said the direct quote read to them, to whom it was said to, and what was said after the quote.
El Cajon had a young team with no alternates, team Captain Mia Tello, 18, Alisee Wong, 15, Cesar Nunez, 13, and Chelsea Denney, 12, however, they consistently scored over 1,000 points throughout this year’s competition.
Team Captain Abigail Patterson, 15, Akira Hooks, 15, Tayler Briggs, 18, Sarah Patterson, 17, and Madison Abrahamson, 15 made up the Idaho Falls team.
El Cajon jumped to a 200 point lead, 830–610, in the final 10 minutes of the game. They won the game, 1090–810.
Bible Bowl was introduced to The Salvation Army in the 1970s to enhance the Corps Cadet program. It grew to include the kids in the corps who were not in the cadet program as way to challenge kids to get into Scriptures and to find truth for themselves.