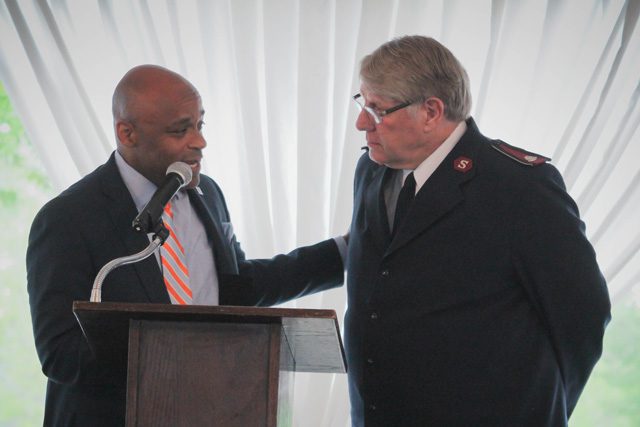 “I have watched as he has passionately fought for, spoken for, stood up against and in defense of the most vulnerable in our city,” Hancock said. “He has been an inspiration and a symbol to me… In watching him, he lived out the true meaning of the last charge that Christ left all of us.”

Only 100 Gold Coins have been awarded in the past to individuals who have made significant contributions to their community. Past recipients include former Presidents Barack Obama, Bill Clinton and Jimmy Carter.

Lt. Colonels Daniel and Helen Starrett have been prominent figures in Colorado, Utah, Wyoming and east Montana for the past seven years. Under their leadership, the Intermountain Division has prospered in many ways; for instance, it was the Western Territory’s leading division in funds raised during 2017 Red Kettle Campaign. The Starretts helped lead a successful capital campaign to complete the renovation of The Salvation Army Harbor Light Center, and they were instrumental in the restoration of the Army’s High Peak Camp in Estes Park (Colorado). During their time as divisional leaders, 18,829 children from families-in-need enjoyed a week-long camp experience in Colorado’s wilderness. Finally, they fulfilled the vision of building a new Emergency Operations and Training Center in Aurora (Colorado). Today, this center serves as a hub for disaster response and a state-of-the-art training site for a four-state area.

“I am a true believer that the best days of The Salvation Army are ahead of us,” Starrett said as he concluded his 46 years of service as a Salvation Army officer. “As long as we remain true to our mission and service, there is no doubt in my mind that we can continue doing the most good for the most vulnerable amongst us.”