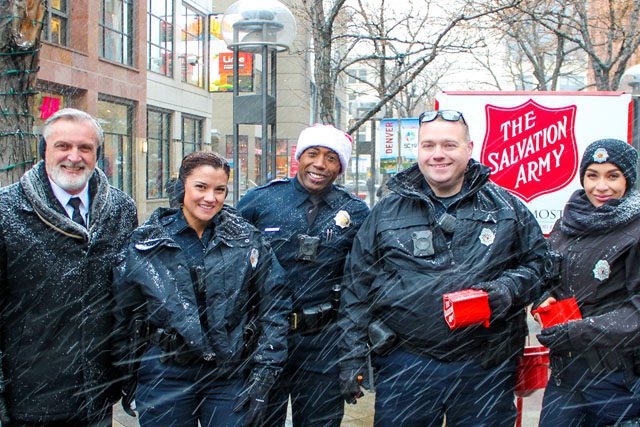 Denver Police, Fire departments compete in ‘Battle of the Bells’

Denver’s Police and Fire departments raise money for The Salvation Army in a kettle competition.

The long-existing rivalry between the Denver Police Department (DPD) and the Denver Fire Department (DFD), continued as they competed in the “Battle of the Bells” to find out who could collect the most money in The Salvation Army’s red kettles. The bell-ringing competition took place Nov. 21 from 11 a.m. to 12:30 p.m. on the 400 and 500 blocks of 16th Street Mall.

“Helping out today is important because we want to give back to our community,” said Captain Greg Pixley, Denver Fire Department. “We’re really committed to making sure that people in need get the assistance they need, and The Salvation Army can do that.”

The Salvation Army launched its annual Red Kettle Campaign Nov. 15, aiming to raise about $1.2 million in the Denver Metro area through December 24. Money raised during the Red Kettle Campaign is a critical source of funding for programs and services for those in need during the holiday season, along with funding for food pantries, social services and education programs throughout the year.

“We see people come to The Salvation Army for help every day,” said Intermountain Divisional Commander Major Mike Dickinson. “The red kettles give our community the opportunity to drop in a little change and help our neighbors in need. We are fortunate to live in such a caring and supportive place and we’re asking our friends to help us reach our goals.”

“We’re helping The Salvation Army give to those in need in our community,” said Officer Vina Maciel, Denver Police Department. “The Salvation Army helps provide the community with toys, clothing, shelter, food—and we believe that’s very important, so we’re here to support… “There’s a lot of people who need help in Denver and we want to be able to help with that. It’s important for us to be a part of that and help provide the resources they need. As far as the competition, they’re good, but we’re better.”

As it turned out, Officer Maciel was right—the DPD came out on top in the Battle of the Bells, bringing in $311 while the DFD raised $208.

New this year for The Salvation Army Red Kettle Campaign is “Kettle Pay,” providing donors with the ability to give with Apple Pay or Google Pay. As America moves toward becoming a cashless society, The Salvation Army is making it easier for donors to give back during the Christmas season. The Salvation Army has placed smart chips and QR codes on Red Kettle signs across the country, allowing shoppers to simply “bump” or scan their phones to make a digital donation.

The Red Kettle tradition began in 1891 when Salvation Army Captain Joseph McFee wanted to help feed needy citizens in San Francisco. McFee remembered the ferry landings in Liverpool England, where people would sit with small kettles that travelers would toss spare change into to help the less fortunate. Placing his own kettle on Market Street in Oakland California, McFee was able to help individuals on Christmas. The idea traveled to Boston in 1897 and the Red Kettle Campaign has been a tradition ever since.