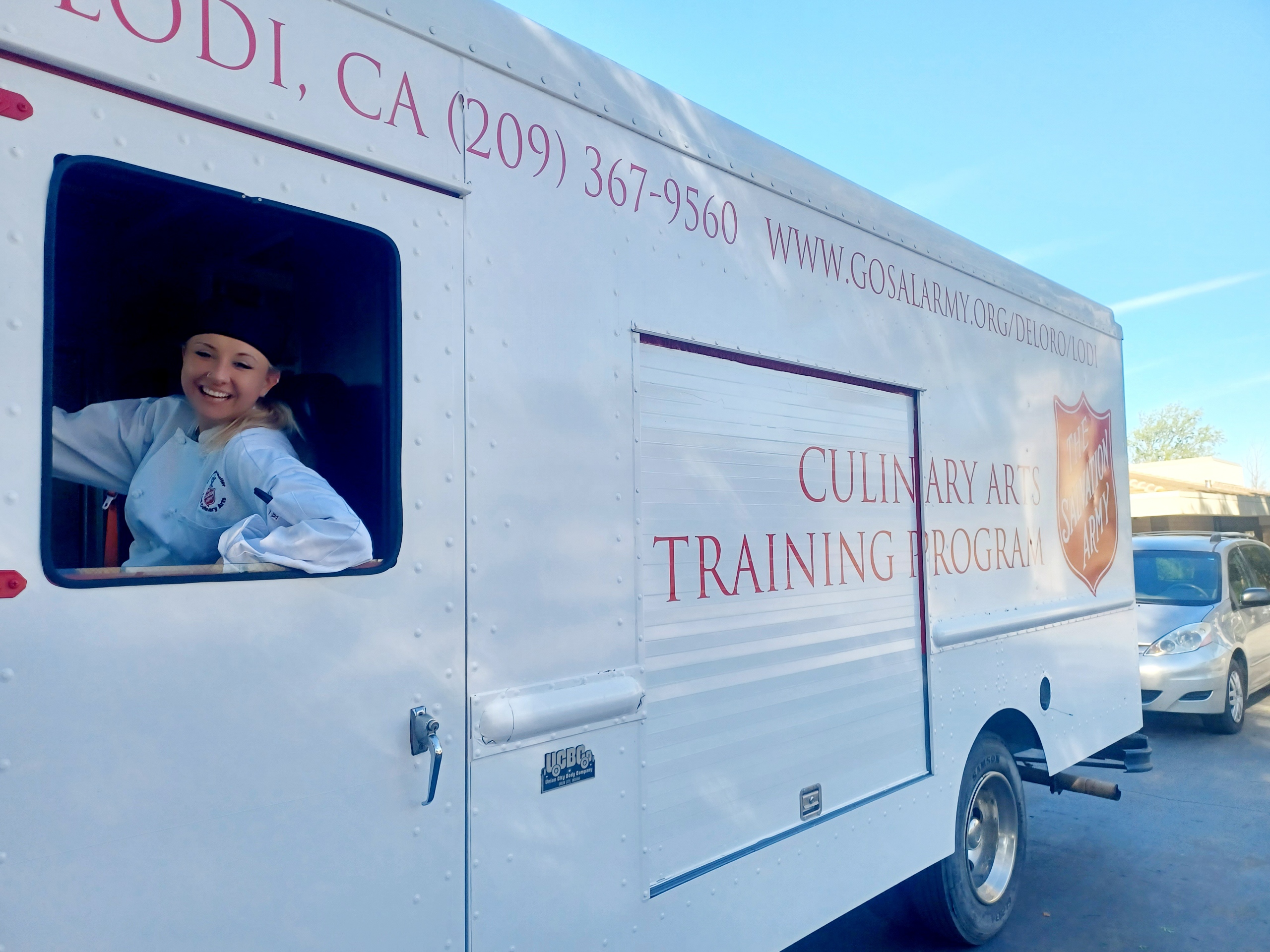 Heather Christenson turned the key and entered the door to the Subway shop at seven in the morning. She started to prep the meat and vegetables before opening, but she felt confused. Her body continuously shook, and the clipboard fell out of her hands. At nine, the liquor store opened, so she bought a bottle of vodka and gulped it like water. Her body calmed and her brain cleared.

That was the day she knew she had a drinking problem.

She tried weaning herself off alcohol by drinking less and less each day and spent time in and out of the hospital with withdrawals, but her efforts never stuck. “I didn’t realize I could live a different way,” Christenson said. Her addiction led her to eviction and couch surfing—then to sleeping in her car.

One day as she drank in her car, a police officer found her in the back seat. Christenson cried out to him: “I just want to die.” The officer showed her compassion (his daughter was also addicted to alcohol) and took Christenson to detox instead of jail.

“I knew somebody was looking out for me,” she said. “This should have ended completely differently.”

Her therapist in detox asked her if she wanted to go to rehab, and she entered The Salvation Army’s Adult Rehabilitation Center (ARC) program for the first time. The staff introduced her to God in a way she never saw him before.

“I always thought God was this judge and far out there somewhere, but I learned that God loves me,” she said.

She remained sober for 42 months, but at a company Christmas party, she convinced herself to drink just one glass of wine—and spiraled back into alcohol abuse.

She recalled a day she stood at her kitchen sink, crying out to God and listening to a song with the words: “How many times I cry out, ‘God please take this.’” She sang and wept. The next video that popped up was someone sharing a message about God being there for us. She prayed, “What am I here for? I don’t know what I’m meant to do.”

Sometime later, her drinking led her to another bout of homelessness, and she returned to the ARC program in Denver, Colorado. “I felt like I was home again,” Christenson said. 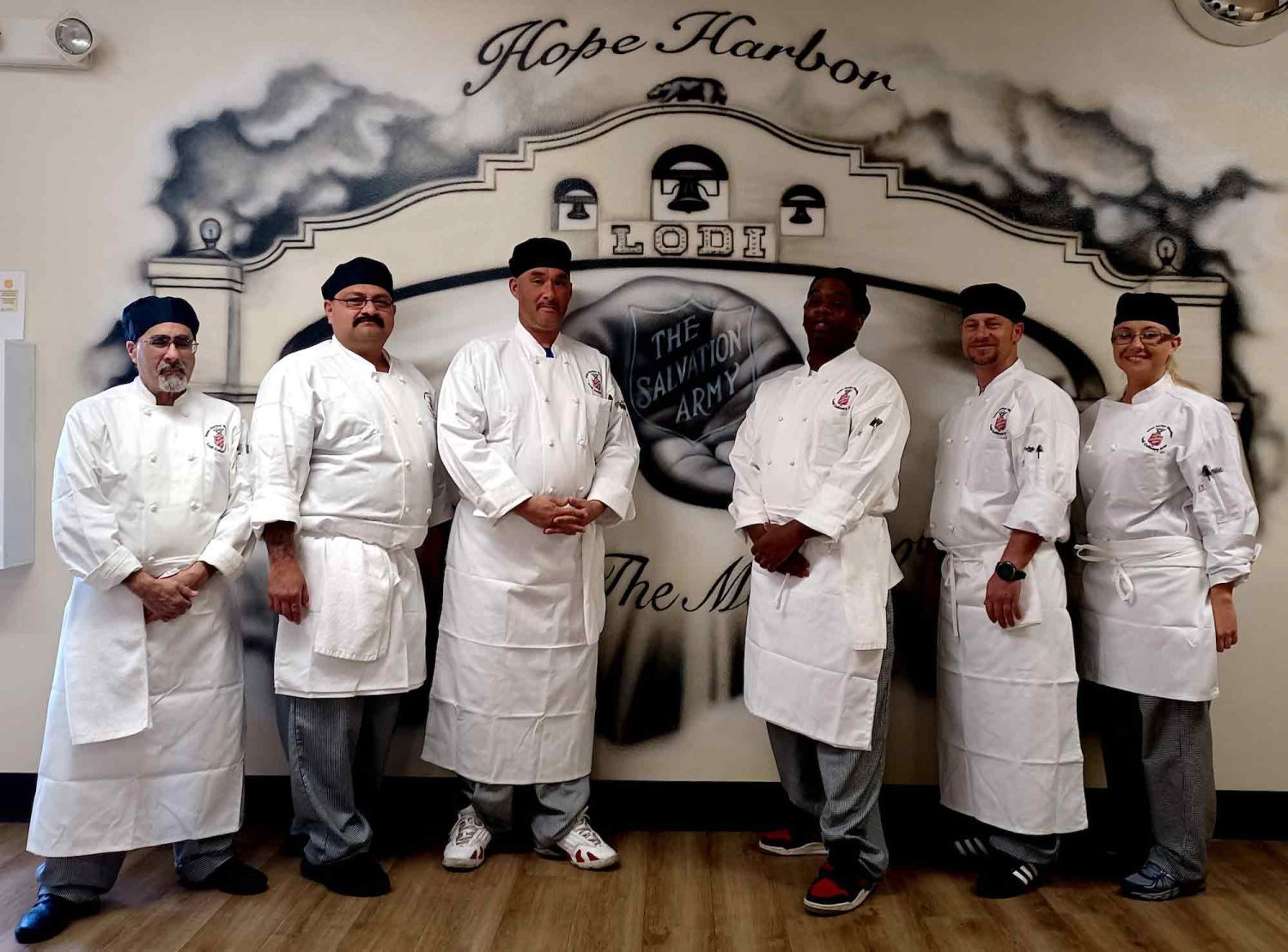 She then learned about the culinary arts program at Hope Harbor in Lodi, California, and applied. She was accepted.

In the program, Chef Barry Crall leads students from local recovery and rehabilitation programs through 16-weeks of intensive preparation to develop kitchen skills. The goal is to launch careers in the local hospitality industries.

“Helping these students is my ministry,” Crall said.

Since the program’s launch in 2007, hundreds of students have graduated and gone on to work in the culinary field. This success brings Lodi Corps Officer Major Mark Thielenhaus immense joy.

“When I walk into a restaurant and someone comes out of the kitchen and says, ‘This is where I’m working now. I’m excited to serve you lunch,’ it reminds me that the program helps people change for the long-term,” Thielenhaus said. “Workforce development must be a part of rehabilitation.”

“I thought I wasn’t good enough, but others spoke truth into my life and gave me the extra training I needed—it has been amazing to see how the program has developed,” Crall said. “With a new job skill, students don’t have to turn back to what they’ve known before.”

“Chef Barry is just awesome,” Christenson said. “He has taught me so much and I love everything—topping, baking, how to put together all different flavors to make something new.”

For Christenson, workforce development opened an opportunity for her at a local golf club where she will start serving on the food prep line. God answered her prayers—she found what she’s meant to do for this next season. “It’s only up from here,” Christenson said. “I’m not afraid to try new things anymore.”

Her dream now is to work at SeaWorld in California at the orca encounter restaurant—melding her lifelong love of sea life and culinary arts.

“I’m no longer running in place because I know God wants more for me and I can step out on the water,” she said. “I’m not afraid anymore.”