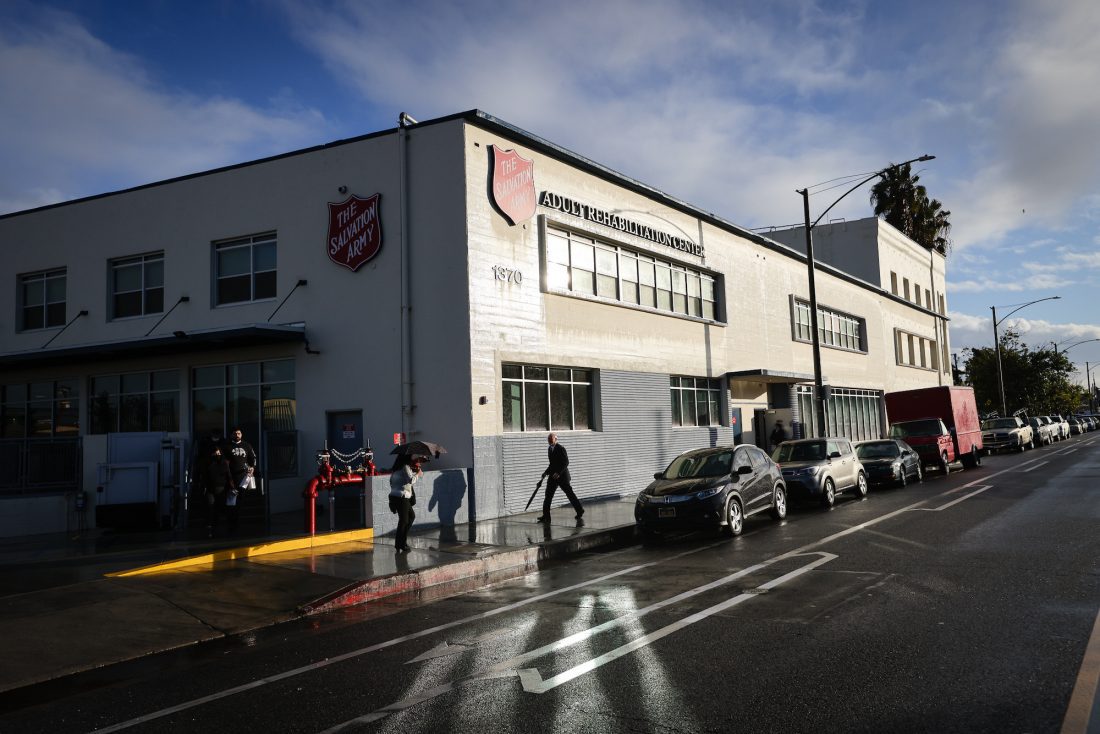 For the past four years, The Salvation Army’s adult rehabilitation center in Long Beach, California has been under construction. This month, its community and supporters celebrated the completed renovations while looking toward the future of the facility.

The program is part of The Salvation Army’s network of rehabilitation centers that have provided spiritual, emotional and social assistance to those overcoming addiction at no cost for more than 100 years. Programs offer room and board, counseling and rehabilitation services to beneficiaries with the goal of combating the root causes of prolonged alcohol and drug dependence.

Renovations in Long Beach focused on restoring the interior of the building with mindful planning to make the space more efficient for the rehabilitation process. This included newly constructed rooms that allow the facility to house up to 99 beneficiaries.

Another highlight of renovations included a larger, refigured chapel with a spacious lobby area for beneficiaries to visit with their families during the recovery process. The new chapel can hold 400 people, and services for beneficiaries occur each Sunday and Wednesday evening.

To celebrate the completely renovated facility, the ARC hosted a building dedication event with a ribbon-cutting ceremony and tours led by beneficiaries on Dec. 14.

During his welcome and introduction, Long Beach ARC Administrator for Business Lt. Dan Garrett shared his gratitude and hope for the future of the facility. He began by sharing a story of The Salvation Army’s founder, William Booth.

“William Booth was once said to address a large crowd before he became ill. He sent a telegram to be read, and when it was read at the event it said, ‘Others, signed William Booth.’ The crowd was amazed that General Booth didn’t say more. William Booth knew that he could stir and inspire those around him,” Garrett said.

Garrett went on to thank all of those who made this renovation possible from Salvation Army territorial leaders to the construction company, press, employees and volunteers. 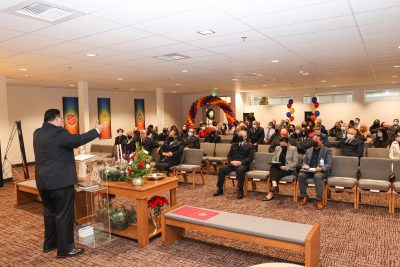 The Salvation Army’s ARC Commander Major Henry Graciani then shared thanks and remarks.

“This is a beautiful facility,” Graciani began, as he went on to thank many individuals involved in the renovation. “As you take a tour today in this facility you will recognize very quickly: It’s not a facility, it is a home.”

As renovations took place, beneficiaries underwent recovery programs at a nearby facility.
Now, in the updated space, the renovations not only provided more efficient spaces for beneficiaries to work through their programs, but also places to relax, have fun and simply live.

Graciani concluded by reminding the guests, “If you know someone that needs help with their addiction, send them to The Salvation Army. We will feed them, we will clothe them, we will house them, we will love them and we will help them rebuild that which has been shattered at no cost.” He then introduced Western Territorial Leaders Commissioners Douglas and Colleen Riley.

As Douglas Riley began his message, he recalled his visit to the facility prior to renovations. Riley spoke about how the kitchen floor wasn’t sound, how the stairs weren’t to code and all of the electrical work that needed to be redone.

“We should have torn it down. Literally, it might have been easier,” he added. But, “to transform” the existing structure instead, he said, became that much more meaningful.

“As I come here today and see this facility, my heart is just filled with joy. I’m blessed because I got to see what was and now what is,” Riley said. 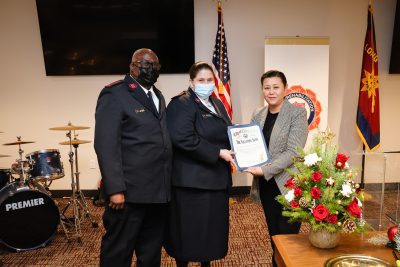 Lts. Dan and Taneya Garrett and Long Beach District 6 Councilwoman Suely Saro pose with a certificate of congratulations from the County of Los Angeles Board of Supervisors. Photo by John Docter.

Another special guest at the event was Long Beach District 6 Councilman Suely Saro. “Such a fitting acronym for the Adult Rehabilitation Center—ARC,” Saro said, touching on the symbolism of arcs meaning “much to overcome.” For beneficiaries struggling with addiction there is much to overcome, Saro said.

“I’m so grateful for those who never gave up. You deserve a place that’s welcoming in every way.”

Romero took the podium by first expressing his nerves. “I still carry a lot of guilt from my past,” Romero said.

In 2018, when Romero began his recovery journey he said he didn’t know The Salvation Army and all that they do. After going through the six-month ARC programming, Romero said he was able to reconnect with his family and start a new life sober.

Now, Romero serves as a resident manager of the facility and said he uses his past struggles and experiences as a foundation to help other men. 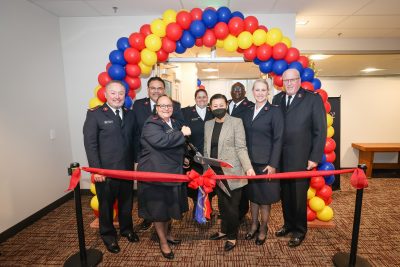 As the event came to a close, attendees were invited to tour the facility in small groups. 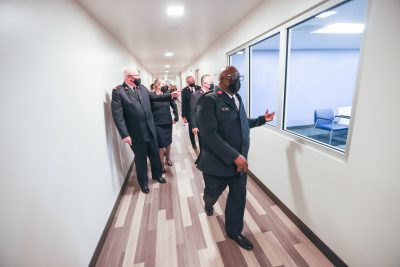 The tour included all corners of the facility, from the main entry lounge to beneficiary residences upstairs. From TV rooms and a game room fitted with barbershop supplies to a canteen shop called “Cafe Heaven.” From kitchen facilities and the dining area to a laundry room and a gym facility. 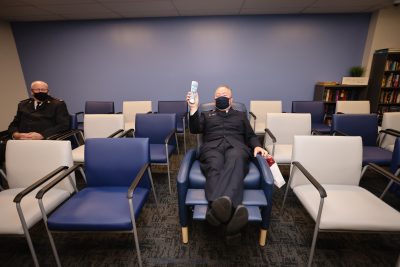 Colonel Kelly Igleheart tries out the “Beneficiary of the week” chair in the TV room with Commissioner Douglas Riley. Each week, a beneficiary is chosen for the title that gives them privileges to the large chair in the center facing the TV, as well as control of the remote! Photo by John Docter.

As attendees completed their tours and exited to the parking lot, the sun appeared after the all-day rain caused the ribbon-cutting to move indoors. 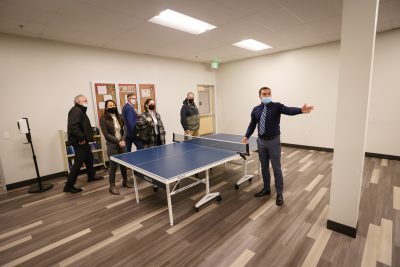 Henry (right), a beneficiary of the program, leads a tour through the game room of the facility, which he said is “definitely the guys’ favorite room in the house,” as it’s fitted with a ping-pong table and XBox gaming system. Photo by John Docter.

At that moment, a single beneficiary could be heard softly singing “This Little Light of Mine” while playing basketball at the hoop located in the back corner of the parking lot.

As the Long Beach ARC begins its new chapter–it’s clear that Hope Marches On.