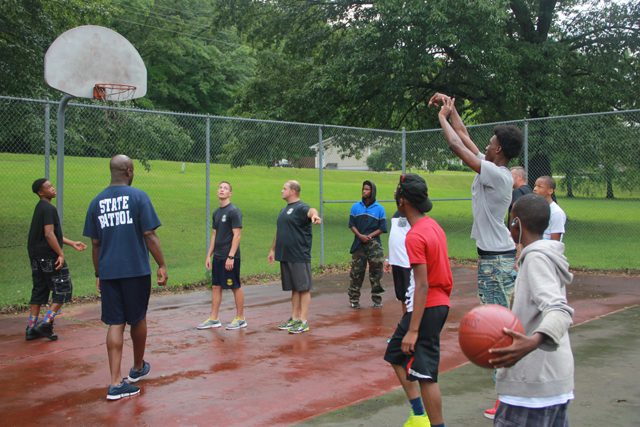 123 campers and 14 members of local law enforcement were invited to live, play, and learn together for a week. | Photo by Malinda O’Neil

Camp Mihaska has much in common with its 45-odd sister camps in The Salvation Army. Situated in the Ozark Mountain foothills about 90 minutes outside of St. Louis, Mo., here campers can relax while fishing for rainbow trout, challenge themselves on the high ropes course or sharpen their mental focus while practicing archery. But this summer, it became something else—a neutral ground where youth from some of the region’s most segregated communities came together with local law enforcement officials to look for ways to forge new relationships.

“St. Louis has a history of ignoring its racial problems,” said Captain Matthew O’Neil, divisional youth secretary. “As The Salvation Army, we can confront it and deal with it.”

That’s how the idea to redesign Discovery Camp, an annual Mihaska session for at-risk youth, as a societal bridge came to be. Born out of a conviction in local leadership that the Army had a meaningful role to play in community reconciliation around issues of racial injustice, it represents just one piece of an evolving multi-part response to how the issue has affected the region. The camp component developed in stages, as the Army grappled with how to best to strategize a significant, long-term response to the 2014 civil unrest that brought international attention to Ferguson, Mo., a low-income, predominately African-American suburb of St. Louis, in the aftermath of the police shooting of an unarmed teenager named Michael Brown.

“In light of what’s been happening over the last two or three years, anything that could bring the policing profession and the community together, I’m 100 percent behind,” said Daniel Isom, who served as St. Louis’ chief of police from 2008 to 2013. A longtime Salvation Army advisory board member, Isom signed on to the revamped Discovery Camp program after its initial run, pledging to work with area departments to recruit officers to participate in the program. Down the line, Isom said he sees potential for the program to grow far beyond its beginnings in the Ferguson crisis, with officers participating from a range of communities across the state.

Last year, two officers participated, both from East St. Louis, a troubled community just across the Mississippi River. Both cops had weathered tough childhoods themselves, something they shared openly with the campers.

It could be hard for many of these kids to imagine a future at all. Captain James Scott, secretary of men’s ministry, correctional services and multicultural ministries, who oversaw the curriculum, recalled one gathering of 16 participants in which a young camper shared the story of a cousin who had been recently killed by gunfire. “We realized that every one of us had experienced someone being taken by the gun,” Scott said.

As for the officers, “I think [they] will…get a better sense of what these young people are about. What are their hopes, what are their dreams, their fears, and how that is often times consistent with what the officers want as well,” Isom said. “When you look at officers who are in underserved communities with high crime, and young people who are in underserved communities with high crime, unfortunately both of them are often dealing with the same stressors. In different ways, but they’re both tied to the community.”