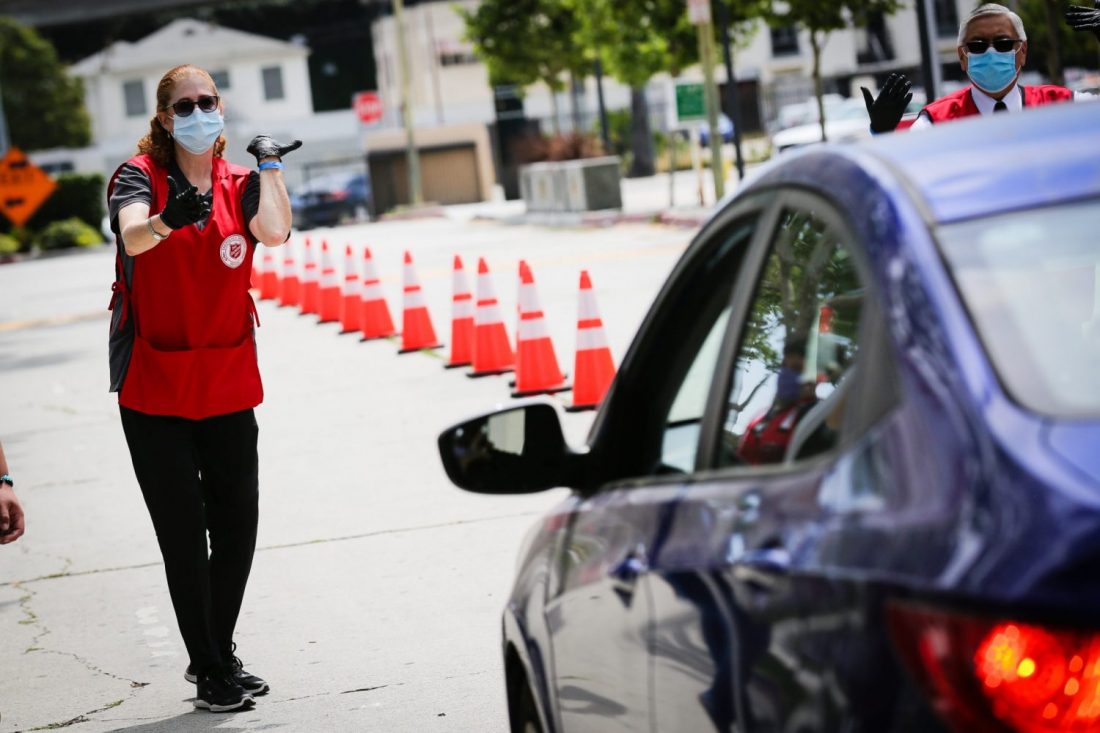 Western Territorial Commander Commissioner Kenneth G. Hodder held the 28th teleconference meeting regarding The Salvation Army’s response to COVID-19 May 26 with members of the Territorial Executive Council, divisional leaders and key staff, who joined in via Zoom from throughout the West.

ARC Commander Major Henry Graciani shared that based on the recent updates in California that allow for retail to reopen, about a third of ARC thrift stores will be reopened by the end of the week, with 11 store reopenings slated for Friday.

In Alaska, Divisional Commander Major John Brackenbury shared the state is almost a full month away from its last reported COVID-19-related death, and that the mandated quarantine has helped to keep the virus at bay. Since March 19, the Army in Alaska has provided over 100,000  meals and food, $63,000 in assistance, 11,000 nights of lodging and distributed 22,000 items.

Brackenbury said all corps in the division were open for in-person worship May 25, with those who are able posting online services as well. The division’s thrift stores have been opening, with several more reopenings on the horizon, and customers are appreciative.

The division’s program department will hold a barbecue for graduates at the Anchorage Corps. The youth department is also working on assisting the corps with summer day camp planning, VBS and summer camp in a box. Contracts with the Municipality of Anchorage for feeding have been extended through the end of June. On Thursday, to say thank you for all their hard work these past couple of months, the Army will feed the Anchorage Assembly and the City Emergency Operations Center (EOC).

When Hodder asked about any long-term results generated from the COVID-19 efforts, Brackenbury said it has helped the Army be “seen in a different light.” It has helped relationships with local and state leaders, who the Army will be working with in the coming days. “We do know that the economic impact is really going to hit [Alaska] hard,” he said.

In the California South Division, Divisional Commander Lt. Colonel John Chamness shared news of a “big week ahead” with the division’s second mass food distribution event in partnership with Latter-day Saints Charities at Dodger Stadium May 28. John and Lani Chamness visited five corps in the San Luis Obispo area last Friday, and John Chamness said they were pleased to see that a number of the corps were connected to the Families Food box program through the “Berry Man Inc.,” which includes an array of produce.

“We were overwhelmed by the great work that our corps are doing,” Chamness said. “It’s really quite remarkable the number of people they are serving.”

The Army was approached by the Los Angeles Homeless Services Authority (LAHSA) to open another hotel shelter in Studio City that would be 190 beds, and the 400-bed Grand Hotel shelter downtown has reached 80 percent capacity. At the Grand Hotel, Assistant Program Secretary for Corps Ministries and Men’s Ministries Secretary, respectively, Majors Jonnette and William Mulch have been providing pastoral care to the residents. The Mulches call every guest to pray with them and talk to them as they come to the hotel and wander down to the lobby.

The division has convened a committee for post-COVID-19 work that has examined aspects of The Salvation Army, including Christmas kettles, program focuses, fundraising and ways to streamline processes. A new mandate from the state allows corps in California to open for worship with modified guidelines and the division is working on online tools for corps to continue online worship.

Cascade Divisional Commander Major Nancy Dihle began her report with a note of admiration for corps officers and all that they’re continuing to do during the pandemic. In Albany, the Army is holding Trucker’s Table, serving free meals to truckers. Operation Share Hope food distribution continues three days a week, serving about 1,400 families a week. Through the Oregon Food Bank, the Army has been able to partner with four U.S. Department of Agriculture (USDA) businesses that have committed to provide food boxes until the end of December.

Del Oro Divisional Commander Major Ivan Wild shared several updates pertaining to The Salvation Army’s efforts in Roseville, California. The city of Rocklin, near Roseville, wants to help support the cost of the food boxes between now and end of the year. Also in Roseville, Chick fil A saw the corps’ youth activity bags and wants to provide 266 meals per week through June through the activity bag program. Chick fil A will also provide two weekly meals for those experiencing homelessness.

Toyota-Lexus Minority Owners Dealership Association partnered with the division to distribute food boxes containing enough non-perishable items and canned goods to feed a family of four for a week, along with a Safeway gift card for families in Oakland and Tracy, California, as a part of the group’s national Day of Service May 22. The Reno, Nevada, thrift store reopened last week, and sales were up 18 percent across three stores. The reopening received significant media coverage. DHQ and Sacramento officers performed drive-by graduations for five officer kids. The cars were all decorated with banners and streamers. The DYS dressed in cap and gown. He used a portable PA in the middle of the street giving the commencement address.

Golden State Divisional Commander Major Darren Norton also spoke of California’s new guidelines for reopening worship services, adding that he is hoping a few of the corps in the division might be able to reopen under the guidelines. The division’s annual Flower Power fundraiser will go virtual this year, and a drive-through farewell is planned for Major Debi Shrum’s retirement this Thursday.

Norton shared a conversation he had with Jack Kozitsky, City Emergency Operations Director, about the crisis of homelessness in the city. In the past month, shelters across San Francisco lost 1,400 beds due to social distancing, and Norton was told those beds will not be coming back. Social distancing is here to stay, at least, in homeless shelters, and more people are getting pushed onto the streets.

“I think this EDS will turn into a regular part of our metro social services in this city,” Norton said. “This is not going away.”

In Hawaii, Divisional Commander Major Jeff Martin said the state is progressing through its reopening phases and churches are now able to reopen. Most corps in the division are waiting for next Sunday to resume in-person worship services.

Teams from planned giving, major gifts and development joined forces to put together virtual tours for donors via Zoom. Each tour accommodates up to 15 donors and allows for them to see what the Army is doing for COVID-19 and other things. “It’s been very well received,” Martin said. The experience is interactive—typically two short videos with questions in between.

Hodder opened the meeting to questions, and shared leaders will not consider the territory to be on EDS service as of the end of May. He also highlighted the opportunities available by utilizing the West’s camps. He shared that he often enjoys watching his screen saver and the reports that come from the corps and ARC before reading from Psalm 67 and closing in prayer.