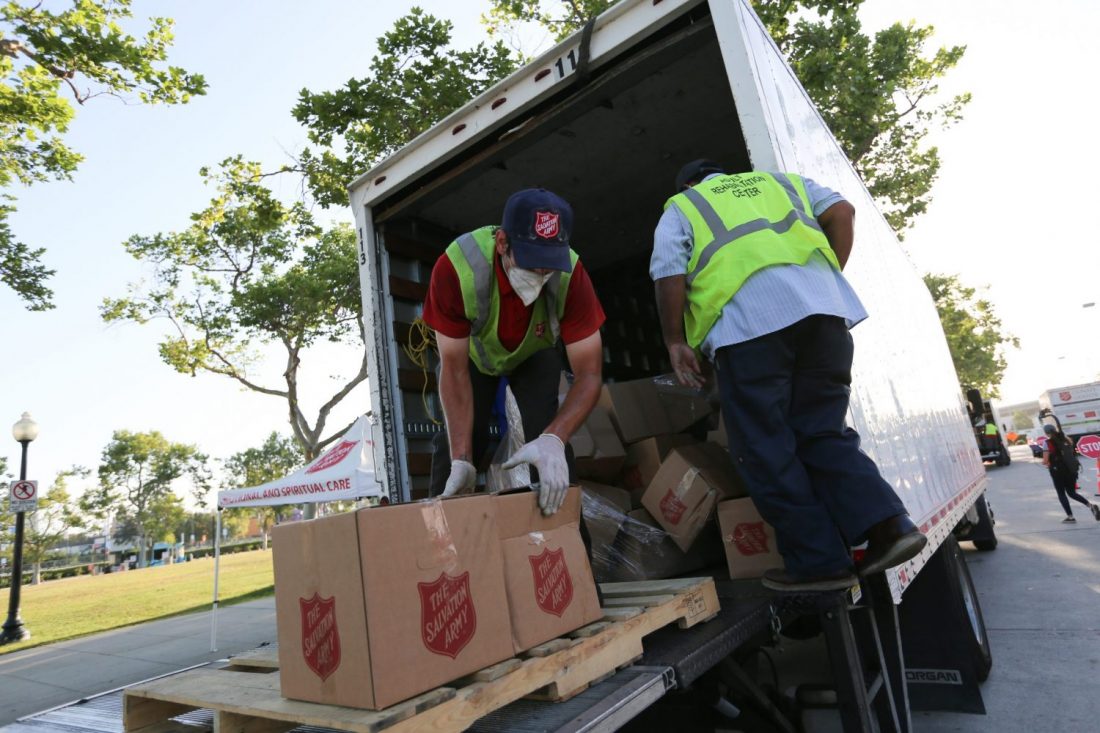 Western Territorial Commander Commissioner Kenneth G. Hodder held the 27th teleconference meeting regarding The Salvation Army’s response to COVID-19 May 22 with members of the Territorial Executive Council (TEC), divisional leaders and key staff, who joined in via Zoom from throughout the West.

Next week, these meetings will take place Tuesday, May 26, and Friday, May 29, which will be the last of these regularly scheduled meetings.

After a roll call of command heads, Hodder shared a few announcements.

National Headquarters will be issuing the revised COVID-19 disaster expenses policy. Hodder said not too many changes were made to the existing policy, which was discussed this week at Commissioners’ Conference. The policy’s effective dates are March 1–Sept. 30—the rest of the current fiscal year.

Hodder mentioned the most recent unemployment statistics: as of yesterday, there have been 38.6 million unemployment claims in the U.S., in the country’s worst economic crisis since the Depression. He said that even though these command head meetings end next week, the EDS work of the Army will continue—this is a long-term crisis situation.

Finally, he reminded everyone that today is the last day to submit video greetings for the virtual lobby that will be part of this year’s online Commissioning. The greetings can be made on a cell phone and should be about 15 seconds long, in portrait mode.

Intermountain Divisional Commander Major Mike Dickinson said the division has received 3,200 packets (eight servings per packet) of fortified oatmeal from Spark the Change Colorado. They will add these to food boxes. They will be receiving future shipments, about once a week or every other week. The division also received 50,000 N95 masks from Americare. They will give these to first responders.

General Joseph L. Lengyel, a member of the Joint Chiefs of Staff, visited the Crossroads Shelter. He was impressed with what The Salvation Army is doing.

While the NHQ/USDA partnership did not come to fruition, the division has secured a deal with a local food bank to receive pallets of fresh food—as many as it wants—for the foreseeable future. The division will get its first shipment next week.

Hodder emphasized to all commands that while the Army is not part of the USDA Farmers to Families Food Box program, this does not mean the Army can’t partner with organizations to secure food. Yesterday, the territorial Social Services department sent out a list of organizations looking for non-profit partners to work with. He encouraged the commands to reach out to them.

Lt. Colonel Lisa Dickinson gave the Northwest Division’s report. Divisional staff have spent the week doing food distributions so local corps wouldn’t have to do it all themselves. After today, they will have completed 10 distributions in various locations. They started with 4,500 food boxes, and then added more for an additional distribution in Marysville, Washington. Dickinson said she was speaking from a trailer in Vancouver, Washington; they’ve stayed in a trailer to avoid the expense of a hotel. While corps are grateful for the divisional staff’s involvement, they are very invested in the distributions. She mentioned the Yakima (Washington) Corps, where, since an employee’s spouse tested positive for the virus, everyone connected to the corps is now in quarantine for two weeks. This includes Corps Officers Lts. Nicholas and Rebecca Helms, who were so excited about the distribution that they drove to it just to see how it was going—of course, they remained in their car. Dickinson commented on how great the LDS volunteers have been during this food distribution partnership.

“The LDS partnership has been so fruitful in so many places and it’s something we want to continue,” Hodder said, noting that the territory will be putting together an LDS partnership video to thank the LDS senior leaders.

Maricopa County has contracted with The Salvation Army to provide 35 meals a day for staff and shelter residents. Pontsler said the county has been impressed with the Army’s efficiency; she believes this is going to lead to other opportunities.

Yesterday, coordinating with the Veterans Health Administration, the Army delivered food boxes, gift cards and hygiene kits to 120 individuals at Victory Place residence. Captain Sean O’Brien was the media spokesperson for this event. Victory Place staff were amazed, and expressed their gratitude for the support to the veterans in their care. This is another contact that may lead to future opportunities.

Pontsler spoke about the Navajo Nation, which straddles Arizona and New Mexico and continues to be a hotbed for the coronavirus. The Salvation Army wants to be helpful. “The challenge is finding the way in,” Pontsler said. The Army learned that the Nation is made up of 60-plus groups or independent states. The Army will be sending out 900 (four-ounce) bottles of hand sanitizer, one pallet of baby wipes and two pallets of hygiene kits (split between two groups) in the next few days. These will complement the food and water provided by St. Mary’s FoodBank.

Finally, Pontsler requested prayer support for the Farmington, New Mexico, officers and community. This area is located on a corridor that is blocked off due to a severe COVID-19 outbreak (east edge of Navajo Nation). The future economic outlook for the area is grim. Corps Officers Majors Kevin and Tammy Ray are surrounded with lockdown and isolation.

ARC Commander Major Henry Graciani was on his way to the reopening of the main Pasadena, California, family store. He shared a testimony about Eric, a beneficiary at the San Diego ARC, who returned to the program after a relapse. He nearly died due to a heroin overdose. Eric is grateful to be back in the program and is determined to stay connected to the center after completing the program so he won’t repeat past mistakes. He is leaning on the Lord for the strength and discipline he needs to stay on course.

CFOT Principal Major Nigel Cross reported that excitement is growing among the Messengers of the Kingdom cadets. In three weeks, the quarter will be finished and two days later they will be commissioned as officers and receive their first appointments. There is some disappointment that they won’t be able to have the normal farewell celebrations as a community. Overall, though, they are happy, and many of the components for Commissioning are complete. Meanwhile, the Messengers of Grace are continuing their online classes. They will have their finals after Commissioning before heading out to their summer assignments. Last Sunday, the College celebrated the youth and their achievements in the Troop programs. This Sunday, the College will honor Salvationists who have been promoted to Glory.

Silvercrest Executive Director Susan Lawrence reported that two additional employees at the Pasadena Silvercrest tested positive for the virus; neither have any symptoms. The manager tested negative is the only employee working, taking care of cleaning, maintenance and management. Silvercrest checked with the public health department, and were told they were handling the situation appropriately. Residents have been notified twice, and encouraged to stay at home and go for testing if they so choose.

A THQ Silvercrest employee’s church—St. Raymond’s Catholic Church of Downey—conducted a food drive specifically for the residents at two Silvercrests in Cal South: Lakeview Terrace and Santa Fe Springs, neither of which has a corps adjacent. This food donation provided substantial food for the residents, including fresh eggs, canned goods, dry goods and paper and hygiene products.

Hodder shared Philippians 3:1-11: Further, my brothers and sisters, be joyful because you belong to the Lord! It is no trouble for me to write about some important matters to you again. If you know about them, you will have a safe path to follow. Watch out for those dogs. They are people who do evil things. When they circumcise, it is nothing more than a useless cutting of the body. But we have been truly circumcised. We serve God by the power of his Spirit. We boast about what Christ Jesus has done. We don’t put our trust in who we are or what we can do. I have many reasons to trust in who I am and what I have done. Someone else may think they have reasons to trust in these things. But I have even more. I was circumcised on the eighth day. I am part of the people of Israel. I am from the tribe of Benjamin. I am a pure Hebrew. As far as the law is concerned, I am a Pharisee. As far as being committed is concerned, I opposed and attacked the church. As far as keeping the law is concerned, I kept it perfectly. I thought things like that were really something great. But now I consider them to be nothing because of Christ.  Even more, I consider everything to be nothing compared to knowing Christ Jesus my Lord. To know him is worth much more than anything else. Because of him I have lost everything. But I consider all of it to be garbage so I can know Christ better. I want to be joined to him. Being right with God does not come from my obeying the law. It comes because I believe in Christ. It comes from God because of faith. I want to know Christ better. Yes, I want to know the power that raised him from the dead. I want to join him in his sufferings. I want to become like him by sharing in his death. Then by God’s grace I will rise from the dead.

Hodder closed the meeting in prayer.