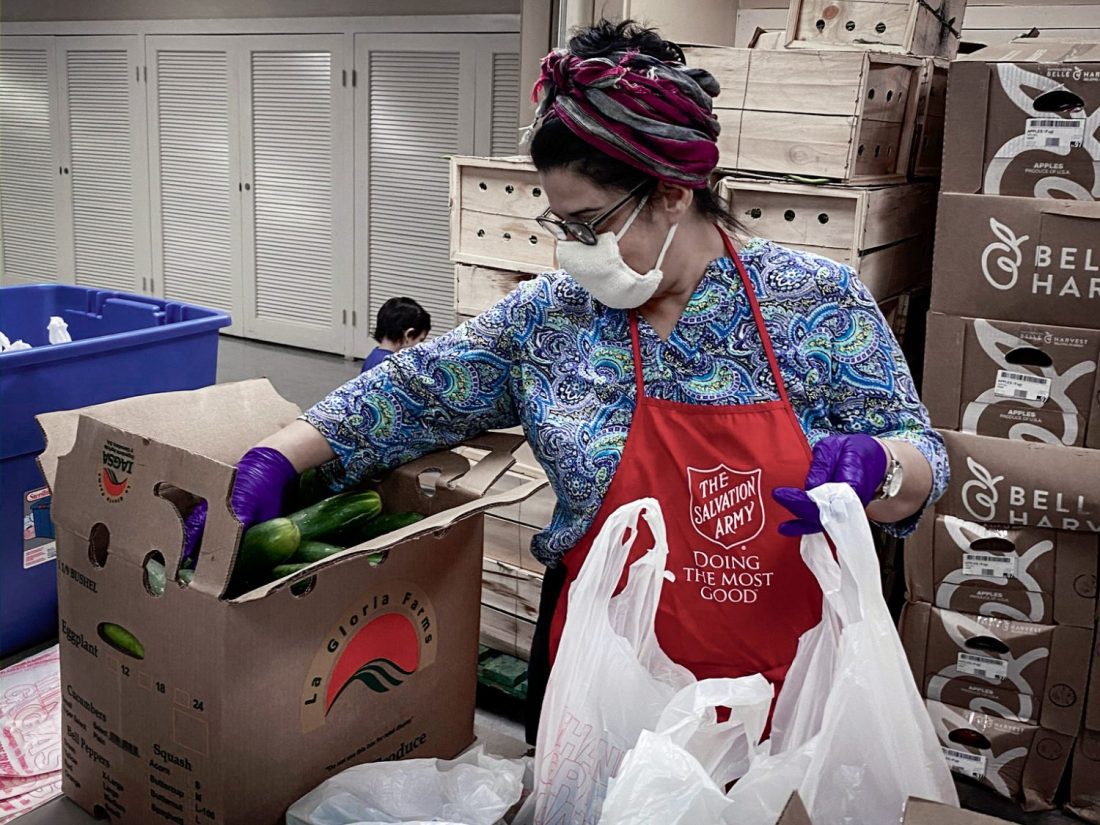 Western Territorial Commander Commissioner Kenneth G. Hodder held the 21st teleconference meeting regarding The Salvation Army’s response to COVID-19 May 1 with members of the Territorial Executive Council, divisional leaders and key staff, who joined in via Zoom from throughout the West.

This was the second meeting with a longer format, allowing time for questions, comments and idea-sharing. Meetings now take place twice a week, on Monday and Friday.

After a roll call of command heads, Hodder shared several announcements. The Salvation Army Western Territory, with its partner DEG, was recognized by the Email Experience Council—the premier organization for email marketing professionals, as the winner of the best overall improvement for email campaigns for the 2019 Giving Tuesday campaign, in which more than 49 percent over the prior year was raised. Hodder noted the importance of email, especially during the current crisis, and for the upcoming May 5 Giving Tuesday Now campaign. He thanked the ARC Command for the ad they have created and said it would be shared with the other commands.

Hodder shared some news about government funding. The territory is receiving significant funding from the Emergency Food and Shelter program. Applications are to be filed locally; THQ can help with the process. Word was received that The Salvation Army is not eligible for the Main Street Lending program.

THQ contracted with Deloitte to provide guidance on the FICA tax recovery process (Employee Retention Credit), which will provide refunds on FICA taxes being paid for furloughed employees. The money—about $1 million, will come back to the territory later in credits.

Intermountain Divisional Commander Major Mike Dickinson reported that the division’s third phone bank telethon is slated for May 5, conveniently coinciding with Giving Tuesday Now. Next week Dickinson is taping an interview with a different media partner, which will air May 10 as a start to National Salvation Army Week. In Jefferson County, the Army opened a new shelter, with 75 rooms available, for individuals experiencing homelessness and their families specifically affected by COVID-19; they must be referred by medical professionals.

“I’m delighted by the medical quarantine shelter you’ve put together,” Hodder said. “That is a unique service and the Army has a great opportunity there.”

The division’s planned giving director has secured gifts from 20 donors, which will bring in about $1 million. The division sent letters to government officials regarding CARE funding and reminding them of the work the Army is doing. The Harbor Light kitchen produces over 1,000 meals three times a day. About 500 meals go to other (non-Army) city shelters, representing about $1 million contract dollars between now and the end of May. The Greeley Corps Officers finalized a contract to provide 30 meals three times a day for a new shelter. In Aurora, the food box distribution is scheduled for May 12 at the Aurora Town Center Mall.

Northwest Divisional Commander Lt. Colonel Bill Dickinson reported that this week the division exceeded 100,000 meals served, more than 300,000 total food items served, more than 37,000 shelter nights provided and around 30,000 emotional and spiritual care contacts made. In response to letters sent to state governors, Idaho Governor Brad Little responded. He visited the Coeur d’Alene Kroc Center April 24, staying for about an hour and helping serve meals. He chatted with people as they drove through the distribution, and spoke with the corps officers.

Last week’s NFL Draft-A-Thon raised about $7 million. The Northwest Division will benefit from this thanks to the Seattle Seahawks, however, the amount the division will receive is not known at this point.

The Northwest Division held its Encore event online April 25 with 15 young people participating in five categories. The event drew 850 views and the performance of Adelaide Lyons has gone viral with almost 130,000 views. She sang “Count Your Blessings.”

Two shelters in Seattle have been moved to hotel space, the one in City Hall and the one on 4th Street. The Olympia shelter opens today, May 1.

Hodder thanked Dickinson for establishing a reopening committee and said he had never heard of an Encore performance going viral.

Southwest Divisional Commander Lt. Colonel Kelly Pontsler said the division is deeply saddened by the promotion to Glory of Captain Lisa Davey of the Casa Grande Corps. After the rest of her report, normal meeting proceedings halted while Colonel Colleen Riley prayed for Davey’s family and those affected by her passing.

In Las Vegas, the Army’s food distribution in partnership with The Church of Jesus Christ of Latter-day Saints is planned for May 15. Many partnerships are making this possible, particularly Zappos, which has agreed to host the event in its parking lot. Additionally, the Army approached Cox Communications through an advisory board member and will use its site for food box assembly and holding.

In the last two weeks, Subway has donated 1,200 sandwiches to The Salvation Army, which were used to provide lunch at four police departments in Tempe, Maryvale, Chandler and Phoenix to continue developing relationships with law enforcement.

The Southwest Division is preparing a funding request to the Arizona governor’s office asking for $500,000 for Arizona services and $500,000 for the Phoenix ARC out of state COVID-19 funds. For National Salvation Army Week, the division is planning a virtual giving drive with Arizona Family (channels 3 and 5). And the Gilbert Water Tower will once again light up red for The Salvation Army.

ARC Commander Major Henry Graciani gave reports from three centers: Fresno, San Diego and Bakersfield. In Fresno, all the men prayed for one of the beneficiaries’ father, who had COVID-19; he recovered. In San Diego, one of the men was feeling down because he had not seen his family for almost two years. After connecting with his wife via Zoom, his spirits have improved, and he said he knows he is the right place. The Bakersfield men were able to go to Camp Pine Summit at Big Bear, where they shared a unique graduation experience and helped clear trails. Thanks to their work, they’ve also established new trails. Graciani said being at camp was really “a holy experience” for them.

Southern California Camp Director Marty Brown posted on his Facebook page: “Our partnership with The Salvation Army ARCs is allowing camp to get some much-needed work done. We can’t wait until we can have people back at our camps.”

Hodder noted that the ARC Command has developed a detailed store-by-store plan for reopening the family stores. The Army wants to be very intentional in how this is done. Goodwill has reopened some stores, but they are currently not seeing too many customers.

CFOT Principal Major Nigel Cross reported that the college is halfway through the quarter; midterms are next week. The summer assignment chapel, led by Lt. Colonel Steve Smith, will take place May 4. The second-year Messengers of the Kingdom are preparing for their commissioning—memorizing The Salvation Army doctrines and beginning to pack. Finally, CFOT officers are happy because their water may be restored tonight.

Silvercrest Executive Director Susan Lawrence reported that the easing of some of stay-at-home orders is causing concern with Silvercrest staff. The Salvation Army has Silvercrest residences in nine states and many counties, so the orders vary by location, but most restrictions still require seniors to remain at home. She said this is confusing for the residents. The Silvercrests are being cautious in this regard.

The Silver Line continues to be used, both for good reports and expressions of gratitude, and also for emotional support. A toll-free number for Captain Joshua Sneed’s daily devotional is now available (855-697-4570) so anyone who wishes can call in for the devotion. Sneed also makes calls with the help of a team, including cadets, to residents who signed up for this service.

A time of discussion followed before Hodder closed the meeting in appreciation for the new life that the spring season brings. He read Song of Solomon 2:1-4, which he called “a love song from Christ to his Church,” the rose of Sharon. He then prayed, asking “in the midst of all we are facing, help us to raise our eyes to the beauty that is Jesus Christ.”