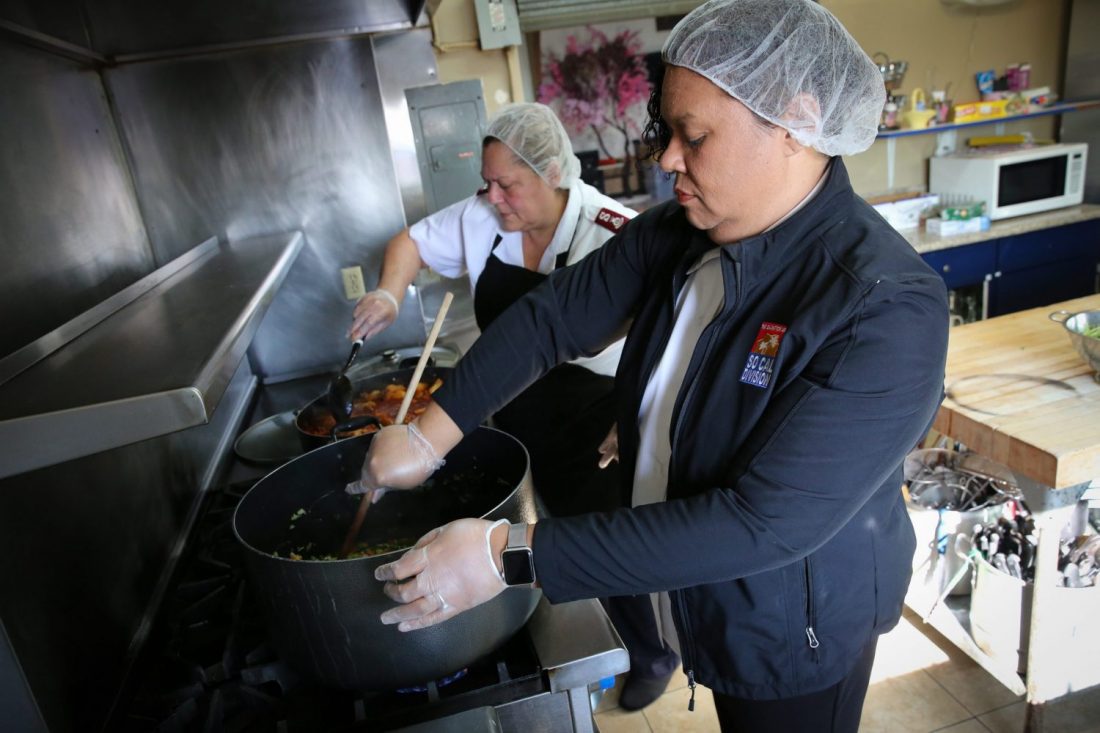 Western Territorial Commander Commissioner Kenneth G. Hodder held a teleconference meeting April 6 with members of the Territorial Executive Council, the 12th of such meetings regarding The Salvation Army’s response to COVID-19.

Limited participants met in the Territorial Headquarters boardroom, each wearing a mask, with divisional leaders and key staff joining from across the West by Zoom.

After a roll call of command heads, Hodder noted the release of Hollywood Temple Corps Officer Lt. Fredy Miranda from the hospital, after a two-week battle with COVID-19. California South Divisional Commander Lt. Colonel John Chamness added that Miranda shared his testimony of the experience over the weekend on Facebook.

Hodder also drew attention to the new text-to-give donation option from National Headquarters and said he would be sharing it in a new video.

This week, the command briefings will be held on Monday and Wednesday, April 6 and 8, with six commands reporting at each meeting instead of four. This will allow leaders to spend time on Good Friday with officers and other individuals working on the front lines.

Six commands gave updates: the Alaska, California South, Cascade, Del Oro, Golden State and Hawaiian and Pacific Islands divisions. Each reported an increasing need for food and heightened tension among both clients and staff as the crisis continues.

“I’m not at all surprised to hear that food is growing scarce,” Hodder said. “We’re all having to rely more closely on the Lord. The frustration of the situation, the fact that we’re descending into a very tension-filled normal…it is all very difficult.”

“Our services have just been increased dramatically—we’re seeing a dramatic increase in the need for grocery delivery,” Brackenbury said. “In some cases, officers are themselves delivering food from the grocery stores to the purchasers, along with Emotional and Spiritual Care.”

California South Divisional Commander Lt. Colonel John Chamness said the division, with the assistance of cadets from the College for Officer Training, prepped 34 pallets of dried goods and 10 pallets of fresh food for distribution this week to corps across the division, along with a supply of masks and gloves for each. In addition, the division delivered 16,000 masks to Los Angeles-area hospitals April 3.

The youth department put together an online Sunday school curriculum for kids over the weekend, and this week the division is distributing a care package, including masks and gloves to retired Salvation Army officers throughout the area.

To date, the division has distributed 36,000 boxes of food and meals and 16,500 diapers. It has eight shelters open and helped establish an 800-bed field hospital in Lancaster, California. Chamness said they’re also in discussions with the city about assisting with the field hospital being set up in the LA Convention Center.

She also noted that the Rose Center hired two local caterers to alternate weeks providing meals to its senior participants. The Newport (Oregon) corps is operating as a medical staging area for the coast. Two facilities are being used by local authorities—one for recuperative care and another to house people experiencing homelessness.

On April 3, which would’ve been the Friday night of Divisional Youth Retreat, Dihle said the Divisional Youth Secretaries instead held a virtual scavenger hunt, challenging youth to find items throughout their house.

“I’m not sure the parents enjoyed it, but the kids had a grand time,” Dihle said.

Del Oro Divisional Commander Major Ivan Wild shared that last week the Oakland (California) Chinatown Corps participated in #GetMePPE Bay Area and started the “Let’s Fight COVID-19 Together Project.” As a result, they were able to collect 10,000 medical-grade masks from individuals, churches, community clubs and other non-profits and donate them to area first responders. On April 1, they delivered 2,560 KN95 masks to Kaiser Hospital in Oakland.

Further, on April 2, The Salvation Army, in partnership with Paul Biondi, Alameda County Social Services Agency-Procurement Division, delivered nearly 900 pairs of men’s and women’s underwear and 1,496 pairs of socks for distribution to housing insecure individuals who are currently staying at local hotels, arranged by Alameda County.

The Salvation Army in Oakland has served more than 3,400 meals to the homeless, including 2,135 sack lunches, that have been delivered to local encampments and tiny home communities in partnership with Operation Dignity.

The Army also received a letter from a Nevada tribal nation, thanking the Army in Carson City for help with food delivery to its elders on the reservation.

In the Golden State Division, the division’s camp is providing food support to three area corps with 1,000 meals a day. They are working to open a day center in San Francisco for those experiencing homelessness, and waiting to hear what the Army’s role will be as the city works to house individuals in hotels rather than the Moscone Center as originally discussed.

Divisional leaders Majors Darren and Mary Norton are asking everyone to focus on prayer with a division-wide 8 a.m. daily united prayer time, Mary Norton said. “We are asking everyone to stop where they are and pray—with their staff, with their kids, wherever they might be,” she said. On April 8, each officer in the division is taking 15 minutes to cover 16 hours of constant prayer.

“I love the combination of physical and spiritual ministry you have,” Hodder said.

Hawaiian and Pacific Islands Divisional Commander Major Jeff Martin said they are in conversation with the local, state and federal government about facilities to be used across the division. Sixteen corps are providing emergency food bags and hot meals, and almost 3,000 food bags have been distributed through home delivery with more going out this week.

The division also partnered with the U.S. Coast Guard to combat food insecurity during the crisis, distributing food to those in need, including families who couldn’t apply for SNAP because of their immigration status.

In closing, Hodder noted the importance of yesterday’s Palm Sunday observance as the start of “the most critical time on the Christian calendar.” He said the word for the territory this week will be perseverance and read Psalm 46:1-2: God is our refuge and strength, an ever-present help in trouble. Therefore we will not fear, though the earth give way and the mountains fall into the heart of the sea.

“I pray that you will give us divine power and understanding and wisdom as we minister to those who understand the power of God, but perhaps have never experienced it,” Hodder prayed. “Let the message of Easter be foremost on our lips. Let the name of Jesus Christ be glorified in all we do this week. May it not only build the strength and resilience of the people we serve but may it build your kingdom.”